Did I ever tell you I have some really cute nephews?  Well, I do.  They are the cutest. I got to spend time yesterday with Hunter and Cole while I was visiting my grandparents.

When I got done with Saturday's 14 miler I had originally planned on taking a nap then packing up my apartment for the move, but I decided to go visit my grandparents instead.  I called my Maw-Maw to tell her I was coming over and she told me that the boys were coming over also for a few hours so they could babysit them while my brother in law went to work (he was on call).

I hadn't seen the boys in a few weeks so it was good to hang out with them for a few hours.  First we went outside to feed the ducks and geese at the neighbors house with grass and then we got some hotdog buns.  Cole wanted to see the ducks but once they got quacking he didn't want them anymore.  Hunter had fun throwing the bread to the ducks, he has a good arm. 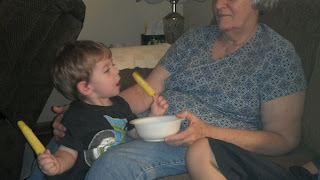 Then Maw-Maw and Hunter played a game of Domino's which Hunter is really good at.  I have never played Domino's, but apparently watching the two of them play, it is a game of strategy and competition. 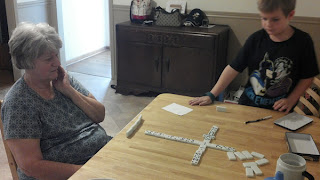 While Maw-Maw and Hunter were playing Domino's, Cole and I took a picture. The phone on my droid is not very good apparently. 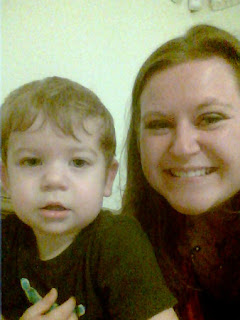 I took a really cute video of Maw-Maw, Paw-Paw, Hunter, and Cole laughing but I can't seem to get it uploaded past my phone.  I will hopefully be able to post it soon.

It was a fun day with the boys and my grandparents.  Hopefully I get to see all of them at Thanksgiving!  I am not sure exactly what we are doing for Thanksgiving yet and where we are going.
Posted by Stephanie at Sunday, November 04, 2012

Email ThisBlogThis!Share to TwitterShare to FacebookShare to Pinterest
Labels: my adorable nephews