How I Choose Which Sports Team To Root For

So, the Super Bowl is today...who are you going to root for?  I put $10 in a Super Bowl square pot so that is the only reason I will be watching (and maybe for the commercials).  It is in Houston this year, which I am excited about.  I tried and tried and tried to find someone who wants to bring me as their distinguished guest, but no takers.  Tickets are really expensive and I am saving for a house, so I decided to be an adult about things and not pay $4K for a ticket.  #adulting

Back on subject:  I have always had a plan on how I choose who I am rooting for in any type of sport team situation.  I have outlined it below for anyone who needs help choosing a team.  You're welcome. LOL.

Family-This RARELY happens (as in never) but I do want to leave it out just in case my family ever plays a pro sport. For now, the teams that fall in this category are all considered Little League teams, but it could happen one day.  I could marry a pro-ball player. :)  That means you, JJ WATT.

SFASU Teams-I won't bet against SFA teams.  Sorry, it won't happen even if I know we are going to lose (i.e. football).  Exception: if for some crazy reason my nephews or my niece decide to go to rival college, I will still root for SFA but I will wear a pin or something to signify that I am rooting for that one person.  I am not willing to do this for another family member. #truestory

Houston Teams-As a person who has lived in the Houston area for the majority of my life (besides 2 years in Philadelphia and 3 years in Nacogdoches), I will always root for any Houston team. H-Town is in my blood. I don't care if I move far away, Texas will be my team.

Texas Teams-I love me some Texas.  Everything is bigger in Texas and that includes our sports teams.  I have to support my Tejas.

Southern Teams-We just seem to breathe a different air down here.  IDK.  They are just closer to home.

And if there are no other teams that fit any of the criteria above, I will go with:

Best Colors of Uniforms-I am partial to purple and pink but those are rare in sports teams.  I choose based on the best color combinations

So...which team am I rooting on for the 2017 Superbowl? The Atlanta Falcons because they fit in the "southern" category.  Honestly, I don't care who wins but I have to pick one of them.   I might be a rebel and wear a Texans shirt though.

Posted by Stephanie at Sunday, February 05, 2017 No comments:

10 years ago, at 10 PM on January 25th, a group of SFASU students were anxiously awaiting a phone call.  Everything was set up and ready to go, a phone number, member shirts, a Dodge Magnum, fliers, a birthday cake, balloons and even a few people who had been waiting on this day for years.

Driving Jacks first night of operations were a go and all we  needed was a phone call.  We knew there was a need for Driving Jacks at SFASU (any college campus really) but we were still nervous that no one would call.  We set up a "just in case" person to call in but we never had to utilize that person because we got our first call not long after we "opened".  Apparently someone had been itching to be the first rider of Driving Jacks and went down in history.

I still can't believe it had been 10 YEARS!  That is so crazy to me.  I think it's more crazy that I have been out of school for 10 years more than DJ has been operating that long-I always knew it would be great once it started.

The Road Trip with Kali Claire
My parents needed someone to watch Kali while they were going out of town but I had plans all day.  In the AM I had to volunteer for my Rodeo committee, Special Children's and in the evening I was planning on driving to Nacogdoches for the 10th anniversary party.  I said, "I can watch her if she can go to Nacogdoches with me" thinking they would say no, but nope, they said yes!

Every time I have gone on a 'trip' Kali asks me if she can come too.  I always feel so bad saying no to that little face!  She was so excited to go on a trip and stay in a hotel. My mom even bought her a new little suitcase to bring with her.

We left the house about 2 pm and only made a few stops (chicken nuggets-Kali, Starbucks-me, restroom-both of us) and made it to Nac around 5 pm.  We checked into our hotel room that I had reserved by the phone.  Let me tell you, I will  NEVER stay at Days Inn in Nacogdoches again (see below for story).

Hector got to Nac shortly after we did and we headed to the park with Kali while waiting for Clarissa and Josh to get there.  We also had to pick up the cake at Brookshire Brothers before dinner.

Speaking of the cake.  Do you notice anything different here?  The bakery did a great job but ummm...it's supposed to be 10 years, not 90.  Same difference, right?  Haha.  They did do an amazing job on the logo though!! 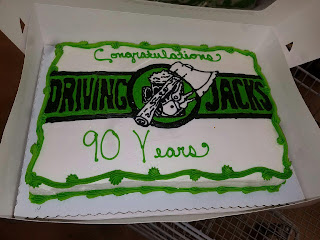 We made it to the party and it was super fun.  The news was there to do a story on the 10th anniversary and interviewed me.  I will not be posting it on my blog, but you can google it if you want on the Lufkin/Nac news channel.  I look awful and said "amazing" too many times.  Ugh, I always say stupid things in interviews!  I told my sister that if someone makes me into a meme for saying 'amazing' a million times, I will cry!  I tried to get Hector or someone else to take my place, but no one else did and they wanted to interview me since I was the President on the first night.


After the event we all went walking around the campus.  Kali decided that she wants to be Lumberjack and posed with Surfin' Steve. #axeemJacks 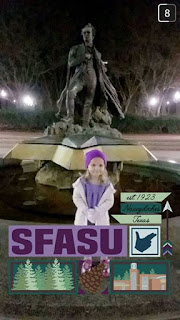 So, one quick story about Days Inn in Nacogdoches.  DO NOT book a room there.  There were bugs and the place was was not kept up.  That's not my biggest issue (though that is a huge issue).

At 2:30 am we were woken up by people shouting outside our window.  They were in a fight about something and I heard them say something about a gun.  I called 9-1-1 because I wasn't sure if it was a robbery or what was happening.  Someone kept saying "let me in" and "give me the money".  I wanted to leave right then but if it was a robbery and I opened the door to leave, he could have gotten me and Kali too.  I can't just drive away quickly without putting her in her car seat, plus she was sleeping and wouldn't be too much help getting away.  So we just stayed put and I was praying that we wouldn't get shot.

The Nacogdoches Police Department responded very quickly and diffused the situation.  I didn't hear what happened but in my brief glimpses outside I believe I saw someone being taken to jail.  There was a taxi cab outside and my best guess as to what happened was someone didn't pay their taxi bill and the driver was upset and trying to collect his money.  I don't know (I didn't want to go outside and ask just in case the friend of the guy that went to jail wanted to get revenge).

Anyway, the next morning we met back up with my friends at a local restaurant for breakfast/lunch before heading out.

Posted by Stephanie at Saturday, February 04, 2017 No comments: 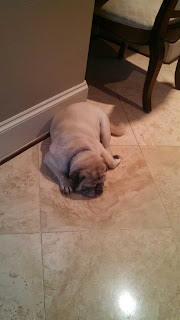 Dog sat for my Aunt while they were in Honduras.  He was really annoying me at first because he kept following me and peeing on the floor but by the end of the week, he grew on me. You actually can't help but love him because he is a special needs dog.  He was dropped on his head when he was a baby (seriously) and he can't hear, his tongue sticks out of his mouth permanently, he runs sideways, and doesn't understand things because of his brain being messed up.  He's too cute not to love (unless he just pee'd somewhere). 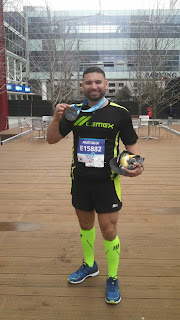 Watched Hector complete his first marathon!  I have a video of him walking backwards down the steps and an old man having to help him.  Too funny.  Go Hector! 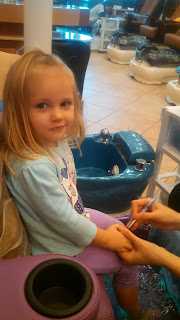 Took my niece to get a mani and pedi in the pedicure chair.  She enjoyed her spa day.

Celebrated the next 4 years with a new President! 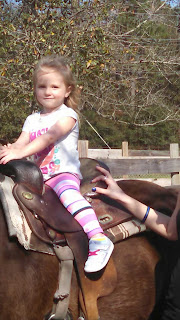 Took my niece to Old McDonald's Farm to hang out with all of the animals.  The horse ride was her favorite. 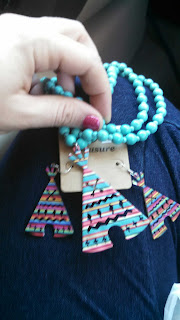 Got some new jewelry at Sam Moon!  I had a hard time between this design and a cactus design.  I choose this one after much internal debate. 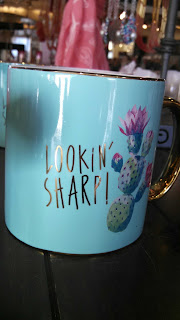 Found this cup at Charming Charlie.  I am thinking about making it into a t-shirt. 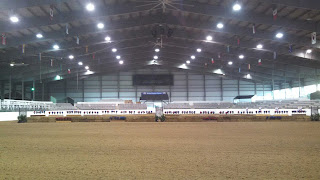 Volunteered for Rodeo Houston's Special Children's Committee at the Top Hands Horse Show.  This is my 4th year on the committee and I still love it!

Posted by Stephanie at Friday, February 03, 2017 No comments: