I had made plans with my friend from high school, Sarah, to meet up at Buffalo Wild Wings to watch the Texans game beat the Jacksonville Jaguars.  The game started at noon, but we decided to get their early to get a table before there was a big wait.  Luckily though, there was not a wait and we were seated immediately.  We ordered food and drinks, talked about our busy lives, and watched the game.  We decided we were going to go to the Dilliard's clearance center in the West Oaks Mall, but then Sarah got a call from her friend saying that she had two tickets to the Texans game if we wanted them.  Sarah's fiance didn't want to go with her so she asked me if I wanted too go.  Heck yes!

We got the tickets and headed to the Reliant to see the game.  We made it to Reliant right at the beginning of the third quarter.  We sat right behind the field goal at first, but then I remembered my parents had also gone to the game and texted my mom to see where they were sitting.  We headed over to their section and stayed the rest of the game over there. 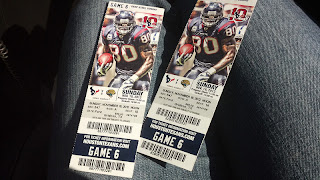 My parents and their friends left the game early because they had to take my Aunt Tracy to the airport, but we stayed sitting in that section.  The game was a nail bitter that ended up being tied 34-34 at the end of the fourth quarter.  What we thought was the end of the quarter was actually 1:30 left on the clock.  Apparently one clock wasn't working and two other ones were so they used the clock with 1:30 left on it.  After that additional time they were still tied so they went into an overtime quarter of 15 minutes.

Texans won the coin toss and the Texans got a three point lead within 5(ish) minutes.  The ball kept going back and forth between both teams.  Interceptions and touchdowns were the name of the game. Nail biter!  Finally in the last 2 minutes of the game, Andre Johnson scored the final touchdown of the game defeating the Jacksonville Jaguars 43-37.  The stadium ERUPTED in a huge wall of sound.  SOOOOO loud.

Both teams rushed the field exchaning handshakes and the media was there to capture interviews with the players before they went in the lockeroom. 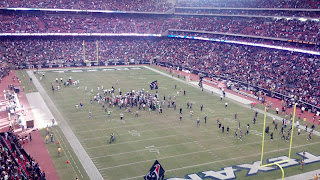 Even though my eardrums were ringing and my voice is hoarse from all the yelling, I had a BLAST at this game.  Thank you Sarah for inviting me!!! :)

Email ThisBlogThis!Share to TwitterShare to FacebookShare to Pinterest
Labels: Fun things I can say I have done