I just found this amazing video.  I cried watching them.  My goal is to be able to do this at Christmastime.

Email ThisBlogThis!Share to TwitterShare to FacebookShare to Pinterest
Labels: Christmas

Playing in the Rain

It’s raining in Houston!  I went to my parents’ house on Wednesday night to see my aunt who is in town and my nephews who were staying over and almost didn’t make it over there.  It took 2 ½ hours to get home and I almost flooded out.  My parents live off a major road and have about 4 entrances to the subdivision.  The main entrance was so flooded that even trucks couldn’t get through; one side entrance was blocked by the street so I couldn’t even make it to the entrance.

I went to the last one and saw water but I wasn’t sure how deep it was.  There was a guy backing out in an SUV so I watched him to see how deep the water was, but even after he made it safely I wasn’t 100% sure my little car could make it.  The guy said I could make it if I went slow but I think I had a look of doubt on my face.  He said “I wouldn’t send you if it wasn’t ok, I promise” so I took his word for it and went slowly….and made it!!  Yay!  I was safely inside the neighborhood, or so I thought because there were about 5 more puddles that I had to make it through before I weaved my way around to my parents’ house.   Luckily none of them were as deep as the first one so I got there ok.  Whew!

I got to my parents’ house and saw my mom and sister (my dad is/was out of town) both outside soaking wet doing something in the backyard.  Apparently the pool was not draining because of blockage to the pipe so they were out there in the pouring rain trying to clear a path for all of the water to drain.  Luckily they were able to get it clear and no water got in the house.  It really wasn’t close to being flooded but with the rain coming down so hard and a blockage, it could have risen quickly.
This has never happened before to their neighborhood or really the area that they live in but there is a theory floating around in all of Houston about the City taking bribes from contractors to develop areas but the contractors are not planning for proper drainage.  The water has nowhere to go and this is the 2nd year in a row that random houses that have never before in history flooded.  I heard today that there was a class action lawsuit pending.   Crazy!

We had three kids to entertain in the rain and we had originally had planned on going swimming, but we couldn’t do that. :/   BUT we did the next best thing, play in the rain! 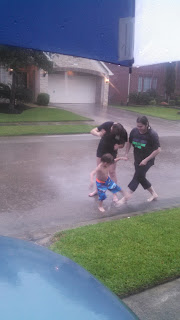 Let me tell ya’…it was SO COLD!  We all got clothes on (the kids got their suits on) and were splashing in puddles in the street.  At first my sister (who used to be fun btw) was being crabby and wouldn’t let my niece go, but then she decided she wanted to go so she let my niece go.  The neighbors were laughing at us and said that it looked like fun.  It was getting cold and it started lightening so we went inside, but all in all we were out there for about 20 minutes.  That’s longer than it seems! 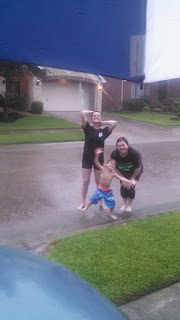 My aunt decided to stay at my grandparents’ house so I went through all of that water for nothing!  Well, not nothing, I got to see my family and play in the rain. :)
Later, when I was all warm, dry and toasty while watching Sponge Bob (yuck!) with the kids, my Mom calls my grandma and she said her house was about to flood!  The water was trapped in the backyard and the water was seeping into the house via the screen in porch.  My mom freaked out and we all got in the car.  My mom panics in these types of situations.  Usually I sort of do too, but I was able to keep level headed and gather supplies to bail out water if necessary.  All my mom said was “Grandmother’s house is flooding” and proceeded to freak out and get the kids together.  I didn’t really know if that meant the water was right there or if it was about to be so I just grabbed some hard plastic and medal stuff like coolers and pots in case we needed to lift up furniture (I couldn’t find milk crates!) and bail out water.

On the way over there we had to go a few different routes because we couldn’t get through, even with the huge truck that we were in.  We even saw an Expedition flipped over in a pool of water.  Craziness!  We made it to Grandmother’s and figured out how the water was trapped and that we could move a board in the fence to make the water drain.  Within a few minutes the water had receded by a few inches and was draining very quickly.  When we first got there it was up to my shin!  The house next door is vacant but we went ahead and did the same thing for their fence too so that house wouldn’t flood.  All of their water was flowing into Grandmother’s yard anyway it just made sense to clear a board for them too.  Hopefully there house wasn’t flooded before we got there!

We got home about 10:30 pm and I pretty much fell right to sleep since I had to go to work the next morning.  I woke up to get dressed but it was still raining.  I drove to the front of the neighborhood to see if I was still blocked in and I was.  I let work know that I was blocked in and told them that I would try again in the afternoon.  By noon the water had receded enough to let me through but it was about to get bad again (per the weatherman) and I didn’t want to get stuck somewhere just in case so I just took the entire day off.

That’s my flood story!  Hopefully everyone is ok!
Posted by Stephanie at Friday, June 03, 2016 No comments:

Email ThisBlogThis!Share to TwitterShare to FacebookShare to Pinterest
Labels: Family and Friends, flooding, In and Around Houston, my adorable nephews
Newer Posts Older Posts Home
Subscribe to: Posts (Atom)