On December 30th I flew to Roatan, Honduras for the New Year’s weekend. I had never been out of the country on a holiday before so I was excited to see how other countries celebrate.  (technically I was in Venezuela over the 4th of July but they do not celebrate the US’s holiday over there so I wasn’t going to count that).
My Aunt Tracy and Aunt Laura both greeted me at the airport with a Monkey La La at the airport bar.  We went straight to the West End section of the island to pick up my uncles and my cousin.  We just hung out the rest of the day and evening.  It is sooooo relaxing there!

The next day my uncle took me snorkeling.  I FREAK OUT snorkeling in Roatan because the water is so clear that you think fish are 4 feet away but they can really be 15+ feet away.  BUT, you don’t realize that in your head and you freak out. At least that’s what I do.  My aunt’s house has a long dock on it that has great snorkeling around it but you have to swim through turtle grass to get to it.  I know it’s irrational but it freaks me out.
Anyway, to fix my fear he made me hold on to a pink water noodle and he stayed with me the entire time.  I did freak out a little but not as much as I did the last time when I almost killed my aunt while snorkeling with her.  Needless to say, my entire family doesn’t go anywhere near me while snorkeling so it was quite a pleasant surprise when my uncle helped me. :)  My Uncle Roger always took care of us when we were little though so I shouldn’t have been surprised.   Thanks Uncle Rog!

That night we went to a restaurant in the West End called the Blue Marlin for their New Year’s Eve celebration.  I haven’t had so much fun on NYE before.  I am forever spoiled by Roatan.  The Blue Marlin had a steak and lobster dinner with champagne, fireworks and dancing…all for $40!  I usually spend between $100-$200 on NYE (depending on what I am doing) so $40 is awesome.  The food was awesome, the fireworks were bright, and the dancing was fun!  I can’t even begin to explain how awesome it was.  When I got sick of dancing (I only like to dance to songs I know) I would sit by the water and just listen to the waves crashing.  So peaceful on one hand but exciting from the music behind me.
The next day my aunt had invited several of her friends from the island over for lunch.  I was on my tablet when I saw a message on Facebook from my sister.  I couldn’t open it for some reason so I figured I would just wait until I could turn my phone’s wi-fi on.  I figured it was just a note asking if I was having fun.  A few hours later I was able to turn it on and saw that she had sent me a note saying that my dad had been having chest pains and was about to go in for surgery.  He had had a heart attack several years ago so this wasn’t the first time.  In the days leading up to it he had what he though was heart burn but since it continued for 3 days straight, they decided to go to the hospital.  It turns out that one of his stints had come loose and he needed it repaired.

I was a crying/sobbing mess that I couldn’t get anyone on the phone and I couldn’t get there.  There is one flight back to Houston a day and it left at 2 pm.  I didn’t have time to make it to the airport on time, even if there had been space.  I was able to get ahold of my sister and then my step-mom and they assured me that he was fine.  They had asked the doctor if they needed me to fly back right away but the doctor said he was ok and would be fine to wait until I got home.  I talked to him that afternoon and felt much better about being so far away.  It is so hard being that far away and pretty much helpless because you can’t catch a flight back.  People were starting to get to the house for lunch so I went upstairs after I talked to him to regroup.  Both my aunt and uncle came up to check on me and see how I was doing.  They’re awesome.

After a while I felt ok enough to go downstairs and be with people.  Sometimes you just need a few minutes by yourself after you get bad news.  We all ate lunch (including cabbage for money and peas for good luck) and then played games well into the night.  I brought the Bean Boozled game from Jelly Belly with me and it was a huge hit!  We all took turns spinning the wheel and eating good or bad jelly beans.  Some of the were really bad! :)  We all also played Cards Against Humanity which is hilarious!  I had played a few times before but I especially got into it for this game.

The rest of the weekend was spent relaxing on the beach or dock.  My aunt took me and her friend Jackie to this abandoned resort on the east side of the island.  It is still kept up really nice but no one goes there anymore.  There are guards at the front gate but if you ask nicely they will let you take a peak.  We stayed at the dock for about an hour just talking. 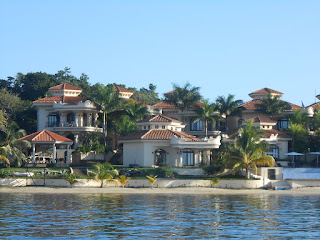 My Uncle Roger and Aunt Laura left Sunday afternoon and we left Monday afternoon.  I did get a chance to take a picture of this little fish that we think was protecting its eggs.  All of the snorkelers on the dock were complaining this little grey fish was biting them when they were getting on/off the ladder.  On the other side of the platform I saw a post that had a hole in it (that really needs repairing btw) and a little grey fish just swimming by it and chasing all of the other fish away.  I asked and they think it probably had laid its eggs in there and that’s why it was being so protective.  I couldn’t really get a good picture, but you can still sort of see. 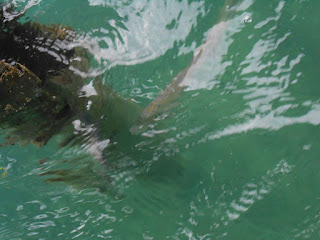 Posted by Stephanie at Tuesday, January 19, 2016 No comments: