I just realized that Thursday was my 4 year anniversary of graduating college.  4 years has seemed to fly by.  I was reflecting on where I am now versus where I was 4 years ago.  It’s depressing really.
Then:  I had $35 K in student loans.
Now:  I still have about $32K in student loans.  I can’t pay the interest fast enough to bring down the principal
Outcome: Depressing
Then: I got a job at a huge company thinking I could move my way up and have a career.
Now: At the same company in a different position and no chance of moving up
Outcome: Depressing
Then:  Started at said company making a low amount of a salary
Now:  Make almost the same amount of money-after two ½ years with the company I was finally able to get one raise.
Outcome: Depressing
Then: No boyfriend
Now: A guy that I have had a crush on for 3 years that doesn’t notice me no matter what I do or say.  Oh, and he thinks I’m obnoxious.  I am forced to see and talk to him everyday until God moves me out of here.  I like talking with him and seeing him, but it hurts me everytime I do.
Outcome: Depressing
Then: Not going to church
Now:  Found a great church and have made lots of friends
Outcome: Great
Then: No pet
Now:  Coolest cat on Earth, Jabba the Hutt
Outcome: Great
Then:  1 adorable nephew
Now:  3 adorable nephews
Outcome: Great
Overall, the last few months have been great in terms of church and meeting new friends.  Financially and career wise though things are not going well.  God has a plan and will provide for me as I need it.  I just need to keep faith.
Posted by Stephanie at Friday, May 13, 2011 No comments:

This weekend for Mother’s Day we went over to my Mom’s and hung out for a few hours.  I only got to spend a little time with her since we went to my sisters house to visit the new baby (who is soooo cute!).  I plan on going over there more next weekend to spend time with her.
Cole in the bean bag chair.  My sister says he sleeps there a lot of the time, since he doesn’t move much it’s easier.  I asked her and she said he’s only slept in his room once, the rest of the time he’s in my sisters room sleeping in there.  He is so tiny compared to the bean bag chair, but to be fair the bean bag chair is larger than average. 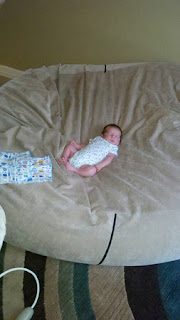 Drunk on milk!  Ha ha.  He is so tired, but we kept trying to hold him and keep him awake.  This is his passed out face. 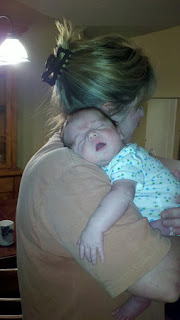 Email ThisBlogThis!Share to TwitterShare to FacebookShare to Pinterest
Labels: Family and Friends, Holidays and Special Events

The thrill of the hunt

Some men like to hunt deer or bears or other defenseless animals.  Single women?  They like to husband hunt.  Yep.  Husband hunting is a sport on all women’s do to list at some point in their lives.  They might call it dating or going out with guys, but it’s husband hunting.
Recently a little voice inside my head has been telling me to stop husband hunting.  That little voice is God tell me no.  I don’t know if he wants me to stop looking because he doesn’t want me married right now, or because he wants me to open my eyes to someone around me.  I know that God will bring him to me when the timing is right.
Everytime lately when I am out in public and I see a cute guy the little voice in my head tells me “no husband hunting”.  It’s crazy!  It happens everytime!  Sometimes I quit looking, other times I continue to look anyway. Bad. Bad. Bad.
So yesterday my C.A.R.E. group from went to in Pearland for a BBQ.  I looked across the park and saw a cute guy playing Frisbee with his two dogs.  Everyone always says it’s a good sign that a guy is at the park with his dogs.  Naturally, I started walking over just to ‘watch’ him playing Frisbee.  As I was walking over the little voice said “No husband hunting”.  I paused for a second then I decided to keep walking (disobeying God).
The guy noticed me and started walking towards me.  I asked him about his dogs and he answered me.  Automatically I could tell that he was gay!  Very gay.
Two things I learned from this story.
So for the sake of all you men out there (and single women), I am not going to husband hunt anymore until God says it’s ok for me to because we need straight guys to marry.
Posted by Stephanie at Thursday, May 12, 2011 No comments:

Email ThisBlogThis!Share to TwitterShare to FacebookShare to Pinterest
Labels: My Dating Life

Today is Star Wars Day!  May the Fourth be with You! (get it? he he).
My nephew Hunter is a HUGE Star Wars fan.  Here is a picture of my nephew and I about a year ago making Star Wars cookies.  They don’t look to appetizing, but they were actually good.  Our teeth were black from the Darth Vadar icing.  Yummy cookies. 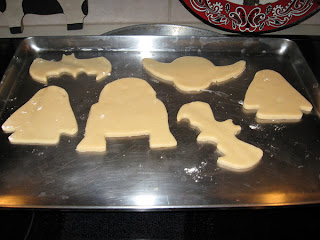 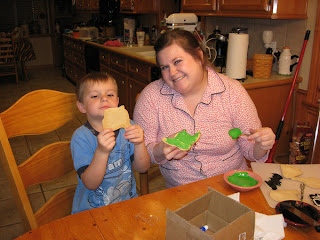 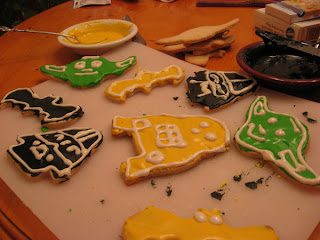 William Sonoma has Star Wars items for sale right now like pancake molds and cookie cutters.
The blog Just Jenn Recipes has a ton of Star Wars related food posts.  The author and her son are both Star Wars fans.
Posted by Stephanie at Wednesday, May 04, 2011 No comments:

Email ThisBlogThis!Share to TwitterShare to FacebookShare to Pinterest
Labels: Holidays and Special Events

It seems like everytime I turn on the news the past few days there is a new detail regarding the Osama Bin Laden death.
Mostly though it seems they are celebrating his death.  I am conflicted because on one hand I want to see justice for the victims of 9/11, but on the other hand I do not want to celebrate anyone’s death.  It just seems wrong.  Yes, he was a bad guy but do two wrongs make a right?
The bible says:
“Do I take any pleasure in the death of the wicked? Declares the Sovereign LORD, Rather, am I not pleased when they turn from their ways and live?” Ezekiel 18:23
I want them to believe in Jesus, but I don’t want to kill them or put harm against them if they don’t.   The victims of 9/11 do need justice, but who is meant to carry out the justice?  God will judge them; it’s not my place too.
Love the sinner, hate the sin.
With that being said, God Bless . 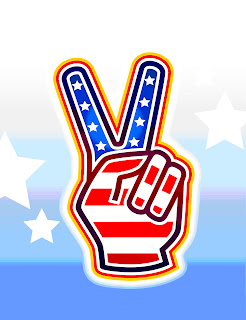 I am overall a pretty simple person, though I have been told I am high maintenance...which I am NOT!  Here are a few of my favorite things, in random order. 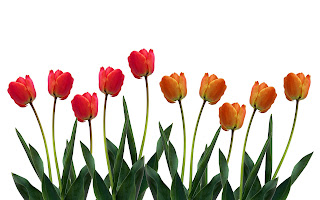 Flamingos-Not much to say about these-I've loved them since I was little. 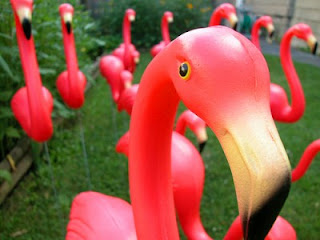 Jabba the Hutt-He's the coolest cat around so he is loved.  Don't you love his Easter bunny ears? 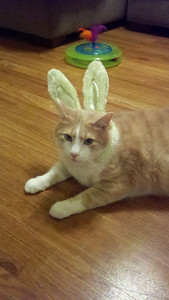 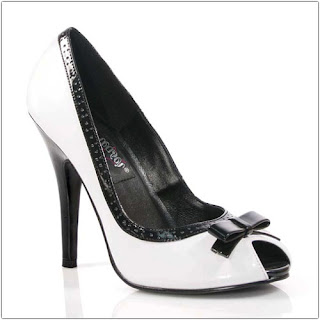 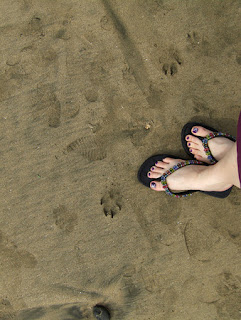 Glitter-Who doesn't love glitter?  It's part of my happy place. 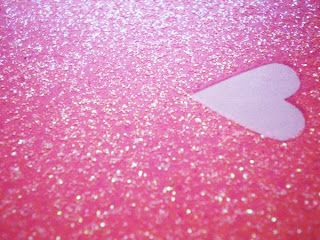 Sunscreen-Why didn't I think about that BEFORE I went to the beach and got sunburned. 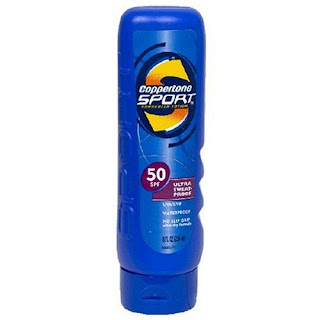 Bluebonnets-They are the State of Texas official flower and they are so beautiful. 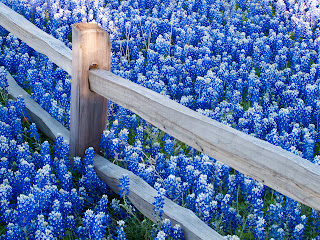 That is all for now, I will post more of my favorites later!
Posted by Stephanie at Monday, May 02, 2011 No comments:

Email ThisBlogThis!Share to TwitterShare to FacebookShare to Pinterest
Labels: About me

I had a great weekend!  I went to the beach and got super sunburned (not so great) on Saturday and on Sunday I went to the March of Dimes 5 mile walk at U of H (and got sunburned there also). 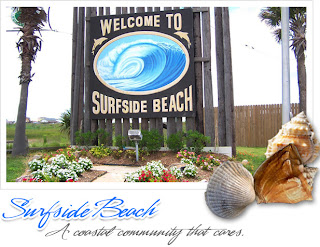 We went to Surfside beach, which I had never been to before.  Surfside is so much cleaner than Galveston and it is not as crowded as Galveston, which makes it much quieter.  You don't have to worry so much about being hit with a frisbee, which is alwasy nice!  I watched all the surfers try and ride the waves.  Did I surf you ask?  NO!  I am clumsy just walking, I can only imagine what I would be like if I had to try and balance on waves and a slippery board.  No, thank you.

The March of Dimes walk was great, I went with work and got a free tshirt!  I love free stuff, it makes me happy.  I was in charge of pictures so everytime we spotted a tshirt from our group, I made sure to run ahead and snap a pic.  Afterwards, they served hamburgers and chips.  My new favorite chips are salt and vinegar...ewwww right?  No, they are so good!  At first they taste funny, but then they really grow on you.  So now every time I eat chips (which isn't often) I try and hunt down some salt and vinegar ones.  Weird.
Posted by Stephanie at Sunday, May 01, 2011 No comments: