For Thanksgiving I went to my sister's in-laws ranch in the Hill Country of Texas.  My sister and I usually go Black Friday shopping, but this year since she was going out of town we wouldn't be able to go.  :/  She had asked everyone that was going up to the ranch if they wanted to go shopping with her, but they didn't so they suggested that she invite me for Thanksgiving and she did!  Shopping was all set.

I am not a fan of driving at night so I was going to drive up early on Thanksgiving morning, but since the ranch is in the middle of nowhere and really hard to find unless you know where you are going, I decided to follow them up there.  I left my house around 6 pm and met my sister at Buc-ee's to follow them the rest of the way.

We got to the ranch around 11:30 pm and I went promptly to bed, I was a sleepy girl!  They have an apartment above the garage where we all stayed.  I slept on the couch and woke up to a bear head staring at me.  The rug was on the floor and my nephew loved it!  He wanted to sleep on it. LOL.  It is quite frightening waking up to this thing when you are in a sleep daze. 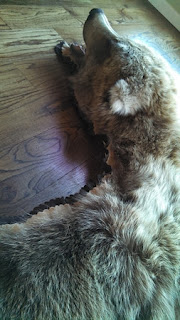 The next morning I woke up and hung out with my nephews while waiting for everyone else to get to the ranch for Thanksgiving.  The ranch's driveway is about 1.5 miles from the main road so I decided to get in a quick run of 3 miles before lunch.  While I was gone, my sister made deviled eggs and pimento celery for us since those are Thanksgiving staples! :)  We ate lunch about 3 pm and I ate entirely too much food!  Ugh, gotta run off those calories. 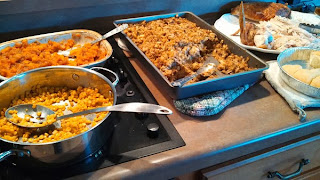 What does a picky 2.5 year old eat for Thanksgiving?  Doritos, bananas, and a roll with a sippy cup of course.  There is a bit of sweet potato casserole that I tried to get him to eat, but he didn't want any part of it. 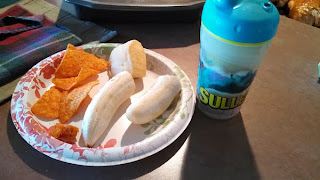 I was in a turkey and stuffing sleepy state but didn't have time to take a nap because of Black Friday shopping.  Laura's mother-in-law brought papers from both Houston and San Antonio with her so we could view the ads and make a war plan strategy before we left.  Armed with about 20 ads of stores we wanted to go to (we didn't go to them all), we set out about 4:30.  The ranch we stayed at is about 1.5 hours from San Antonio, and the first store we wanted to go to opened at 6 pm.  Yes, we were one of those people! I will update more on my Black Friday deals I got in another post!

We got home about 1:30 am from Black Friday shopping (we didn't make it past midnight shopping) and I woke up the next morning to Cole running out of the apartment (upstairs!) in only his diaper.  He had seen his grandma out of the window and wanted to join in on the action, no more sleeping for him!  I thought my sister was still in the apartment, but apparently she had gone downstairs while I was sleeping so I got his dressed and brought him downstairs.  I couldn't go back to sleep after that so I got dressed too.

I had to find a rock so I could make a You Rock Rock so Hunter and I went out of the 4-Wheeler (he drove) to find me one.  Forgive this picture, I have no makeup on. 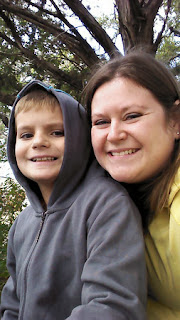 We finally found a rock that works and came back to the house.  Hunter was given a set up binoculars as a present from his aunt and uncle and Cole decided to take them from him and play with them.  Cole loved the binoculars and pretty much became a peeping Tom after he discovered the joy of them.  Even after I told him how to hold the correct way, he decided he didn't want to hold them correctly. 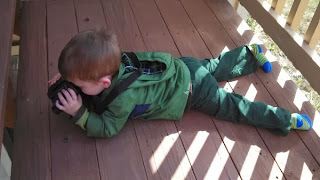 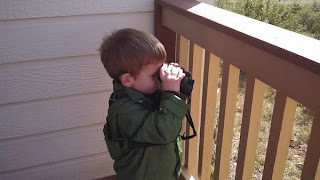 I left around 5 pm on Friday to get home to my baby boy that couldn't care less that I was gone.  Brat! :) I had so much fun at the ranch, it is so peaceful there!

Posted by Stephanie at Saturday, November 30, 2013 No comments:

Email ThisBlogThis!Share to TwitterShare to FacebookShare to Pinterest
Labels: Family and Friends, Holidays and Special Events, my adorable nephews

For Halloween this year I decided to give out silly straws instead of candy this year. The main reason I did this was because I didn't want any leftover candy to be at my house for me to eat!  I meant to upload these pics awhile ago, but I forgot they were on my phone!  I took these with my phone's camera so they aren't the best, but they will get the point across!

I already had the silly straws at my house that were unopened (long story but I have 50+ of them) in their packaging so I just printed out some Halloween images (my printer is out of colored ink) in black and white to attach with scotch tape to the straws.  I made these last minute, so please excuse How sloppy they are cut out! 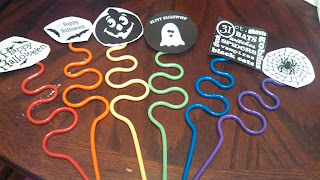 Then I added them to a bowl to keep the upright while waiting for the kids to come trick or treating! 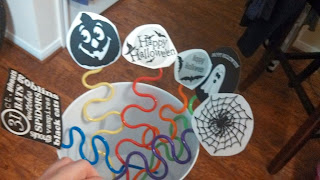 However, we did not have any trick-or-treaters at my house (apartments) so I have some random silly straws with Halloween stickers on them! :)  Oh well, I love silly straws and will drink out of them anytime.
Posted by Stephanie at Thursday, November 14, 2013 No comments: 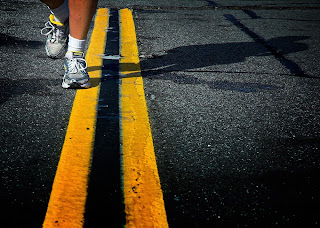 
There will be many changes to the run this year and we will be making more announcements soon about the details. We can't wait to fill you in on all the details, so stay tuned! :)
(Hint:  It involves COLOR!)
Posted by Stephanie at Wednesday, November 13, 2013 No comments: