Where Art Thou PSL

I have been soooooooo patient.  So very patient.  This hot weather is driving me crazy but I will really miss it and be complaining (sorry, but get ready for it) when I am freakin' freezin' in Jan/Feb.

I WANT A PUMPKIN SPICE LATTE, DARN-IT!!!!!  I have been googling and stalking the Starbucks official FB page but no mention of my favorite treat in 2015.  I only get a few of them this year because I am on a #VegasDiet through our trip in early November. 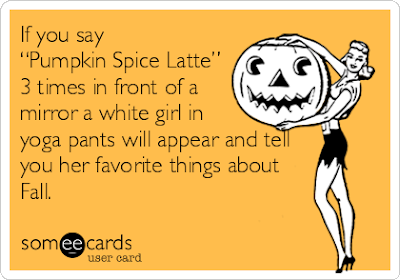 Let me tell you about my favorite things about fall...

Posted by Stephanie at Tuesday, August 18, 2015 No comments:

On Saturday night I went to the George Observatory in Brazos Bend State Park to view the stars with two of my friends.  Ohhhhhhhhhhhhhhhhh wait, wasn’t that a #BucketList item??????  Yep!!!  I am ON A ROLL! :)

We got there around 7:15 pm (it’s about 1.5 hours from Houston) and went straight to the gift shop to see if there was an ornament to add to my collection.  I try and get an ornament each time I complete a bucket list item or travel to a new place.  There weren’t any ornaments at the gift shop, but there was a patch that had the observatory, so I just bought that.  My options were a patch or a pencil, I chose the patch. :)  I can easily add a ribbon to the back to make it an ornament.

We had a few minutes to walk around so we went to the lake/swamp to see if we could find any alligators sticking their heads out of the water.  We didn’t have any luck but we did see several huge frogs.  We were looking away from the lake when we heard a huge splash.  By the time we whipped our head around, whatever it was went back into the water, but we could still see the ripples.  It must have been either an alligator or a big fish.  Who knows. 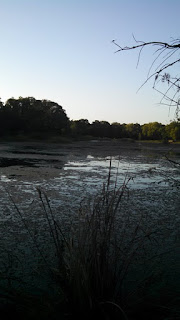 The light poles have little information boards about different stars/planets/constellations/asteroids. 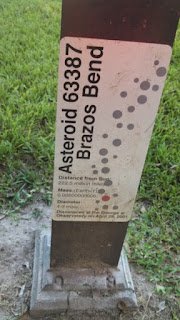 We went to a short lecture (about 30 minutes) at 8 pm where they tell you a little information about what you will be seeing in the telescopes.  A lot of it went waaaaaaaaay over my head (even though I took two semesters of Astronomy in college) but it was interesting.

After the lecture it had turned dark and we got in line for the big telescope.  There are three dome stations (2 small and 1 large) and also several amateur people with their telescopes too.  They take a group of about 10 people in at a time to the big telescope and let you look through the really powerful machine.  After an 1.5 (ish) hour wait, we finally saw a globular cluster.  This cluster was in the Hercules constellation, but I am not sure which one it was.  I think it started with an M. 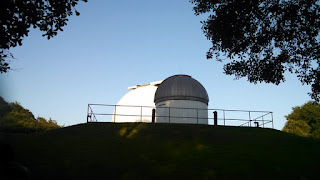 Anyway, they said that it had about half a million stars in this cluster.  They didn’t count each star because the stars are constantly moving and they can’t tell if they counted one or not.  To guesstimate the number of stars, they took a picture, counted the stars within the picture and used the size to make an educated guess as to how many stars are in the cluster.  Pretty cool. 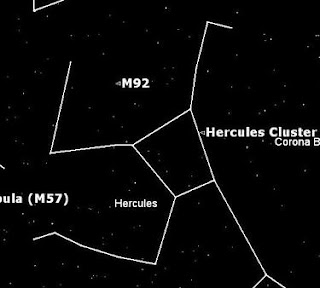 One more thing:  BRING BUG SPRAY!!!!  OMG.  Seriously.  I was being bit by mosquito after mosquito, even through my pants!  We bought some mosquito repellent wipes but they were still snacking on us.

Email ThisBlogThis!Share to TwitterShare to FacebookShare to Pinterest
Labels: Bucket List, Fun Places, Fun things I can say I have done

My niece, Kali Claire, turns two today!!!  I love you sweet (bratty) girl!  I am so glad that God brought you into our life a year ago when you moved here.  I am very honored to be your Aunt Steffie.

I buy a lot of her clothes (I can't help it, the clothes are so cute!) and the other day she was wearing a cute flamingo outfit that I bought (duh!).  I said "Oh, Kali Claire, who is your stylist?  That flamingo outfit is really cute." and she said "Steffie".   LOL. 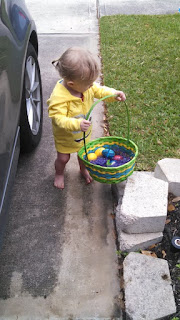 Posted by Stephanie at Wednesday, August 05, 2015 No comments:

FYI:  I changed my picture page to this link instead of the old one.  Go here for more pictures.

Last weekend I traveled to Los Angeles with work to host a special cocktail reception for some of the Special Olympics delegation that were in town for the World Games. I flew in on Friday morning and the reception was that night.  The next morning I took an Uber car to Universal Studios in Hollywood to spend the day there.  Originally one of my co-workers was supposed to come with me, but she had to change her flight to that day for a family issue, so it was just me at the park! 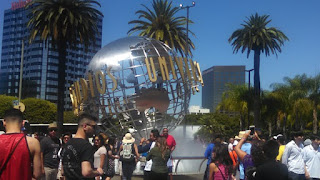 I honestly liked being on my own at the park.  I didn’t have to ask anyone what they wanted to do next or where they wanted to eat, I just did what I wanted to do.  Honestly, the longer I’m single the more selfish I grow. LOL. :)  I was able to go in the single rider line for all of the rides I went on, which helped with the mammoth sized crowds that were there that day.  So. Many. People.   At around 1 pm that day, the wait for The Mummy ride was 170 minutes.  CRAZY!

The first thing I did was eat lunch at the Krusty Burger in Simpson Land (Town??).  My options were fried food or fried food at all of the locations in the park, so I just tried fried food. LOL.  Who doesn’t love burgers?!  I then went to Moe’s Tavern for a “Flaming Moe” which is an orange soda that I think has dry ice at the bottom.  You get to keep the cup, but I didn’t have a bag to put it in, plus I don’t like souvenirs like that anyway. 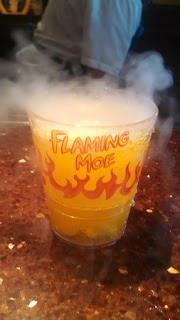 I went to the Studio Tour line and it was REALLY LONG.  There were a few employees giving away fast passes for the tour later in the day so I got one.  He asked me how many people and I said just me, but then he said just go to the line and tell them you are a single rider and they will let you in a special line that gets you close to the front of the line.  That worked and I got on in 10 minutes!!!  It pays to be by yourself! :) 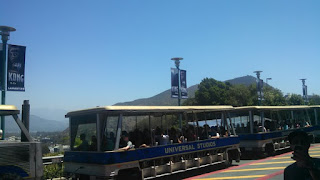 I really liked the tour, they did a great job showing you around.  You stay on the tram the entire time but you see a lot.  You see the back lot, the front lot, Jaws, WhoVille, New York sets, etc.  So much!!  The tour lasted about 45 minutes and they pack in a lot of stuff.  There were 3 ‘rides’ on the tour where you experience different special effects.  Two of the ‘rides’ (King Kong and Fast and the Furious) use special effects and green screens to enhance your experience but the “Live Movie set-Subway tunnel) has fire, rushing water, breakaway buildings and more.  I think the subway set ‘ride’ was my favorite!

They take you to see the streets of New York, a little Mexico town (with the flood waters), a western town, and even the town square they shot Back to the Future and Ghost Whisperer!  We went to the sleep little town in Jaws and saw a shark attack a poor, innocent scuba diver and then the shark had the nerve to try and attack our tram!  :)  I’m telling you, I loved the tour!!! 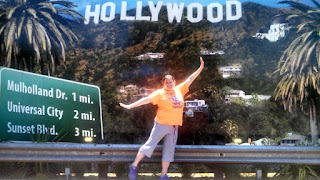 I went through the iconic Jurassic Park gates next and got SOAKED on the ride.  I went through the super-fast single rider line and unfortunately I made it to front of the car where you get the most wet.  Oh well, it was awesome though. At first the ride is much like the movie with it’s serene dinosaurs just eating grass but then things get wild and crazy with sparks flying and evil Raptors.  Those raptors like to eat anything!  So scary. 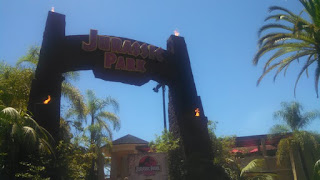 Transformers Ride, PowerAde Break, Ice Cream Break, attempt to ride the Mummy Ride (failed my mission), and then decided to take a break to see a movie in hopes that they crowd would disperse while I was watching Train Wreck.  I ate dinner and bought souvenirs somewhere in that break too.  I started to collect these different stretched pennies that day! I need to get one of those books to hold them in. 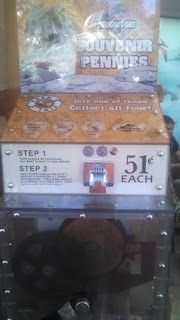 When I got back I went back to do the nighttime tour that was recommended.  I am SO GLAD that I went on the tour again because I saw so many things that I didn’t see the first time.  You do the basic stuff and ‘rides’ but there are a ton more lights with added special effects throughout the tour.

I went on the Shrek attraction and then called it a day to return to my hotel to sleep before my super early 4 am wake-up call.
Posted by Stephanie at Saturday, August 01, 2015 No comments: