Edit:  We made another door this year to compliment another departments door.  It's really funny, See it here.

Each year my work has a door decorating contest at Christmas time.  Each department gets on 'official' door to decorate and mid December we have a contest to see who is the winner out of three categories 1.  Most Creative  2.  Most Christmas Spirit 3.  The People's Choice.  There are 8 teams participating this year so we have a decent shot at winning!!

I looked at the pictures from the past few years and then googled' Christmas door decorating' for ideas.  I knew I wanted something fun, but it didn't necessarily have to be oil and gas related.  I found three different ideas and narrowed it down from there.

I decided to go with a reindeer themed door where the reindeer got caught up in the Christmas lights and is dangling from the ceiling (I got the idea from Pinterest).

First, I had to figure out how to draw a reindeer.  When I was younger I used to be a really good drawer, but then I broke my arm twice and couldn't draw anymore (plus, now I have bad handwriting also).  Luckily, I work with the IT Department (and Accounting) so they helped me get a projector set up so I could trace a reindeer the size that I needed.  I had gone to the teacher supply store to get big sheets of butcher paper and Hobby Lobby to get a few other random supplies. 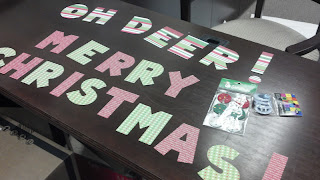 After I added the plain white to the door (at the end it needed more color so I would suggest another color background) and cut out the traced reindeer I taped the reindeer to the door.  The lights needed to hang from the top of the door so we ran them on the inside of the office with a extension cord.  We taped the body of the reindeer but left the legs, arms, and head not taped until we could string the lights around them, then taped it. 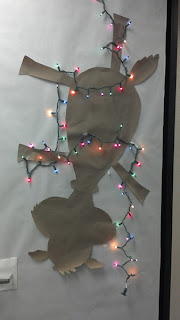 Next, we added all of the accessories to the reindeer like his hoofs, antlers, nose (red glitter scrapbook paper), eyes (squiggly eyes that move), collar, white on tail and chest, and the inside of the ears.  While at Hobby Lobby I also found some scrapbook stickers that looked like Christmas tree ornaments and stuck them on the antlers. 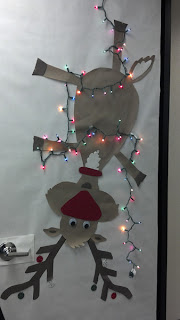 Then I added Oh Deer and Merry Christmas to the top and bottom.    My company is a private company that says ‘Merry Christmas’ instead of Happy Holidays. :)  You gotta keep 'Christ' in Christmas! 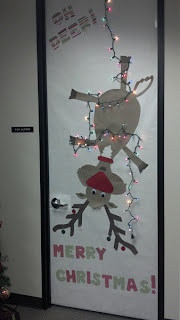 Here is a close up of the letters.  I chose three different scrapbook papers from Hobby Lobby and the red letters actually say Merry Christmas in small font.  Love them!  After I got the paper I went to the teacher supply store to cut out the letters with their die-cut machine.  It was a lot simplier instead of tracing out the letters and cutting them by hand.  Between the butcher paper and letters I only spent $7 at the teacher supply store (the actual scrapbook paper was more at Hobby Lobby though). 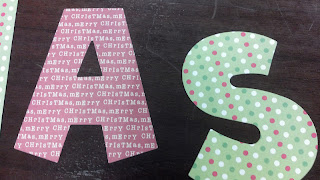 When I was done I decided it needed more color so I added the red glitter trim around the sides.  I found it in the supply closet from last year I guess. 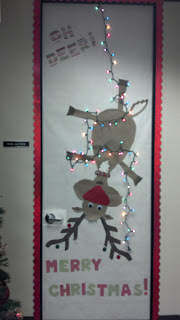 So, what do you think?!  Hopefully we win!!  I have seen a few other doors that are finished and HR's so far is the cutest.  It is Santa in a hot tub with a melted Frosty the Snowman floating in it.  It says "who's bright idea was it to invite Frosty to the party? " Then is says "HR wanted to include everyone." haha.  I think that might win!  But then I was telling some of my friends and family about it and they said why don't you put a new door up that has a woman snowman and two child snowman with a sign that says "Husband died in a workplace accident, please help". I think I might do that! haha.


Edit:  We made another door this year to compliment another departments door.  It's really funny, See it here.
Posted by Stephanie at Tuesday, November 20, 2012