I’ve been slacking on writing blog posts lately, but honestly, when have I ever been great at keeping up with my blog?  Have no fear, here is a list of stuff that I have been doing lately! 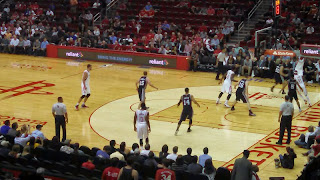 Rockets vs. Spurs game
My friend Tracie was given two free tickets to the Rockets vs the Spurs game a few weeks ago. So fun!  It was only the 2nd ever Rockets game I have been to.  It was a pre-season game, but the Rockets still won!  Whoo-hoo!! 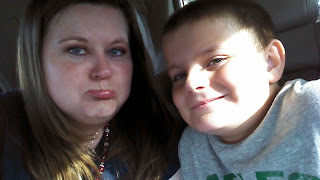 Houston Texans vs. Philadelphia Eagles
My brother in law got us tickets to the game.  We (me, my sister and bro in law) all love the Texans and my nephew loves the Eagles.  Three against one but we still lost.  BOOO!!  That’s ok, Hunter only gloated a little bit.  This picture is of me being sad that we lost and Hunter being happy about it.  That kid! :) 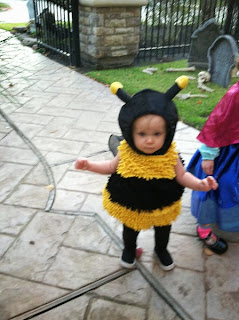 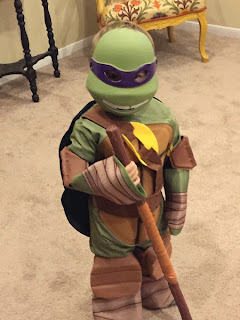 Halloween pictures
Halloween was on the same night as the BOTPW cocktail party (see below) so I didn’t get to hang out with my nephews and niece.   However, I have a few pictures!  We had a bee and a ninja turtle.  Hunter doesn’t like to dress up (never has).

BOTPW Cocktail Party
I was at a cocktail party for BOTPW on Halloween night (free food!)  Each year SFA and SHSU play a football game at Reliant Stadium.  They are both large rivelry schools, sot it brings out a large crowd of alumni and current students.  The night before the game, there was a cocktail party at the host hotel and you could mingle with other SFA alumni and faculty.  It was super fun! My friend Teri met up with me and afterwards we went shopping. 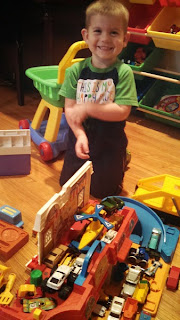 “Awesome”
I was over at my dad’s house and hanging out with my nephew, Cole.  We were playing with all the toys and he added all these cars to this village thing.  He was so proud of himself and said “We should take a picture of how awesome this is.”  So I did!  Totally awesome dude. 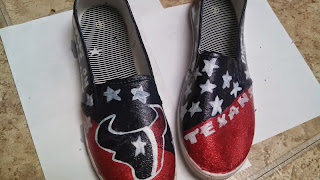 
Did you know I can paint?!  Ha!  Well, I have been wanting some Texans shoes that I saw on Etsy, but they were $100!  I was not about to pay $100 on something that I ‘thought’ I could make.  I made a pair and they didn’t turn out too bad, but they aren’t perfect.  I like them though. 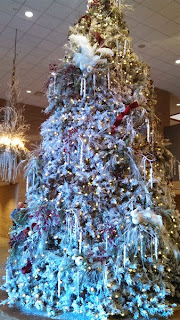 Too Early?
Is it just me or is it too early for Christmas trees to be put up!  My church had all of their decorations up this past weekend and I thought it seemed to early.  Maybe it's just me that thinks that!  I think the tree is beautiful though. Houston's First always does a wonderful job on decorating for Christmas.
Posted by Stephanie at Thursday, November 13, 2014 No comments:

Each year I try to donate a gift of some sort to a charity that helps people.  In the past it has been an angel tree, a box to the troops, animals, etc.  This year I am doing two different things (maybe three).  1.  I am giving two boxes filled with boxes to Samaritan’sPurse.  2.  Christmas gifts (several) to HFBC ChristmasStore.  3.  (maybe) A box of goodies for the troops serving in a foreign country such as Afghanistan.

***I am showing you the boxes so you will know an example of what to put in them.  I am not trying to boast about what I am giving (which I personally think defeats the purpose of doing good).  I am donating other stuff, but I don't want anyone to think I am bragging about I am donating.  I honestly don't have much to give, but I want to share some resources for others to give. 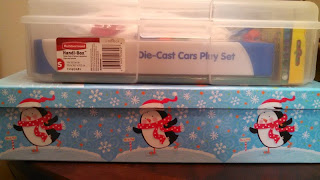 I used some boxes that I had at home.  Note that you won't get your boxes back.  Some drop off locations have boxes you can have. 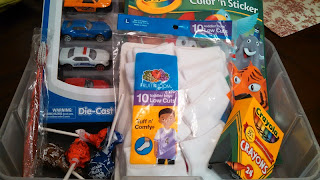 Boys box includes:  Suckers (because what kid doesn't like suckers!), coloring book, crayons, socks, toothbrush, match box type cars.  They suggest starting off each box with a toy and adding other goodies-my toy was a set of cars.  There is enough of them that they can share with friends if they wanted to. 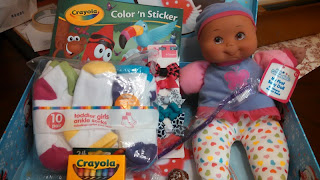 Girls box includes:  Suckers, coloring book, crayons, socks, tooth brush, hair bows, and a doll.  A note on the doll:  This is weird, but I didn't know what color of a doll to add. That sounded awful, let me explain.  When I was in Africa, a little girl started to cry because us white Americans came in and she hadn't ever seen a white person.  I know that the children will be appreciative of any doll they get, but I wanted them to have one that looks like them, so I chose a brown doll.  The pictures on the website all had darker skinned children.  I am REALLY hoping that this doesn't make me sound bad. LOL.

Want to donate yourself?  These are the places that I am sending my stuff to, but perhaps you have another place you like instead!

Just donate something!  Make it a yearly tradition, even if you don’t have much to give.  I know I personally don't have too much to give, but every little bit helps.  Honestly, it’s not your money, it’s God’s money.  You are just doing work for him through it.  Think about this story: 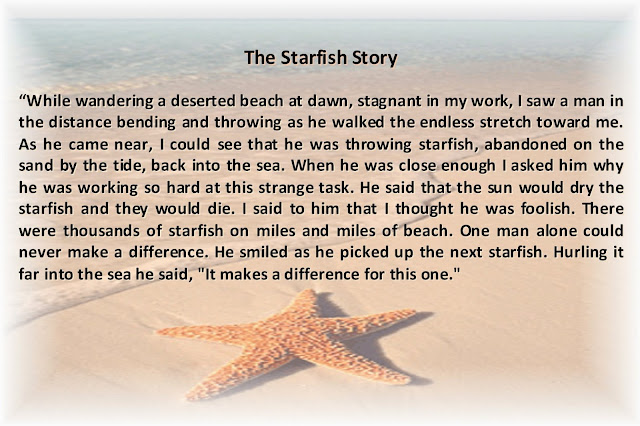 My friend (I'm not sure if she wants me to use her name) tells a story about how when she was little her mom was struggling and could not afford Christmas.  She got a Smurf doll donated and was so appreciative about it.  She still tells that story about how she wouldn't have gotten a Christmas, but one person donated something that gave her mom hope.  So sweet!
Posted by Stephanie at Wednesday, November 12, 2014 No comments: