The Secret, A Treasure Hunt

So, I’m obsessed with a treasure hunt!  In 1982 Byron Preiss published a booked called, The Secret.  No, not the Secret where you wish for a million dollars and it comes true, it’s a treasure hunting book.  He buried 12 cache’s in 12 different major cities throughout North America in 1981. Inside the cache is one ceramic key that can be turned in for a real jewel that is/was in a safety deposit box in NYC.  One was found in Chicago in 1983 and the other was found in Cleveland in 2004. Unfortunately, Byron Preiss died in 2005 and didn’t tell anyone where the jewels were.  He used to respond to treasure seekers with clues or to tell them they are on the right track, but now he’s gone and there isn’t anyone to do that.

To date, only 2 of the 12 have been found.  Some people say that you can only find the cache and not receive the jewels and others have said that his widow said you can still receive the jewels.  I guess we won’t know until someone finds the next cache!

Guess where one of the 12 is hidden?!?!?!  That’s right, Houston, TX!!!  There is one  picture and one verse that goes with each treasure.  You can’t use a metal detector because the key the cache is a ceramic box inside a plexi-glass box.  You might be able to use a ground penetrating radar, but even that may not be possible.

This is the picture that is associated with Houston.  Well, they think this is it because it has all the clues of Houston.  The book just gives you 12 verses and 12 pictures but doesn’t tell you which goes to which.  A few of the images/verse combos are controversial and they don’t know which city they are for sure in.  Most of the pictures have latitude/longitude coordinates, but a few don’t. 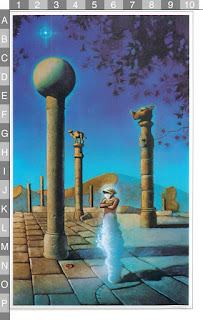 I have used this forum and this Wiki to help point towards clues!!  The people that post are really good and most have been working on the puzzle for years.  Good luck to whoever goes looking for it!  I am also interested in the New Orleans one since that is within a short driving distance too.
Posted by Stephanie at Tuesday, June 06, 2017