How I Started Running

With my marathon coming up in a few days, I thought it would be fun to tell the story of how I started running.  People that haven't seen me in awhile, or even if they have never met me are always amazed to hear how I started to run.  I don't look like a 'typical' runner, but that's the great thing about running, everyone is welcome!  Big or small, athletic or not, just get out some athletic shoes and start running!  If you are running regularly or long distances, I suggested a few different running items (see them here), but otherwise just lace up some sneakers and go! 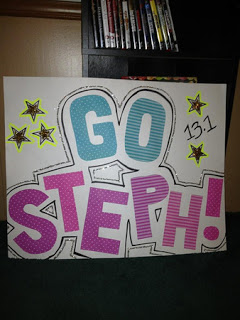 How I Started Running
Back in January of 2011 my friend Krista ran the Aramco Houston Half Marathon for the first time and I went to cheer her on.  It was raining and freezing that year while we cheered for her, but I loved it!  I got so inspired seeing all of the runners of all shapes and sizes running with smiles on their faces.  We called out their names as they ran past (as many as we could that is, there are over 25,000 people who run both races) when we saw their name on the bib.  I remember when Krista was training for the races, our friend Clarissa was in town and we wanted to have dinner.  Krista was so determined to train for this race that she didn't come with us no matter how much we bribed her with margaritas and fun!  Looking back on it I would say that is determination! :) 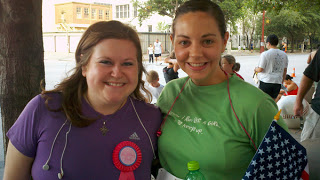 In the back of my mind a dream was planted that I wanted to run a half marathon (the crazy idea of a full marathon came later) but I really didn't work on completing that dream for a few months.  Then, in March for some reason I decided I wanted to run a 5K without stopping.  Crazy long distance at the time, but I was determined to finish it.  I had my first running goal and it was really scary to me.  I mean, 3 miles?  That's crazy talk! ;)  Little did I know that just a year and a half after I did that first 5K I would be running a 26.2 mile race. 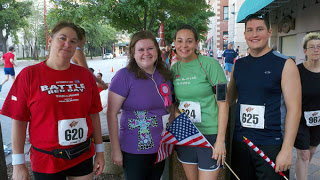 I am a firm believer that if you have a goal you need to take baby steps to complete it and pick a deadline for that goal.  I am the type of person who needs to have a dealine before I finish something, if I have a 'someday' goal it will never happen.  So I was talking to this friend at work and he said that there is a 5K usually at the end of May that the Astros put on each year called the Race for the Pennant.  I knew that I wanted to do a 5K around the time of my birthday so I picked a May race.  At the time I had no idea that 5K's happen basically every weekend and that there are running website (like this one or this one) dedicated to local races.

So, now that I had a race in mind (and registered for it) it was time to start seriously training for it and also recruit friends to do it with me.

How I Started To Train For My First 5K
There are programs like Couch to 5K out there but I am not a very good plan follower (besides long runs) so I sort of made up my own thing.  There was a park by my old apartment in Pearland called Stevenson Park that is a 1/2 mile around.  My neighbor Carol and I would walk around 3 or 4 miles a few times a week there, but one day I said to myself that I was going to run the entire 1/2 mile without stopping 'no matter what'.  I ran that entire 1/2 mile without stopping (although it was a slow process) and walked the other 2.5 miles that night.  I did that for the rest of the week (probably about 3 times total) and then the next week I walked run lap, ran one lap, walk one lap, ran one lap, and then walked the rest.  I would do that for about a week and then the next week I would increase it by one lap running without stopping 'no matter what'.  Until I was up to where I had to (2 miles) I would give myself one lap of walking in between.  Does that make sense?  Eventually I made my way up to 3 miles of running without stopping.  I remember the day I posted that I had run 3 miles without stopping on FB and I was soooo proud of myself. 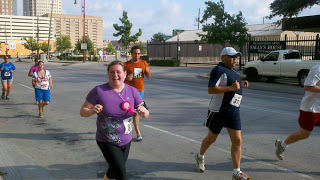 On my 29th birthday (which was a far cry from how I spent my 28th birthday drinking margaritas and having mexican food) I ran my first 5K.  I even had a special cross shirt made and wore my cross necklace so God would give me strength.  I ran the entire way without stopping, even though I did not take into account that there would be hills/bridges on the course.  I was very proud of myself! 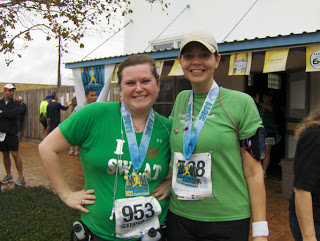 How I Started To Train For My First Half Marathon
In June of 2011 I decided that my dream of completing my own half marathon should come next.  I mean, if I did a 5K what is to stop me from doing a half marathon? :)  I knew that I would have to have a deadline set again so I added "Complete a Half Marathon" to my 30 Under 30 List.  Since Krista was my inspiration for this crazy idea in the first place, I enlisted her to run it with me.  I honestly choose the La Porte by the Bay Half Marathon because it was in December, which gave me plenty of time to train for it and I would also have 6 more months to 'try again' if my first attempt didn't go so well and I didn't finish.  That didn't happen though and I completed my first marathon in December of 2011.

When training for such a long race I knew that I needed a training plan for this one.  As a recommendation from Krista, I used the Hal Higdon Half Marathon training plan.  I trained my heart out for that race, even missing or coming late to several family/friend events so I could train.  I wanted to do good at this whole running thing and I was determined to do so.  I also did several long runs for that race to prepare all the way up to 10 miles before the race. How I Started To Train For My First Marathon
My first marathon training has been tricky.  From my first half marathon until I got picked for the full marathon in June I basically did nothing!  I ran a few times here and there, but otherwise I did nothing.  When I got picked however, I knew I needed to step it up and I joined a running program called Gotta Run of Katy.  I signed up (and completed!) for races that were 10K and above and also a triathlon (See the recaps here for Triathlon, 10K, 10K, 15K, Half Marathon, Half Marathon, 30K, Half Marathon).  I decided that I didn't want to do anymore 5K's (unless they were free) because my distances needed to be longer than 3 miles to effectively train for this race. 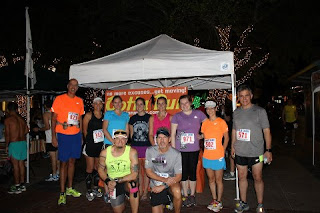 Now it is almost here and I am really freaking out.  Can I do this?  Absolutely!  It's all mental and I know that God will help me through it.

That is my story of how I started to run.  I will also mention that I was 40 lbs heavier then than I am now and the weight has come off mainly due to running and a healthy diet.  ANYONE can do this, the question is, are YOU ready to change and start your own journey?
Posted by Stephanie at Saturday, January 05, 2013