On Saturday morning at got up at the crack of dawn early to run a 9 mile race at Sam Houston Race Park, the Monster Mash 15K.  There is actually a 5K, a 10K, and a 15K all at the same time, and also later there is a short kids Candy Corn Race a bit later.  The race was organized by Onurmark Productions, who were the same people who also put on the Bridgeland Triathlon that I did in August.  I gave Onurmark much better ratings on this event because they seemed much more prepared for the crowds.

I woke up at 5 am to make sure I was on time and also so I could eat a small breakfast before I left. I of course also had to stop at Starbucks to get a Pumpkin Spice Latte if I was going to make it anywhere that early in the morning after being out late the night before. 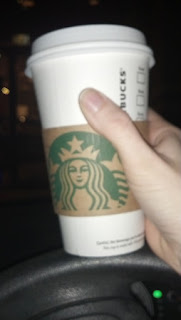 The race started at 7:30 am so I knew I needed to be at the race park early, but once I got there I didn't want to get out of my car.  It was so cold!  I eventually got out of my car and made my way inside to the waiting area.  Thank goodness we were able to go inside and wait before the start!

They called us to the start line, sang the national anthem, and we were off!  The course started off on the horse race track for a 1.5 (ish) mile loop in the sand, then we went in the street for two loops.  I really liked how we got to go on the same track as the horses, but I hate running in sand!  Oh well, it was fun. 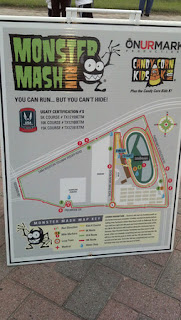 I actually felt really good the entire race, each time I passed the  finish line area I wanted to turn in, but I knew that this training run would help boost my confidence to be able to run my marathon in January.  At mile 7 I decided I wanted to go faster so I picked the next person in front of me to pass and picked up my pace until I did.  They call them 'roadkills' in running, but that sounds gross so I won't call it that.  I picked off at least 7 people for sure, but I was having a hard time running at this point since I was going so fast (for me) that I really wasn't paying attention. I just picked the next person, past them, and then picked the next one.

I was going a lot faster than my comfort zone, but I pushed through.  I kept grunting and I am sure the volunteers at the last two rest stops thought I looked crazy, but I didn't care. LOL.  I turned the final turn back into the stadium area and had the longest run to the end ever!  It was like it would never freakin' end.  I grabbed my medal and some water and headed inside.

Afterwards I headed to the food area and grabbed a ton of goodies.  I only ate the kolache (potato and egg), carrots, tomatoes, and drank the gatorade there though.  I saved the rest and will eat it this week (minus the chips, I am not a big chip person). 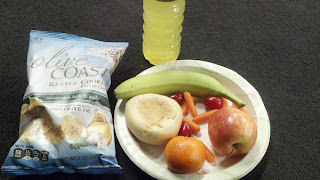 Wanna see some cool race bling?!  It's a GLOW IN THE DARK ZOMBIE MEDAL!!!!!!! I love it so much, ever since I had seen it on their FB page I couldn't wait for this race.  I actually went to bed last night and came back out a few minutes later because I forgot something and all the sudden I see something glowing on my wall (it sort of freaked me out), and then I realized it was my medal. haha.  The t-shirts were also glow in the dark tech t-shirts also. 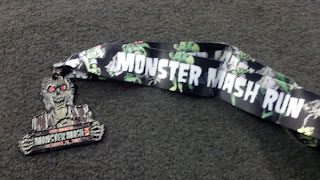 I had so much fun at this race!  It was a great race to do as a mini-long run for my marathon training.  Hopefully next year some of my friends will want to run it with me.
Posted by Stephanie at Monday, October 29, 2012