Today I did race #2 of the Texas Bridge Series, the Toughest 10K Galveston.  The Texas Bridge Series is a three part race series where you can do 1, 2, or 3 races and get medals at each.  The medals this year have been great so far!  I heart nice race bling with glitter! 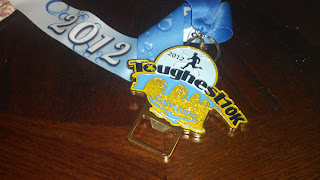 Since I live on the West side of Houston now it takes me a lot longer to get to Galveston so I had to wake up super early (4:15 am) to be there on time.  Two of my other friends were going also so we carpooled together to the race.  We all had planned on meeting at 5:15 am, but we ended up leaving at 5:30 am and headed that direction.  The traffic was not bad at all until we got to the exit and then we sat in line for a good 30 minutes.  The race director had warned everyone in the parking situation would be difficult and for everyone to get there early so they can start the race on time.  We finally parked and had just enough time to use the restroom then head to the starting line for the prayer, a moment of silence, and then the National Anthem.  The announcer said that there were about 1,600 racers participating that day!!  My Uncle Roger and Aunt Laura also did the race with us, but I didn't see them before the race. 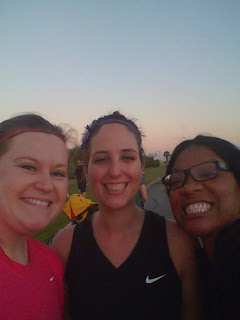 The course was a simple course that went through a small part of a neighborhood then over the Galveston Causeway to the other side, then a short loop and back over to the finish line.  The first mile or two or so I was doing about a 10:30ish minute mile (fast for me!) according to my watch and a few times I saw that it was about 9:07 (WTH?!!!!!).  <----I didn't stay at the pace for long though, LOL.  Once I got to the bridge my pace slowed down to about 11:30-12:30 minute miles while I was ascending the hill.  Once we were on the downhill I booked it to make up time. Kennisha was ahead of me somewhere, Aly was just behind me but I did not see them on the turn around.  I was ascending the bridge heading back over when I saw Roger, and then a bit later I saw Laura.  I took some sports beans and water at around mile 3 and headed back over to the other side of the bridge (why did Stephanie cross the road bridge?  To finish the race! hahaha).

The entire time I was looking at my  new GPS watch (I will post an update about that) to try and figure out what time I would be finishing.  I was getting discouraged until about mile 4.5 when I realized I could finish with at least a 5 minute PR if I hurried up and went faster.  Somewhere between mile 4.5 and 5 I passed Kennisha and she ran up besides me and was like 'when did you pass me?' I wasn't exactly sure but I managed to say that I was on pace to get a 5 minute-ish PR if I ran fast enough (I was going pretty fast because I could barely talk).  I didn't stop at the last water station (I had my water belt so it was ok) because I didn't want to mess up my time.  I rounded the corner to where  I thought the finish line was, but apparently it was further.  According to my GPS watch I had already gone over 6.2 miles so the course ran a bit long (not sure what my time was exactly at 6.2 miles, but it would have been over a 5 minute PR). 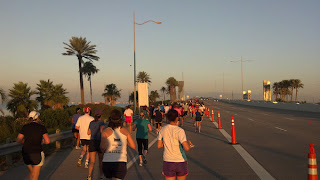 As I was crossing the finish line and one of my water bottles came loose and fell on the course (it did that on the bridge also), once I crossed I wanted to go back over and get it, but I was afraid that it would mess up my timing chip so I walked around and picked it up.  Kennisha finished about 40 seconds behind me (a PR!), and Aly was about 10 minutes after us (another PR!). 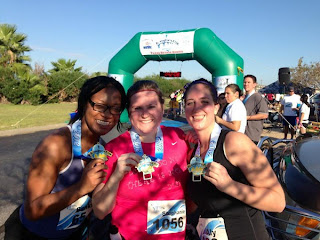 After we cross the finish line, got our medal, and removed our timing chip, we got into the food line and grabbed pizza, oreos, Rita's Water Ice (I had the Red Velvet flavor and it was awesome!), half a banana, and two mini cookies.  They had water, beer, and Muscle Milk to drink but I only had the water.  We headed to the sidelines of the finish line to cheer on Roger and Laura.  Roger finished first, then Laura came later (another PR!).  Once they all finished we took a few pictures and headed back to our cars. 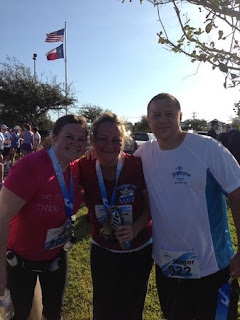 Aly, Kennisha and I went to the Strand area of Galveston and shopped at a craft show they had where I got the cutest new cross for my cross wall.  I need to make a post about my cross wall <--coming soon I guess!  Then we stopped in Friendswood to my favorite mexican restaurant on that side of town called Madres.  I had a stuffed avocado and tortilla soup.  Yummy!    Afterwards we headed back to our side of Houston so I could make it to my self defense class on time.