Note:  My phone broke early Sunday morning so I only have the picture of my medal for this post, which makes me sad!  Boo!
On Sunday I completed my first triathlon…and probably my last! Haha.  The Bridgeland Triathlon had around 1,700 people were competing in the race and it was interesting to say the least.  It is really hard training for three sports at once, and on top of that you have to increase your distance for a marathon. Marathon training had really taken over my training (and life!) and I felt that it was more important as a long term goal to practice for it instead of a triathlon.
I laid my stuff out the night before so I could leave first thing in the morning and also so I would not forget anything.  I woke up around 4 am (Jabba was excited to eat an hour early) and made my oatmeal while I was getting dressed and set it next to my stuff so I could eat it while on the road.  After a bit of a struggle I put my bike in the trunk/backseat of my car (side note: taking off a wheel from a bike is a pain in the booty!) along with my bag and oatmeal.  The drive was about 40 minutes and I got to the race site at about 5:45 am.  I wasn’t sure what the parking would be like and since this was my first triathlon I didn’t want to be late.  After having some help putting my wheel back on my bike I walked the transition area to get body marked and put my stuff in my area.  I also went over to the bike repair station and they helped me tune up my bike.  I met some great ladies that I racked my bike near and we walked over to the swim start together. 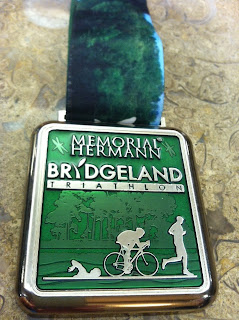 Swim-550 meters (19:32.9)
We were set to start at 7:33 am, but we didn’t end up going until at least 7:50 am.  I am not a very fast swimmer, but I finished!  I got kicked in the head many times, but I also kicked people accidently myself.  I only mildly freaked out in the water once and held onto a lifeguards kayak.  I floated on my back multiple times and just backstroked it out.  I only got to practice twice in a lake (once at 288 lake and once at the Bridgeland lake during the clinic) and I hated my gym pool (it was always dirty) so I didn’t practice swimming very much.  I exited the water and looked for my Mom, but I didn’t see her.
Transition (3:25.9)
I ran down the chute dripping wet and clothes clinging to me.  I finally found my bike and wrapped a towel around me while I put my socks, shoes, and helmet on.  I don’t have bike shoes, so I just put my running shoes on and got my bike off the rack.
Bike-13 miles (51:01)
I exited transition and hopped on my bike at the orange line and was on the road!  I turned on Fry Road and saw my Mom and yelled hi, she said they were leaving since it was so hot.  I am glad I got to see her at least.  I started pedaling down the road, and pedaled, and pedaled, and pedaled.  My A.D.D. was really losing interest fast in this entire bike thing so I found other ways to entertain myself until I got done.  Boy, biking was boring!  I won’t do a MS-150 because I can only imagine how bored I would get. LOL . Props to everyone who does that all the time. I also only practiced biking a total of 3 times, once was a 4 mile ride, the next was 13 miles, and then a one miler once I got the new bike I borrowed.  Sad, but true.
Okay, I am known for saying some t.m.i. stuff on my blog so here it is!  My ‘lady bits’ were hurting so much from that stupid bike.  I kept having to stand up and pedal because it hurt!  I am still sore even though I had one of those special bike seat covers.  Biking is not comfortable!

Transition (2:20.3)
I hopped off the bike after 13 miles and my legs felt like lead.  I had heard that they were supposed to feel like bricks, and did they ever!  I could barely walk it was so weird. All I had to do in transition was put the bike and helmet up and I was ready to go.  I also drank a bit from my water bottle because I didn’t have one on the bike itself.  To help my legs adjust I walked out of transition to the run to give my legs some time to adjust.
Run-3 miles (41:37.4)
I brought my water belt with me on the run, but with my clothes still wet it kept slipping off of my and got more and more annoying!  I almost ditched it at the one mile mark, but thought that wouldn’t be good (or polite! Don’t mess with Texas y’all) so I just dealt with it.  By this time I was so stinkin’ tired that all I wanted to do was walk the entire time.  I decided to do a walk/run strategy though so I could still finish within a decent time frame (decent on my standards).  I ran into one of my friends that I had met at the clinic the week before and I stayed with her the rest of the time.  They were handing out sponges at one water stop that I put down my shirt to cool off-it was HOT by this time of day.  The water stops had water, Gatorade, and ice at them and some people from the neighborhood had water soakers or water hoses for us to run through.  The cold water felt SO good!
About a half a mile from the finish line we were told that we were almost there by one of the families in the neighborhood.  My friend that I was running with said, well of course we were going ot finish since it was longer to turn around! Haha.  (I just thought that was really funny..was I delirious or did you think that was funny too?)
We saw the finish line up ahead and I sprinted to it!  I was sooooooo glad to be done.  Overall my time was 1:57.57. 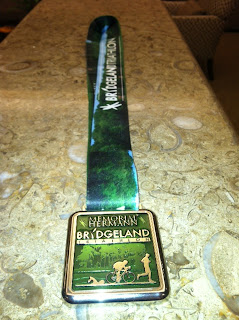 Finish line and after race celebration
They ran out of water at the finish line and in the food line.   I understand it is hard to predict food levels that athletes will eat but it's still no fun to have no water at the end.   For such a big race they need to calculate the numbers correctly or at least save some supplies for the slower people.  The women’s waves all go last so of course we are shut out of water/food after finishing after all of the men.  (edit:  I did fill out the race survey and the race director emailed me directly about the lack of water at the end.  He was very professional and explained the situation.  He listened to my concerns and worked with me to find a solution for their next race.  I think that is very professional on his part).

The next day
After I got home I took a shower and went straight to bed and slept for 3 hours.  I got up on Monday morning to go to work , but by the time I got there I was feeling even worse than Sunday.  I went home about 11:30 am to rest for the day and drink lots of liquids.  I was dehydrated and it was not fun.

Will I do another triathlon?  Probably not, I have had my fill of them.  I loved the bling I got though, it was super nice!
Posted by Stephanie at Tuesday, August 07, 2012