The Santa Hustle Half Marathon in Galveston was the last race that I had scheduled in 2012 and also the last race before the Chevron Houston Marathon on January 13th.  Yikes, it's coming up really quickly!

Packet Pickup-The packet pickup was held at the Tremont Hotel near the Strand.  Honestly, the packet pickup was a pain in the rear!  I live about an hour and a half away from Galveston and they were only offering packet pickup on Saturday. At the time of registration I could have paid an extra $15 for it to be mailed to me but some people on FB did not get their packets on time.  I decided to just stay at my grandparents house the night before so I wouldn't have to waste gas on going down there twice.

At packet pickup we each got a shirt that we are supposed to wear during the race.  Mine is sort of big on me, but I want to be part of the fun Santa group wearing their shirts in all of the pictures! 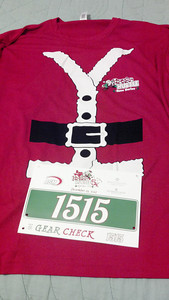 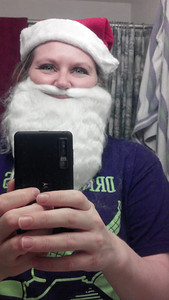 I woke up around 6 am so I could make sure to eat breakfast and drive to Galveston. Maw Maw made me yummy pancakes and I cut up a banana on the side.  I probably shouldn't have eaten such a heavy meal before a race, but I figured I needed some carbs and I had three hours for it to digest before I ran. 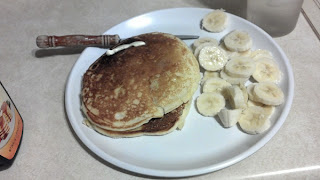 I left my grandparents house about 7 am and drove straight to Galveston. I had an easy time finding parking and getting to the start line.  There were a few blowup characters in the square and I took a picture with Santa and Frosty! 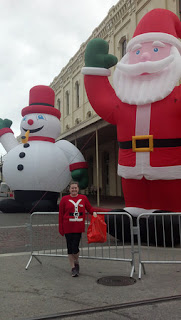 The race started promptly at 9 am and we ran the route on Galveston Island.  The race was basically two out and backs down the seawall and 23rd Street.  There was a cookie station at mile 2 (ish) and one at mile 6 (and technically mile 11 since it was an out and back).  There were tons of cookies and M&M's when I went by both times so I don't think the half marathoners took too many, it's hard to eat cookies when you are running 13.1 miles.  It was a flat course and I didn't have any problems really.  At mile 9ish I started getting antsy for the finish.  I wanted to finish with a new PR of 2:20:XX but the slower I was going the more that number slipped away.  The first 6 miles were great, I was rocking a great pace of around 10 MM, but I lost steam by the end.  Luckily, someone I met earlier on the course caught up with me and helped coach me to the end at a very uncomfortable pace for me so I could get a good time.  I kept glancing at my watch to see how much longer we had and she said don't look at the watch so I let her hold it so I wouldn't see the pace and we could go faster.  I don't know how to upload my stats to my computer, but I think we were going way fast for me. :)  Looking back, I love it, but at the time if you were anywhere near me you heard some very choice words coming from me every few feet. haha.

Finally, we made it back to the square and we just had to go around the corner one more time.  I told my new friend that I wanted to sprint to the end so when we rounded the corner I took off.  I think I was faster than she thought because she yelped in surprised! LOL.  I am a relatively faster sprinter compared to my running pace. 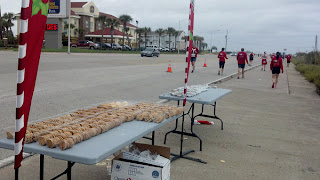 I finished at 2:25.10, a new 4:29 PR!  I thanked my friend for running with me at the end (and not letting me walk!) and then I got water and a banana.  There was some sort of granola bar and candy canes, but I wasn't in the mood for them.  I was disappointed that there wasn't any other food to choose from at the race, usually there is at least pizza or something. :/  Even the beer you had to pay for (I don't drink beer though).  The website said there would be a lot of food, but apparently bananas were all they had.  I guess you can't be too choosey when you got a great Groupon deal for a half marathon! 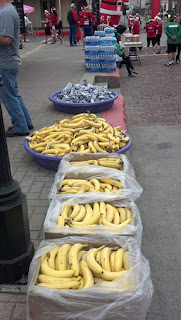 Success!  Last half marathon before my full!   Can't wait to add it to my medal rack. :) 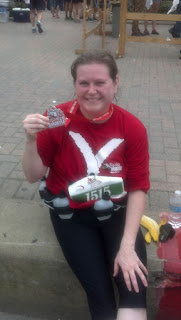 Merry Christmas everyone!
Posted by Stephanie at Monday, December 24, 2012