Battle of the Piney Woods

The Battle of the Piney Woods was this weekend and it was held at Reliant Park.  BotPW is a football game between  the best college ever, Stephen F. Austin State University and their rival Sam Houston State University.  SFA and SAM have been playing this huge rivalry since 1925 and I have attended 5 out of the last 8 BotPW's.  The game had a record number in attendance at 26,185!!

On Friday night I went to a party hosted at the Westin Hotel off of Gessner towards West Houston.  I saw a few people that I knew, networked for a little bit, and went shopping at the t-shirt table. :)  As I was driving out of the parking garage I saw this SUV and I had to take a pic.  Love it! 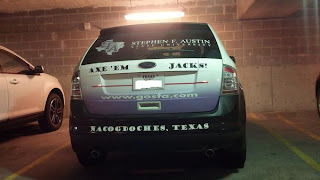 Some of you might know that SFA hasn't always had the best football team, but we have heart!  Some years are better than other years at football, this year is not one of those better years (so far) unfortunately.

I went to the drink/food area and got a drink.  I didn't see any margaritas so I had to settle for beer.
Beer Guy:  What kind of beer would you like?  Me:  I don't know, I don't like beer so you can choose.  I just need something to take the sting out of when SFA loses the game.  Beer Guy:  That's messed up.  Me:  I know, but I don't think SFA will win. 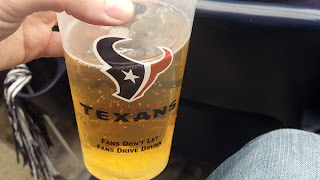 Best shirt ever! There were  some really funny SFA and SHSU shirts at the game that people were wearing.  There was one that they showed someone wearing on the jumbo screen that said "Lumberjacks take it up the Axe" haha.  I think that is really funny, you have to have a sense of humor.  My favorite shirt against SHSU is below.  Best shirt ever!  (for those of you that the jokes are lost on, SHSU is in Huntsville and Huntsville has a huge prison in the town.  Convicts=Orange.  Get it?)  (SFA's mascot is the Lumberjack, we 'raise' our Axe or say 'Axe 'em Jacks' or 'Kiss my Axe'  or 'Kick some Axe' hence the 'Take it up the Axe' shirt.) 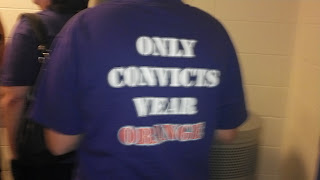 Driving Jacks members and Alumni were plentiful at the BotPW!!  There are a few missing, but this is a majority that we could find. 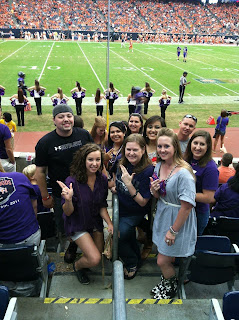 Every time the Lumberjacks would score a cannon would go off, the cheerleaders would carry flags across the field, and the Lumberjack mascots would do pushups until they counted the score of SFA's points.  (picture courtesy of Spencer Streetman!) 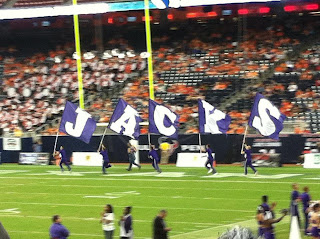 The SFA band at halftime performing.  I am not sure what all songs they played, but I know that My Girl was one of them!  Sam Houston's band performed also, but I wasn't paying much attention. Sorry. :/ 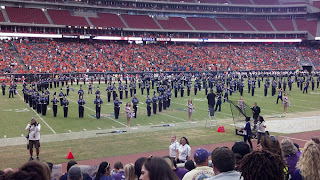 At the end of the third quarter we were behind by about 20 points.  We tried to catch up and came close at 41-52 when we had the ball, but the passes were incomplete at the 29 yard line and the SHSU Bearkats won the game. :(  If would have been able to make that pass we might have been able to tie the score up.  That's ok Lumberjacks!  #NextYear we will #KickSomeAxe 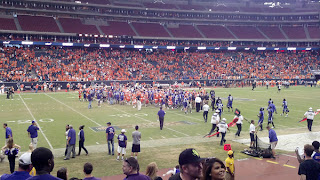 At the end of the game we all hold up our Axe and sing our school song. This pic is of the band and football team. 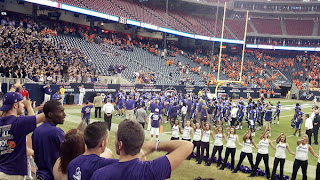 I loved the game even though we lost.  I got to see tons of my SFA friends that I haven't seen in awhile except for on FB.  Next year we will come back with a vengance Sam and beat some Bearkat bootie.

Email ThisBlogThis!Share to TwitterShare to FacebookShare to Pinterest
Labels: Driving Jacks, Fun things I can say I have done, Holidays and Special Events, SFASU