Today I set a new PDR with my 14 mile training run at George Bush Park!

I woke up at 4:45 so I could be on time for this run at 5:30 am. I met with my group and we headed out on the trail.  For the last two nights I haven't been able to sleep very well, and since this trail has no lights within one mile I was ready to fall asleep on the trail.  I didn't though and I kept pushing on. While I was in Honduras I didn't run at all since I forgot my running capris and my sports bra (Grr!) so going from no running to running the longest distance ever.  :/

The sun started coming up at at around mile 7 so I took a pic and turned around.  Throughout the run I had a package of Clif Shot Blocks and some pretzels to get me through this training run.  At mile 13.2 I got so excited because I realized that this was the longest distance I have ever ran (previously 13.1 miles at my half marathon), when I first started the run I knew that it would be the longest, but once I hit 13 everything after that was a PDR.  Next is 16 miles (next weekend), then 18 (December). 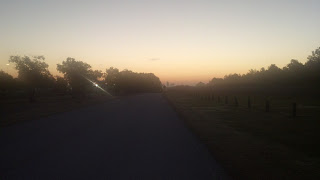 I will say that marathon training has been more difficult than I anticipated, but I am still going at it.  Every run I am getting closer and closer to my goal, one step at a time.
Posted by Stephanie at Saturday, October 06, 2012