Way to cold to be outside

Last night in the Woodlands Luke Bryan and Jason Aldean played a concert at the Cynthia Woods Mitchell Pavillion.  My friend Sallie won a set of tickets on the radio, but couldn't go to the concert so she gave them to me!  I wasn't sure who I wanted to invite, but then I thought it would be fun to ask my Mom to see if she wanted to go since I don't get to spend much time with her since I live so far away.

I left work at noon so I could run errands and not be in traffic at 5 pm on a Friday sitting on I-45N.  Sallie couldn't pick up the tickets until about 1:45 so I went to Memorial Park to run for a bit while I was waiting for her.  I had planned on running 6 miles (per my marathon training plan), but by the time I got there and changed clothes I only had time to do 3 miles.  Oh well, at least I ran something!  I knew that I would be getting home late and I wouldn't run then.

I met Sallie for the tickets and headed to Spring (with mild traffic) to my parents house to pick up my Mom.  We went to Chili's in the Woodlands for dinner and drinks.  Before going I told myself that I would not drink anything so I could be good for my race in the morning (Monster Mash 15K), but what did I do?  Had TWO drinks!  Sigh.  When will I learn? 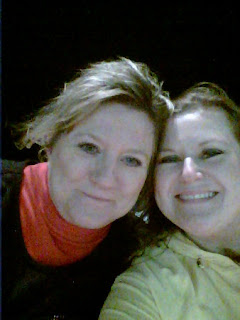 
We parked and started walking to the concert but it was FREEZING!  O. M. G. So. Flippin'. Cold.    There is a reason I do no live in cold places! We thought that if you won tickets on a radio show they would be good seats, but they were lawn seats.  That's ok, I don't mind lawn seats!  We got some lawn chairs and settled in for a long, chilly concert.  We went to the concession stand and there was hot chocolate!!!!!!!!!  With marshmallows!!!!!!!!!  I <3 marshmallows!!!!!!  It definitely warmed me up.

Some girl played first, then a DJ came on and played a random remix of songs, then finally Luke Bryan came out.  Let me tell ya, he is really funny!  He commented on it being so cold saying 'Houston, when did it become so cold, Lord!  My nipples are showing!'  haha.  Then later in his set he was playing the piano and started doing the Justin Bieber "Boyfriend" song. He didn't sing much of it thought thank goodness! :) I really think Luke Bryan puts on a great concert.

After Luke Bryan finished his set they started setting up for Jason Aldean.  I swear, it took about 25 minutes at least for them to set everything up.  Then, for a while they weren't doing anything on the stage at all, it was like he wasn't ready to perform or there was some sort of problem.  I don't know, but it took forever.  Jason Aldean came on and we listened to 2 songs, and then we left.  We wanted to beat the rush out and honestly, Jason Aldean does not sound very good live.  I had never heard him live, but my Mom said he sounded really slow and his voice was off.

We could hear him playing while walking to the parking lot and it didn't sound good.  I didn't realize that so many people tailgated right outside the gates by the pond.  Apparently it's a big deal to hang out right there and listen to the show because you could hear it perfectly.  Some couples seem to be making a date night out of it with wine and dinner. haha.  Cute!

We had a great time and I am glad I got to spend some time with my Mom.  Thanks Lyndsey and Sallie for giving us the tickets!!!!

Email ThisBlogThis!Share to TwitterShare to FacebookShare to Pinterest
Labels: Concerts