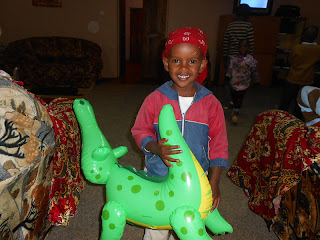 Jacob is one of the 42 children at Into Abba’s Arms I had the pleasure of getting to know during my trip to Kenya.  Jacob is a Somalian refugee that was born about 3 years ago.  His mother gave birth to him in the refugee camp and then fled the country, leaving him there.  Jacob cried on the streets for two days before someone called the cops.  His umbilical cord was still attached and he had just enough nutrients left in his umbilical cord to help him survive those 2 days in the streets.   The police took him to a local Nairobi orphanage to be looked after.

Into Abba’s Arms (IAA) happened to be at the orphanage soon after he arrived to pick up some new children.  They saw Jacob laying on a steel table through a window and asked about him.  The orphanage said that he was going to die so they should leave him there.  IAA said that they would take them, and they did.  Jacob was two lbs when they got him, and he looked like a skelton with skin.

Today, Jacob is thriving and runs the place. :)  Jacob is very smart, very active, and adorable! 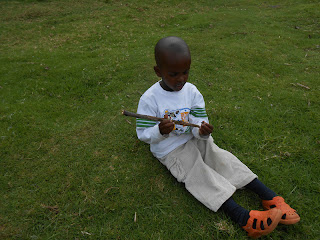 God has a plan for each of these children; otherwise they wouldn’t have survived to be able to tell their story.  I am thankful that I was able to meet Jacob and the other 41 children at IAA during my visit.  If Jacob’s surivival story is that huge, can you just imagine what God has in store for him?  God gives the greatest obstacles to those with the greatest potential.
Posted by Stephanie at Thursday, May 02, 2013