Friday was my next to last at Into Abba’s Arms.  The day was full of preparations for the King’s Feast that was to be held the next day.  About 300 kids from the community and other children’s home in the area come to IAA for the annual King’s Feast that is held in April of each year.  They have games, cake,  singing, dancing, and a big feast to celebrate.  Jane and Tarin brought a whole bunch of games with them from the US for the feast, but they also wanted to make more games.

I had thought about what games I wanted to make all week and Friday was the day to make them.   I started with hopscotch, then a ball toss with points, then a box maze.  We had a few boxes that we brought everything over from the US in, so we used them to make the box maze.  The kids loved it (more on that tomorrow).

For the hopscotch game I cut a tarp in half and used painters tape create the pattern.  We try to keep all of the games in one section of the yard, but unfortunately that part of the yard does not have concrete for hopscotch.  There were a few extra tarps lying around so I used them instead of chalk.  I figured chalk on the grass wouldn’t stay very long.  I had drawn a pattern on notebook paper the night before so I would have an idea of the shape I wanted.  The tarp was big enough for three hop scotches, and I had just enough painters tape to make three.  I made the squares 1 x 1, enough for big and small feet to all have fun playing it. 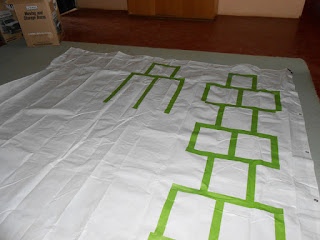 Next, I made a ball toss game with points above the cut outs.  I didn’t want the cut outs to be all the same size, so I cut out different shapes.  The smaller the shape, the more points it was worth because the ball was harder to toss through.I wanted the little kids and also the older kids to have success with this game, the triangle looks hard to throw a ball through! 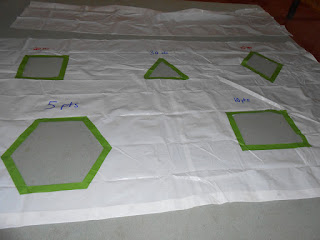 After the ball toss game I created a welcome sign out of left over tarp material.  It said Karibu King’s Feast (welcome to the King’s Feast) and had random swirlies on it.  I got Josh (from National Geographic and the documentary maker) to draw a crown on the top of the K for an added effect. 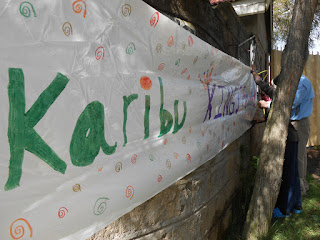 I was walking around the grounds when I saw Susan pretending to play with her baby.  In Kenya, the women carry the babies on their backs as they are walking/working so their hands are free, and Susan was holding her baby the same way.  It was so interesting the way kids pretend in different countries.  In the US, girls would have probably been pushing her in a stroller or something, not carrying her on her back.  I don’t know why I thought it was so interesting, but I did. 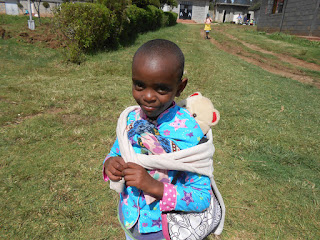 For dinner I made a soup (yes, I cooked!) and cut up some French bread.  It was one of the first times I had ever cooked for a group so I was pleasantly surprised when it came out well!  My Mom always makes that soup, so I was able to recreate it while there.  It’s my favorite soup!

After dinner we made 20 cakes for the King’s Feast.  A few kids were helping us mix the batter and pour it in the pans.  Of course, there expected pay was to lick the batter.  The next morning we iced all of the cakes and added sprinkles. 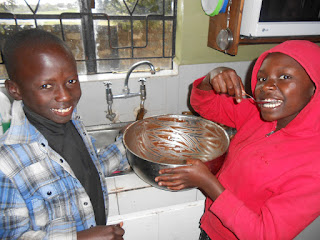 Stay tuned tomorrow to see the games being put to good use! :)