Saturday marked the last full day at Into Abba’s Arms and also the King’s Feast celebration.  I knew that the next day would be sad so I was determined to have a great day at the King’s Feast with the kids.  The day started with us icing the 20 cakes from the night before, and also adding the sprinkles!  Sprinkles just make life better, don’t you think? 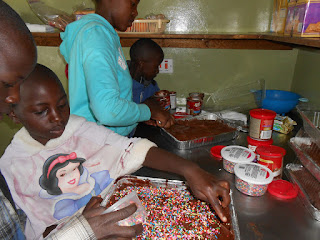 The King’s Feast is in honor of King Lane who generously donated money when he passed away to set up the children’s scholarship fund.  He always wanted the children to have meat to eat, so IAA slaughters to sheep and a goat for the kids to eat at the feast.  <-- I did not partake in the viewing or slaughtering of the poor, innocent animals!  The kids loved it though and were eating the meat right off the grill.  Hearts, eyeballs, intestines, everything was fair game.  YUCK! 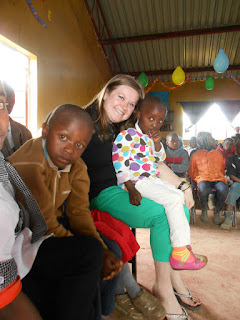 Everyone was scheduled to arrive around 10 or 11 am for the start of the King’s Feast.  The first part of the feast was in the church where they sang and danced.  Then Jane had confetti poppers released and they had a big song dance party.  View the video below.  That part was really fun!

The kids from IAA also sang a song (the older kids danced) that I thought was so cute. (for some reason, it won't let me show the video on here.  Click the link for the YouTube video)

After they were done dancing, we went outside for the kids to eat.  The menu was Kenyan food (obviously) of rice, cole slaw mixture, beans, potatoes, and meat.  I stayed away from the meat but I did try the rice and cole slaw.  I didn’t eat too much though luckily because that night I was really sick! My stomach was just not used to Kenyan food since I wasn’t used to eating it. The kids each got a huge helping of food and two pieces of meat.  This was a feast that they did not go hungry at!  They also go a soda to drink.  The kids only get soda a few times a year, so it was a treat. 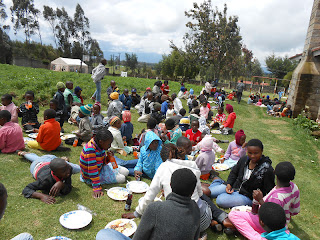 After lunch, we released the kids to play the different games.  They loved the box maze and they would stand in line over and over again.  Of course, Freddy and Jacob (the two youngest) would just walk up to the front of the line and go in again.  The other kids just shook their heads and said that they get to do whatever they want. LOL. 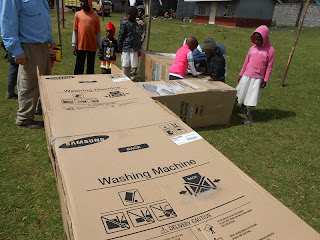 Hopscotch was a kid favorite once they figured out how to play. I demonstrated how to jump in the squares a few times before they got it. 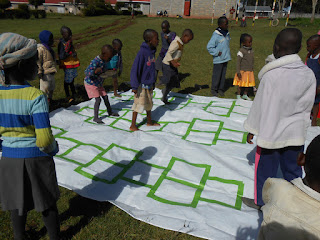 The ball throw for points game was also a success, although they didn’t seem to keep score. 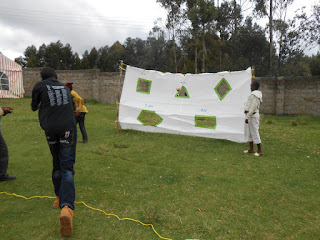 I also had found a bubble stick in the pile and had the best time watching the kids go and swat the bubbles away. 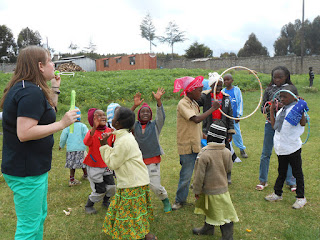 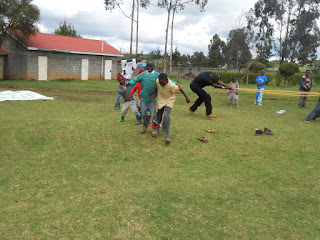 Parachutes were played with 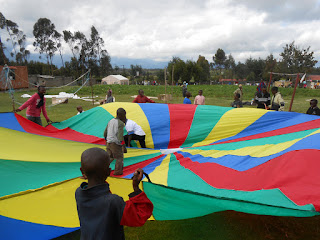 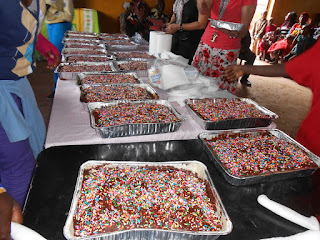 Everyone left around 5:30 pm and all was quiet.  Not!  It was still chaotic with the kids having all eaten sugar. Haha.  It was fun and that night we played with puzzles on my last night there. 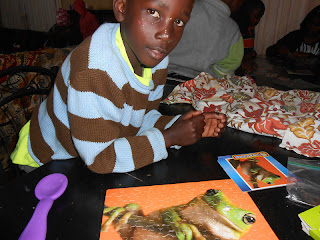