Wednesday was a shopping day!!!  I <3 shopping!  Our goal was to leave at 10 am, but we didn’t end up leaving until closer to 11.  They had warned me that Kenyan time moves veerrrry sllooowwwllly but I didn’t understand what they meant until this shopping trip to Navisha.

It literally took all day to go shopping for a few things.  At home, I would have been done with this trip in a few hours (plus travel time), but there was a lot of waiting around.  I am very time conscious, so I would have my lists and consolidate them as I shopped or choose stores that are closer together for my agenda.  We went with two of the staff and Jane who all had different items that needed to bought.  Jane is from America too so she was frustrated that it took all day also; we were all talking about Kenya time while we were waiting around for the other two.

First we went to the power company to ask why the electric bill kept being different rates (Jane went inside while we waited outside).  It took awhile because the power went out in the building (ironic?) and then the staff went to lunch.

We walked through the open market to see what it was like.  The open market is a bunch of vendors (maybe 100?) selling things ranging from shoes to beans.  We had dropped one of the IAA staff members off there to buy food for the week.  Jane said that she used to go with her to shop in the market, but the prices were too high when she went because she was a Munzungu (white person).  There are two prices in Kenya, Muzungu and Kenyan.  If you are a white person, the prices are always higher because they know you can pay more.

We went to the grocery store next (like a Wal-Mart) and shopped for some food items.  IAA needed 50 loaves of bread for the week and other random items.  While we were there we got lunch from the deli, I had a hamburger type pizza.  One of the kids was also having their birthday that week, so we got them a chocolate donut.  For their birthday each child gets a small flashlight and a chocolate donut that they can either share or they can eat themselves.  I also took time to buy some Kenyan tea (Kenya is famous for their tea) and some red plum jam to take home with me since I wasn’t sure if I would have another chance to go to a grocery store and buy it.

After the grocery store we went to Safaricom (internet and phone) and the hardware store (lightbulb).  We hung out in the van afterward waiting for the other staff members to get back.  Then once they were back, they had to go back in the store we were in earlier to buy something that we could have bought when we were in there!  It was like criss-crossing the town to buy what we needed.  Shopping has never been this exhausting!  Shopping in Kenya was not a highlight of my trip! LOL.  It was interesting to experience, but it was not for me. :) 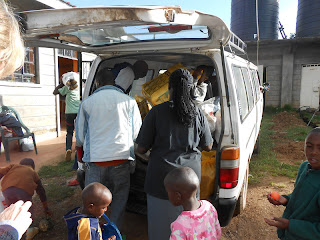 We got back to IAA around 5 pm unloaded the truck.  The kids were so eager to help us unload everything; kids in the US would run and hide so they wouldn’t have to help. 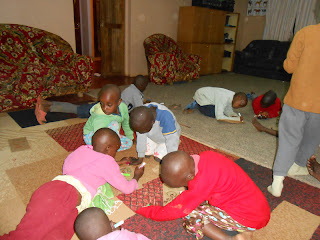 The power had gone off later in the evening so we had to use flashlights to get around (power goes off frequently in Kenya).  I found some brown paper lunch sacks in the storage room and also markers.  I brought them downstairs for the kids to make puppets with.  They loved puppets!  After they drew on the bags, they attacked me with them and we had puppet wars!  It started with the puppets ‘eating’ their nose or ear and then a full fledged attack happened.  It really came out of nowhere. 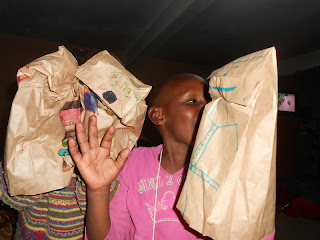 After the lights came back on, we played puzzles and games.  I tried to teach the older kids how do the border of the puzzle first, but they weren’t interested in my puzzle tricks.
Posted by Stephanie at Thursday, May 16, 2013