When I had gone to bed early on Thursday night, the plan was to sleep in, have breakfast, then leave for the site around 10 am.  However, the next morning Josh and Ali woke me up around 6:30 saying that our driver Phillip had heard on the radio that a pride of lions were stalking some zebras (I think it was zebras) and they could watch it be killed (or at least eaten).  After the day before with the cheetah dying and everything else I saw, I did not want to see anything else die.  Yes, it’s the circle of life, but I don’t want those images in my head forever.  I slept in. 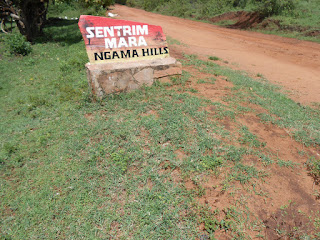 I had breakfast about 8:30 (bread, pancakes, eggs, watermelon, and mango juice) and hung out til everyone got back.  I packed up my bags and took a nap by the pool on a lawn chair while the cleaning crew cleaned my room. 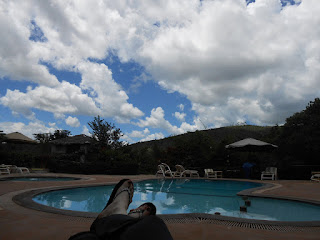 Around noon I decided that I wanted a beer (who am I?) so I asked what kinds they had.  You may or may not know that I am not a beer person…I am a margarita person (when I do drink).   I wasn’t sure which beer to try and I had only heard of one of them, which was Heineken.  Later in the day (at lunch) Josh had gotten a Kenyan beer called Tuskers and let me try some of it.  It was good, but I am still not a fan of beer! 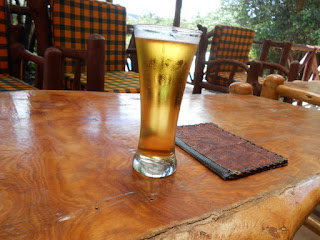 While I was relaxing I saw this pretty butterfly.  Butterflies are beautiful! 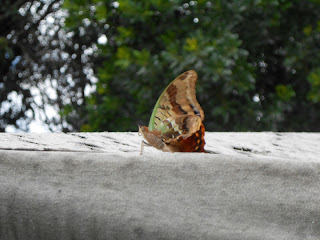 Around 12:30 I was about to eat lunch when Josh and Aly got done packing and joined me.  I had cream of spinach soup, rolls, rice, Indian dish with okra, vegetable salads, fresh fruit, and a bite or two of banana jello <--That was cool and I don’t even like banana flavored stuff!

Since I was already packed, I hung out with our server Stanley (Hey Stanley!) and he told me all about himself.  His resort name is Stanley because his Masai name is hard to pronounce (I didn’t catch it though).  He is part of a Masai tribe (different than the one we visited) and has one wife.  He technically picked his wife, but he had to beg his parents to let him marry her.  Normally, the parents choose your wife, but he met her at school and pleaded with his parents to let him marry her.  He stayed in her village for a month to ‘test things out’ and then his parents negotiated with her parents on the terms of the marriage.  Two months later they were married.  Now they have two children a girl and a boy.  He goes home to see them every few months, but he has to walk there, which takes about 2 days.  Sometimes the staff are able to catch a ride with drivers who are leaving the grounds.  We exchanged email addresses so we can stay in touch.  He was really sweet, I’m glad I got to meet him.

Server tips:  I know when I was googling the trip I couldn’t find much about tipping so I will tell you what I did.  They had told me it was customary to tip $1 per breakfast and $2 per dinner for your server, and $1 per day for the person who cleans your room.  Honestly though, they did such a great job that I tipped way over that.  In America you would never find that sort of service and just because the wages are lower does not mean it’s right to not tip like you would in America.  Yes, they expect to be given less, but if I would tip a server in the US for one meal what I would tip someone who has treated me very well the same amount for three full days, that isn’t right!  I was told I tipped him and my room person way too much, but I felt better about it.

Around 2 pm we left the park in a van loaded with all of our stuff, plus we took a staff member’s wife and baby and dropped them off.  The baby didn’t make a peep the entire way home!

When we made it to the gates of Masai Mara there were tons of people selling stuff on the side.  Phillip told us to close our windows and keep telling them no so we wouldn’t be pressured into buying anything.  On the way out we saw tons of baboons, zebra, buffalo, gazelle, etc. 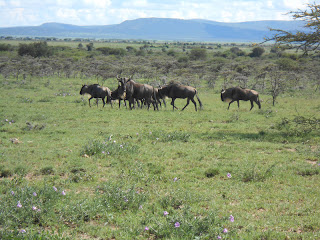 The drive from the safari to Into Abba’s Arms (IAA) was about 6 hours.  We stopped a few hours outside of the safari at a huge gift shop with really nice bathrooms.  They were selling tons of stuff, but it was all stuff that I had no interest (and no suitcase space) to buy.  They had beautiful carvings for chess games, but I have never played chess in my life so I wasn’t interested.  While they were shopping I went outside and saw the coolest tree with the prettiest yellow birds on it.  Apparently, the male birds make these nests and the females choose who they mate with based on how well their nests are constructed.  There were probably about 60 bird’s nests in this tree.  Really cool! 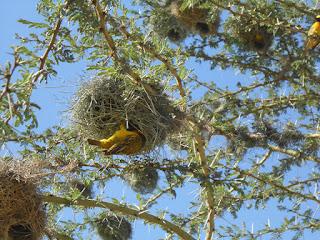 We passed through lots of towns on the way to IAA, and saw lots of people selling on the side of the road things like coal, cabbage, potatoes, carrots, and tomatoes.  We also saw several people who were trying to hitchhike for rides.  (No Mom, we did not pick anyone up…we were safe).  I also saw a BMW while there, which was rare.  I asked Phillip what the guy did for a living since he drove such a nice car; he said either a doctor or a preacher.  A preacher?  In America preachers aren’t paid very well, but in Kenya there are some very well paid preachers, especially mega church preachers. 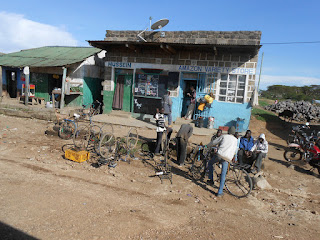 We made it to the site around 8 pm and some of the kids were asleep, but a lot of them were eager to meet us.  The kids helped me bring my suitcases upstairs and I choose a room. Upstairs in one of the main dormitories of IAA is where all of the mission teams sleep.  The guys on one side of the building, and the girls on the other side, each side has its own bathroom.  There were two rooms available and Aly choose one and I the other.  My room had three beds in it, a two queens and one twin.  The most comfortable bed was the twin size bed and I had brought new twin size sheets with me to leave behind (plus I have a queen at home so I couldn’t use it anyway) so I choose that one. 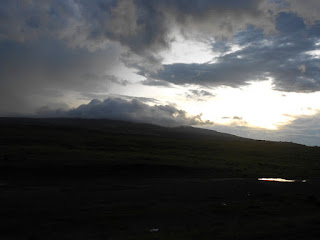 I fell asleep around 10 pm, very excited about the next day which was my first full day at IAA!
Posted by Stephanie at Wednesday, May 08, 2013