My second full day at IAA was a Sunday.  I woke up around 8:30 (having no alarm is nice!), showered and had breakfast.  I was rushing to get ready because I thought that church started at 9 am, but it didn’t start until 10 am. 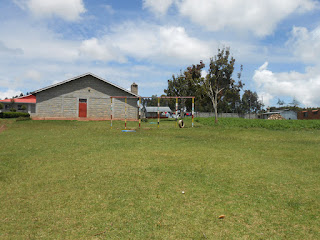 (back of the church)

Church was from 10 am to 1 pm…a lot of singing/dancing with a little bit of preaching.  Children from the community also were allowed to attend church with the kids from IAA.  Group of after group, solo after solo the kids sang and danced for hours.  I got the impression the kids were more dancing for the attention than praising God, but I turned that negative thought around in my head.  These kids don’t get much attention in their general lives (some of them at least), so if God is using the church as a platform for them to feel loved, then it doesn’t matter.  The kids will turn to him because they feel love. 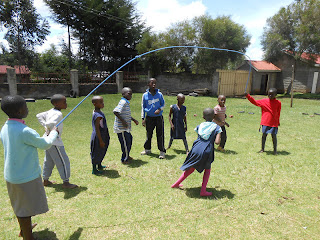 Most of the songs weren’t in English so I couldn’t understand them, but it was good to hear.  I walked into church and sat on a pew towards the back with two kids on it.  Within 10 minutes of me sitting down, the entire row was filled with kids trying to sit by me and touch me.  Some of the neighborhood kids hadn’t seen white people before (at least the younger ones) so they wanted to touch my skin, hair, and my nails.  When it was time for the singing and dancing to stop and the preaching to begin, I pulled out my tablet and opened my Bible.  The kids sitting next to me were so enthralled in my book, I don’t think they were listening to what was being said by the preacher!  The kids love anything technology based so my tablet was so cool to them; they had a blast flipping through the pages electronically.  Towards the end of the session they found some pictures on the tablet and loved ‘searching’ for me.  Every time we flipped to a new picture they loved pointing me out in them.  They couldn’t believe Jabba was an indoor cat! :)
After church all of the kids got cookies!  What a fun treat.

After we got done with church we went upstairs to decompress for a bit before lunch, but by the time we were done decompressing, lunch was over and there was no Kenyan food left!  I just made myself a PB&J sandwich, which was great!  Red plum jam had become a favorite of mine while in Kenya.  After lunch I did some paperwork for Jane and Tarin, and then played games with the kids the rest of the time.
I played Candy Land with the younger kids and they loved it.  Candy Land only has a 4 person option so all the kids had to take turns playing, which they weren’t too happy about.   The kids got bossy when it came to Candy Land! LOL. I kept having to scoot them back because they were all pushing each other onto the board and knocking the pieces out of the way.  Sharing games nicely is something I worked on a lot with the younger ones while I was there playing games.  The kids were great though and I will say that the kids were really good sports about winning or losing.  No one cried in victory or in sadness when they won or lost.

Dinner was a munzungu (white people) dinner that the staff made for us.  Dinner consisted of Chai Tea, Baked chicken, zuchinni, and noodles.

After dinner we played more games of Old Maid, matching, Blink, and puzzles. 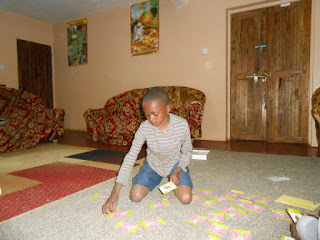 The next day was a Monday…would it be like the Mondays in America?  Catch ya next time to see. :)
Posted by Stephanie at Monday, May 13, 2013