On Saturday I traveled to the Woodlands to volunteer at the Ironman Texas 2013 finish line.  I originally wanted to be at the finish line when my friend Debra crossed, but she was injured about a month ago so she was not able to race this weekend.  I had so much fun volunteering that I might make it a yearly event…unless of course I decide to actually get off my booty and complete one myself! :) hahahaha. 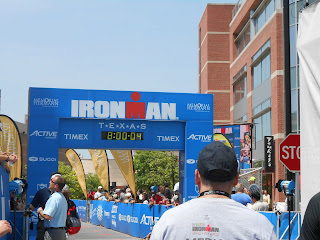 My shift was from 1:30-5:30 pm to catch the athletes when they cross the finish line.  I had the hardest time parking so I was afraid that I would be late to my shift, but I got there right on time.  We got a free shirt when we checked in, and then we just all sort of hung out for a bit.   They gave us instructions on what to do, then let us take a break for about 45 minutes.  We hadn’t done anything to take a break from, but I think there wasn’t much for us to do so we just sort of hung out and cheered for the runners as they passed.
At around 3 pm we all stood in line to start catching the athletes as they came in.  I was about 5 in line to catch someone, but there were 6 people that were designated to catch the top finishers out of the male and females.  Someone in the top 5 of each category would be drug tested for illegal substances, but the top 5 didn’t know which one would be picked.  So whatever the special catcher’s numbered athelete was, they would stand in line ahead of us to take them directly to get tested.   I’m sure the #1 person is always tested (both male and female) but I am not sure the other numbers that were tested.

The first finisher was a guy from Great Britain.  We kept getting updates that he was 3 miles away and 1 mile away, then he was rounding the finish shoot.  It was pretty cool seeing him cross.  I think they said it was the first time he has ever won an Ironman.  After he crossed he gave an interview and they asked him about his race and everyone was congratulating him. 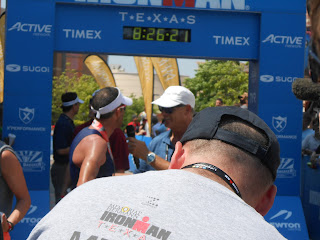 While I was waiting for my first ‘catch’ I saw the first woman come across the finish line.  Her name was Rachel and she was a rockstar!  She hardly looked like she had just completed an Ironman!  After she crossed she went back and hi fived the spectators down the finishers shoot.  She seemed really sweet.  Afterwards she came back to wait for the 2nd place female to cross and was just sitting there playing on her iphone like it was no big deal.  I would be asleep if that was me, not playing on my phone nonchantly…ROCKSTAR!! 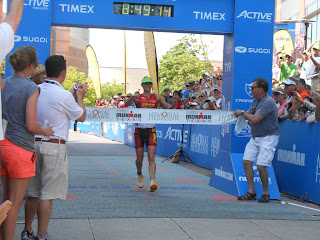 My first catch was a guy from Columbia named Andres who came in as the #9 male (I think that’s what his placement was), he was a professional athlete.  I walked him to get his shirt, gave him some water, made sure he was ok to walk and let him go.  He didn’t speak English very well I don’t think so I couldn’t talk to him as much as I did the others. 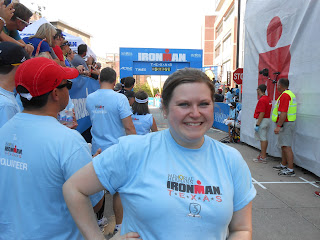 I caught 6 or 7 people total during my shift.  At the end of my shift my friend Cindy and her husband came to the finish line to see if they needed any extra help.  I ended up staying with them for an extra hour before heading back to my side of town.  I had so much fun volunteering and I can’t wait to do it again!
Posted by Stephanie at Thursday, May 23, 2013