Thursday was the day of the IDP camp visit.  They had told me that we were going to a refugee camp while we were there, but I didn’t really know what that meant until we got there.  The IDP camp is where a group of 5,000 people are forced to live on government land until they are given their own land.  12 years ago there was a tribal clash and the government seized the land.  They were nomads for awhile but would always get kicked out of the land they were on because they were ‘ruining’ it.  The government let them use the current land temporarily, but they cannot even build a garden on it.  They have been in the land for 12 years, and they don’t know when they will get the new land.  The government brings food about every 3 months, but it only lasts for about 2-3 weeks because they don’t bring enough for 5,000 people.  They rely on people like Jane and Tarin to bring them food when they visit and they get their drinking water from the side of a mountain. 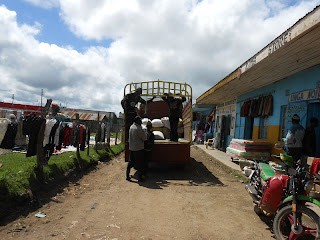 We left around 9;45 for the IDP camp and stopped in the town of Muzumo to get maize and beans to feed the people at the camp.  We got to the camp and were able to see it from the road because all the trees around it were being torn down for development.  A hotel is being built on the land right above the camp because the area is full of wild elephants. 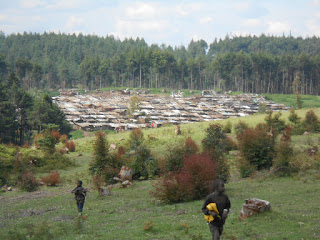 The road was closed due to construction and rain so we had to hike down to the camp.  On the way we saw a woman getting water out of the mountain, putting it in a barrel, and carrying it on her head.  It seemed like the women do all the work in the camp (that is my observation, but it might not be true). 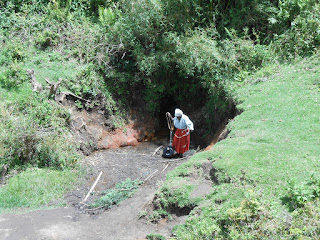 We met with the leader of the camp, Gaid.  He had an ‘office’ set up with an old umbrella and a makeshift wooden table that he sat at all the time.  He reminded me of the old teddy bear from Toy Story 3 that led them through the daycare (before the bear turned mean.  Gaid was nice the entire time). 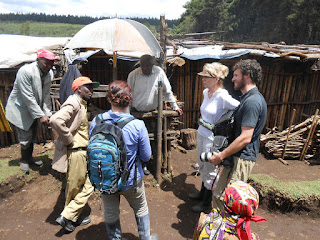 Gaid gave an interview for the documentary and everyone in the camp sat around and listened.  The children loved coming up to us and shaking our hand, but some of the younger children were scared of us because they had never seen white people (muzungu’s).  IAA also supports a woman at the camp that developed epilepsy as an adult.  She was married but when she developed epilepsy her husband left her and the children.  One day, as she was cooking, she had a seizure and fell into the fire burning her body very badly.  IAA has paid for her surgeries and sends her money monthly for support. She was a very sweet woman and loves God. :) 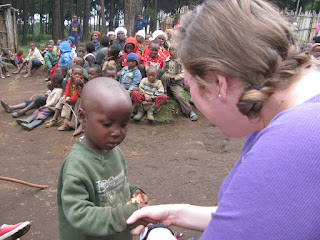 There are about 5,000 people living in the camp consisting of 502 families and 700 school age children.  They live in 13x13 huts made from sticks and tarps.  They are very organized in the camp because the huts are made sectioned off A, B, C, D, E, and F.  ABCD have an average of 120 huts and E,F have an average of 80 huts.  There are not indoor bathrooms in the huts, but there are several places throughout the camp where Chos are.  Chos are basically a hole in the ground that you use the restroom with.  When the holes are full, they just put dirt on it and move the chos to another location. 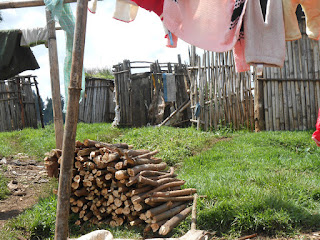 The tops of some of the buildings have tarps on them that were donated by people at Jane’s church.  Last summer there was a flood that killed several people and had the streets flooded as well.  Jane’s church donated 500 tarps so the rain wouldn’t leak into their homes and ruin everything.  She came back to notice that a lot of them weren’t being used because they were waiting for them to get their new homes, then they would use them.  I would think that if you were stuck somewhere for 12 years, I wouldn’t rely on the government too much waiting for a new place to stay. 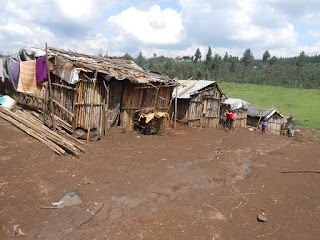 We walked down the camp to see how they lived.  They showed us the inside of their houses.  One side was a cooking area and the other side was a living area.  There were no windows in the house and it smelled really smoky in there because the fire is burning inside the house. 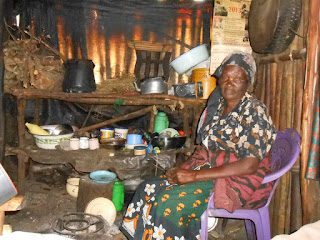 We were almost done with our tour when we found a pool hall within the camp.  We walked in and they asked us to play.  Jane and Josh both played some pool with them while we were there.  So funny! We walked back to the van to hand out the food and hats to the villagers.  Each family was allowed 6kg of maize (corn) and 2kg of beans.  The village secretary had a register that listed each family in it so there wouldn’t be mass chaos when they were getting the food. 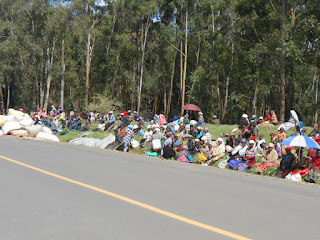 While there we also had 700 hats to hand out to the kids.  A girl from the US had raised enough money for IAA to have 700 hats made to donate to the children.  While the families were getting food the kids were lined up and were given hats.  We had enough for all of the children, but the kids are so deprived that they were sneaking their way back over to get multiple hats.  They tried to control the kids and move them to another area, but even the parents were helping the kids get more than one hat.  It was a madhouse!  After we thought each child go one, we finally had to put the rest of the hats in the van.  When we left the people were giving us dirty looks because we didn’t leave the rest of the hats with them. 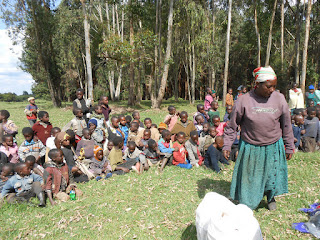 I was really upset that the kids were trying to take more than one and sneaking around us, but then someone mentioned survival of the fittest.  The kids are desperate for anything much less food and hats.  Of course they would want as much stuff as they can get.  Tarin told me a story about when she was there the last time putting a Women’s Conference on and handing out free Bibles that some of the women would get in line just to get a free Bible so that they could sell it later.  Tarin was upset about that but then she thought that God knew who would pick up that Bible after it had been sold several times over.  He had a plan for those Bibles and he has a plan for the extra hats that the kids took.  God knows what He is doing, we shouldn’t get caught up in the small details when He has them covered. 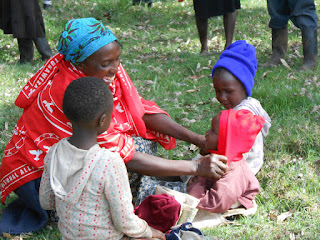