Day #4 in Kenya was a Saturday and also my first full day at Into Abba’s Arms (IAA).  Into Abba’s Arms is a children’s home in Kinagop, Kenya that serves 42 children ranging in ages from 2 years to 19 years.  They do get babies from time to time too (read Jacob’s story).  They have about 5 acres of property that they utilize very well.  They are in the process of buying land down the road that they plan on building a school on.  I am actually in the process of planning a 5K/10K fundraiser to raise money for the school.

I woke up around 8 am and took a shower.  IAA has solar panels on the roof to help with heating water.  There is also an instant hot water switch that you can flip and just use the cold water from the tap.  The first few days I did the instant (the switch) and the water was lukewarm, but then I tried the solar hot water and I was hooked.  So hot, just like home!  Breakfast was plain eggs and toast with red plum jam (best jam ever! I bought some for home).  The eggs, milk, and butter are not kept in the refrigerator, they are just left on the countertop.  I don’t know if it was because they were so fresh and without chemicals and additives or it was because of the non refrigeration, but the eggs had the brightest yolk I have even seen.

My first morning at IAA was spent sorting out all the donations we had brought with us.  There were four of us that brought large U-Haul boxes with us that had to be unpacked.  Some of the items were for the King’s Feast; others were clothes donations and misc toys.  I also tried my best to organize the storage room that someone does each time they are there.  I put each of the donated items in their place (like the toothbrushes from the Dabel’s) and hopefully made it look a bit more organized.

For meals we had the choice of trying the Kenyan food (like the kids) or eating “western” food (American food).  For the most part I stuck with western food.  Some of the things just wasn’t appealing and I am not sure my stomach could have handled it.  For lunch I had a ham and cheese sandwich.

After organizing the storage room, I took a break and went downstairs to hangout with the staff and some people from another children’s home, Flying Kites.  I sorted beans for the first time in my life, in Kenya the beans don’t come pre bagged with good vs bad beans.  It was a neat experience to go back to the old days before supermarkets did the hard work for you. ;) 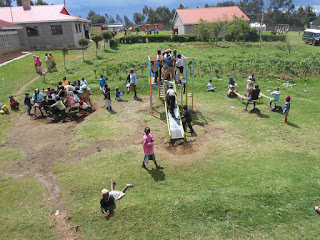 Flying Kites Children’s Home was at IAA for an abstinence training for the kids.  The kids were split up in younger and older children and taught the importance of abstaining from sex until marriage.  AIDS is very prevalent throughout Africa and so is teen pregnancy.  I heard that is stems from houses being so small and parents and children being so close together that kids hear and see sex all of the time.  If you parents were 5 feet away from you with no doors, you would probably see things that a lot of American kids wouldn’t see.
I played some games with the kids on the playground for awhile.  I started with trying to play Red Rover, but the kids didn’t quite understand it and I think there was somewhat of a language barrier.  The kids are learning English, but sometimes the connection just isn’t there and they don’t know what you are talking about.  Plus, the kids from the other children’s home don’t know English very well either.  After the failed game of Red Rover, we played a very intense game of Duck Duck Goose; which they loved! 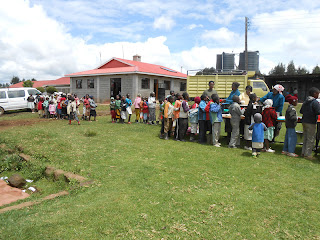 For dinner I tried some Kenyan food made from potatoes, kale, and corn.  The consistency was like a baked potato that was crumbled and the corn was really tough, like feed corn that we would give livestock here.  There was also chicken, but it didn’t look too appealing so I didn’t eat it.

Around 8:30 I did a craft with the older kids that I had brought with me.  It was those black scratch off ones with colors underneath that you can make pictures with.  The ones I brought with me were crosses and then there were also some with words like Praise, Jesus, etc.  The kids loved them, even the boys!  I made a few examples and one boy sitting next to me did the exact same design on his as I did, multiple times.  It was cute. ;) 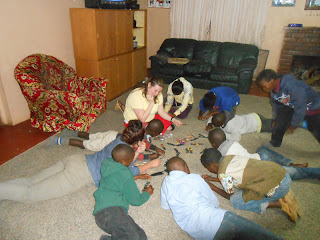 As we were doing our craft, some of the kids were putting different movies in the DVD player.  One of them said “watch this, it’s part movie, part song”  I was confused and didn’t know what to expect, but then it came on and it was a music video from the US.  In Kenya the music videos are just some guys singing on the side of the road with cars whizzing by, but in the US they are mega staged productions.  So I guess it is part movie, part song. Haha 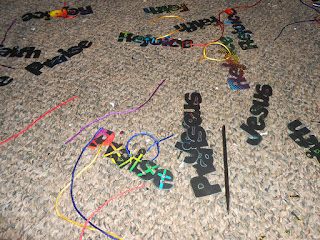