Jabba goes to the Vet

On Friday, after work, I took Jabba to the Vet for the first time since I got him almost two years ago.  When I got him at the animal shelter he had just gone to the Vet so they told me I didn't need to take him, but I figured since it had been almost two years he needed to go. Everyone kept telling me that I needed to take him since he is so 'fluffy' and that there might be something wrong with them (spoiler alert:  there isn't!).

Jabba does NOT like to travel at all, he gets really, really, really upset and cries and cries when I try to take him anywhere.  The entire car ride when we moved was one big meow fest.  It breaks my heart!  Anyway, this trip I made sure to talk with him about what to expect (crazy cat lady) and he went right into his cage and only cried once!  Progress!  (yes, that is a medium size dog crate because he is so fluffy). 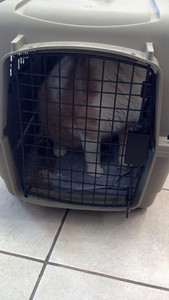 Jabba was so good and patient while waiting for the doctor to check him out. I was so proud of him!  He did investigate the table for a bit and all of the instruments, but otherwise he was very patient.  He did hear a few dogs in the waiting room and looked at me for support, but then he just sat back down and waited.  I am hoping that it didn't bring back bad memories from when he was at the shelter getting checked out. :/ 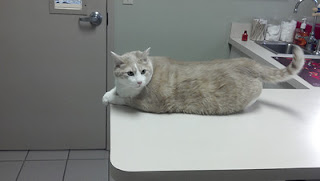 The Vet Tech came in to look over Jabba first, and then the Vet came in.  The Vet Tech took his temperature (which he was NOT happy about), weighed him, and looked at two spots that I had noticed on him.  Apparently they were cysts that were not big deal, they are kind of like pimples on us they said.

For some reason when she was petting him, he hissed at her.  I have never seen/heard Jabba hiss at anyone!  I don't know know why he did it, she was only petting him.   I apologized to her (I don't have kids, but do you sometimes feel the need to apologize for your kids?) and she said it was no big deal.  I still can't figure out why he would do that.  Maybe nerves?

When it was time to get weight I just pointed to the scale and he hopped right up on it to get his weight. Good boy!  When he was done I gave him some catnip treats that I had brought with me to calm him down.

They did keep saying what a beautiful cat he was and scratched his ears.  He loved the attention! 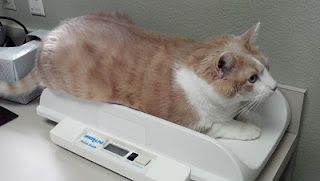 The final weight?  26.05...he lost weight!  At one point Jabba weighed around 28 lbs, but now he is down 2 lbs!  The doctor didn't seem too concerned about his weight since he naturally had a big build, but she did say he did need to get to around 20 lbs to be on the safe side.  She said at around 20 lbs he will start to look a little boney so we will keep bringing him back to check his weight.  So, to all of you who said he is super overweight, you were wrong!  A 20 lb cat is what he should be. :)

She did suggest that I put him on a different wet cat food (he gets wet and dry food) when I told her what brands I had been using for him.  I currently use Purina Indoor formula for his dry food and a half of a small can of Fancy Feast now.  She told me that Fancy Feast has a lot of fat, acid, and phosphates (sp?) so I need to switch the wet.  I went to Kroger but I couldn't find a better formula so I will have to see about switching at another time. I am thinking about Blue Moon or Blue Buffalo (whatever it is called), I heard it was really good for cats even though it is pricey. 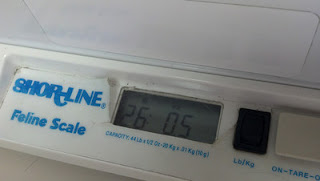 Overall Jabba did great at the vet!  He was even given a free mouse toy for being such a big boy. :)  I guess the mouse toys are sort of like suckers for kids?  He was tired from the shots when he got home, but other than that he went right back to his regularly scheduled cat life.

Posted by Stephanie at Saturday, December 22, 2012