After my half marathon on Sunday I really wanted to lay low over the next few days and just enjoy spending time with my family.  I got up early on Monday morning with the intention to run or exercise a bit, but then I decided to take it easy (read: be lazy) because of my half marathon the day before.

I headed to the mall around 8:30 am to buy some gift cards, then Ross to look for another New Year's Eve dress (a girl's gotta have choices!), found two plus one work dress (I get 90% of my dresses at Ross) then headed to my sisters house to hang out with the boys. She needed help cooking (hahahaha) so she recruited me to do some chopping.  Her husbands side of the family was all coming to their house to spend Christmas Eve and have an ornament exchange.  I was planning on going over there after I went to my Mom's, but by the time we were done, everyone was already gone.

She had signs like this on the counters to add some holiday cheer.  Cute! 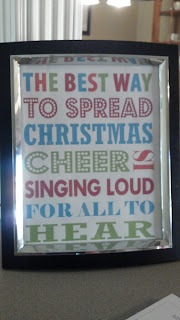 It's Santa Hunter!  I brought over the beard from the Santa Hustle Half and let Hunter and Cole play with it.  Hunter was a fan, Cole not so much. 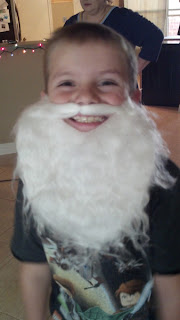 Cole playing on his tricycle and wondering what was going on.  Why couldn't he pull out all his toys and all of the pots and pans like normal?  Mess?  What mess? 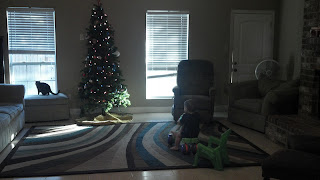 Then I headed over to my parents house to spend time with them.  First, we went to church for the Christmas Eve service then we headed back to my Mom's house for our Christmas tradition.  In the past we have always gone to my grandparents house, but since this is the first year without my Grandfather, my Grandmother wasn't up for having us all over.  We continued on the same tradition as each year before, but with the memory of Grandfather. 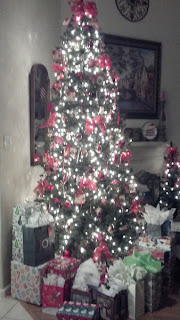 My Mom has a huge slight obsession with nutcrackers.  Slight has in over 500.  Crazy.  This is just a small sampling of them all.  Don't try and sleep over, they might just come alive and freak you out. 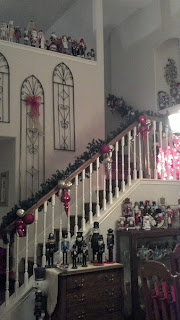 For dinner we had gumbo and tamales plus lots of sides!  My favorite was shrimp cocktail!!!!!! 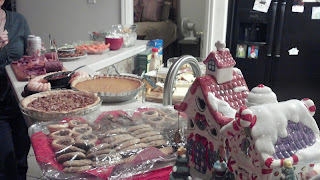 Then my Mom made a huge cheese display with tons of different cheeses and crackers.  There are only a few pictured here, but there was tons of cheese!  My sister made these cut little flags for each cheese so we would know which cheese each one was without having to guess and get them wrong.   My Mom/Sister spelled 'Bleu' wrong apparently. 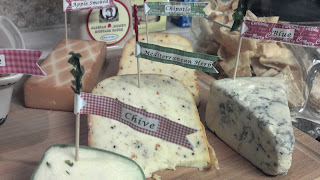 After our bellies were full we followed our tradition of reading the Christmas story from the Bible and then we all went around saying what we were thankful for.  Afterwards, my Uncle and Aunt from Florida brought out some Christmas crackers and we each got one.  All of the crackers came with a hat, a toy, and a joke.  This is my Mom and my cousin Steven's girlfriend Lauren (they drove in from Philadelphia). 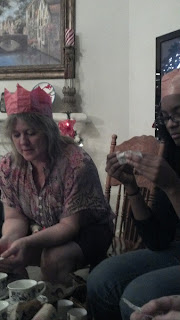 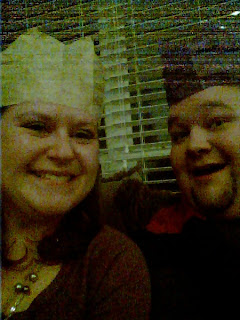 My toy was a 'fancy' watch that everyone was jealous of.  It wouldn't fit on my wrist though so I can't look fancy. :/  Sad day. haha. 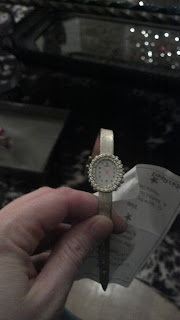 After we opened the crackers and did the Christmas story, we opened presents.  After I left my Mom's I went to my Dad's for a little while to open their gift also. I will post more pictures of what I got tomorrow!!!    Stay tuned. 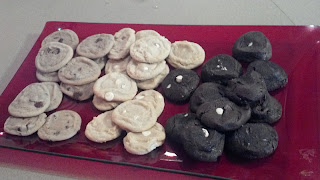 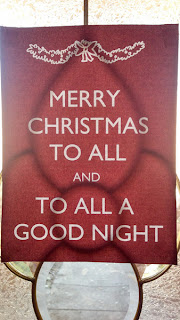 Posted by Stephanie at Thursday, December 27, 2012