The Friday night before my marathon me, my sister Laura, my stepbrother Brandon, and our cousin Leigh Ann all took my grandmother to a painting party as her Christmas present.  We found a Groupon  for Vino Artino in Spring for a three hour class that we each bought, and also one for Grandmother.  This was my third time painting and Laura’s second time, but everyone else’s first time.

Grandmother isn’t a very crafty person, but we figured she would have lots of fun spending time with us and a painting would just be bonus.  I think she was worried about how the painting would turn out, but the painting was just some trees, so how bad could they turn out?  Hmmm.  Keep reading!

First we all went out to dinner at an Italian restaurant called Mia Bella off Louetta.  I had been carb loading all week in preparation for my marathon, and since it was right before I needed to continue to carb load so we opted for Italian food.  Leigh Ann and I live near each other so we drove over together.  Brandon came straight from work and Laura and Grandmother rode together also.  The restaurant was good and they gave us tons of bread!  Score.

We had a reservation for the class so we had our seats set out for us and didn’t have to worry about saving seats for everyone or getting there super early.  We each got a blank canvas , two brushes, paint, and a mixing tray to start out with. 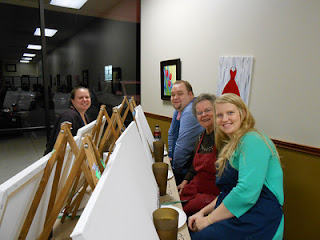 The instructor guided us step by step so we wouldn’t get lost.  However, if you know me, you know how much I like to talk, my family is no different!  We kept cracking jokes and laughing amongst ourselves and our two other table mates that we had just met so we kept getting lost and not hearing the directions completely. 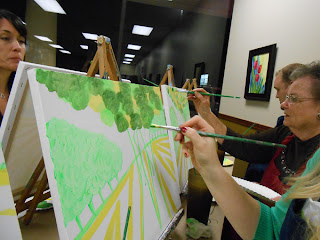 Vino Artino is a BYOB wine and art class, but since we were with Grandmother and Leigh Ann was pregnant, we didn’t BYOB.  We did BYOC though with cupcakes from Treat Cupcakes!! 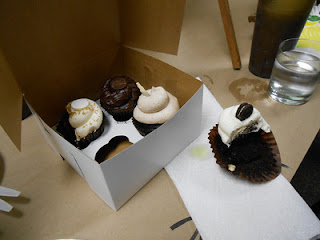 As the paintings went along we each decided that we didn’t like them and we must have lost a direction or two somewhere along the way.  I really don't know how it was so difficult to paint trees!  SMH. 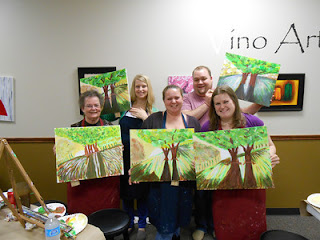 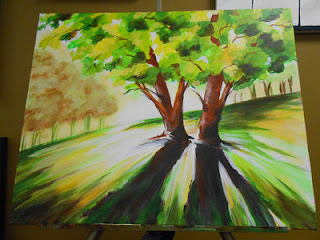 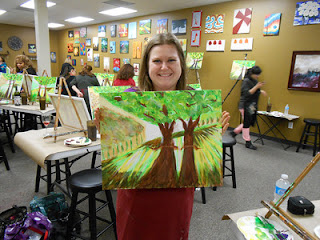 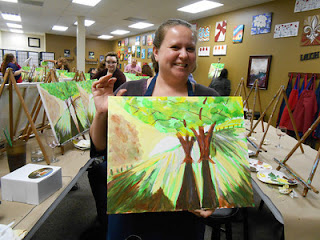 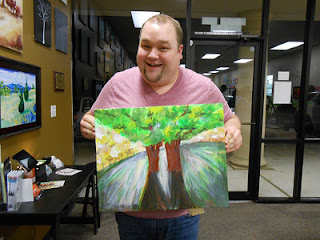 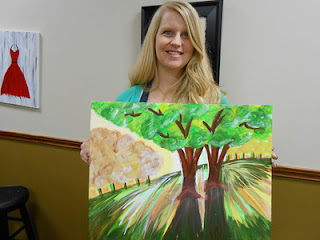 For some reason, I don’t think I got a picture of Grandmothers!  Oops!  Just look at the group pic.

We had a blast though and I am so glad we got to go!  On the way home that night Laura asked Grandmother if she had fun and if she would go again, Grandmother said “Yes, but not too soon.”  I guess it was a hit but I think she had more fun with us than actually painting a picture.
Posted by Stephanie at Thursday, January 17, 2013