My friend Lori is moving to North Carolina at the end of July to live with her fiance Clyde.  I will miss her so much!!  Lori and I met at SFA when we were in Student Government together and became fast friends. For some reason I did not take a picture with her (duh!), but she is in the limo ride pictures. from my 30 under 30 list :)

Her friend Jennifer and her Mom threw her the shower and it was so cute.  The theme was Texan (since she is moving out of state) and everything turned out so well.  Here are some pics.

Let's start with the dessert first!  The cake!  Do you see the Texas flag?  The cake was really, really good and it had the strawberries and blueberries inside the layers. It was not a triathlon training approved dessert item. 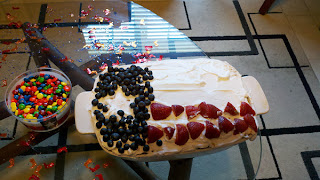 The coffee table was so cute, it had cupcakes (the entire cupcake display was in the shape of the State of Texas-do you see it?  Sorta?), red, white, blue gummy bears (OMG I love gummy bears, absolutely a weakness of mine), M & M's, and boot shaped confetti. 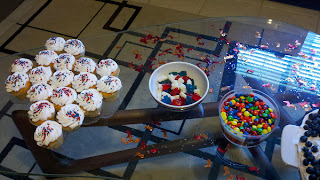 Red, white, and blue poms hanging from the ceiling 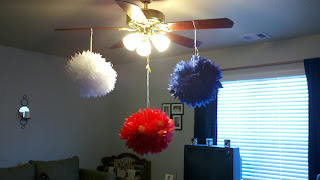 I love this!  It is a ceramic boot with red and white carnation, then they added a yellow rose (the Texas state flower for those of you who don't know that!) to the middle.  LOVE! 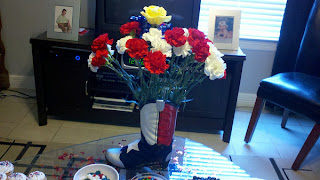 The food!  There were chicken nuggets, cheese dip, salsa, olives, sandwiches, and veggies. 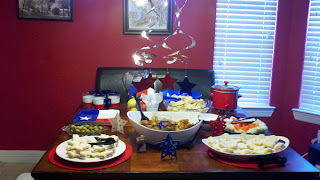 Even the plates and cups were Texas themed!  They thought of everything. 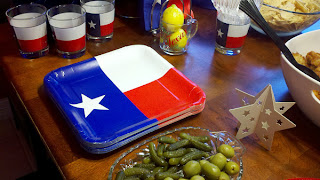 A close up of the sandwiches.  There were two different kinds, ham or turkey and they used a cookie cutter to cut them into the State of Texas shape. 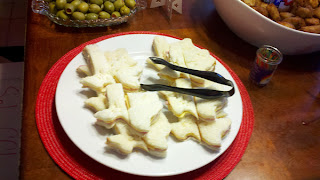 It was a great party and I am sad that I didn't get to get a picture of the bride to be. :/  Lori said she was having a packing party so I will be sure to get one then.  I will miss you Lori!!
Posted by Stephanie at Monday, July 02, 2012