The same day we went Sea World San Antonio to ride roller coasters we also met some dolphins from the park! 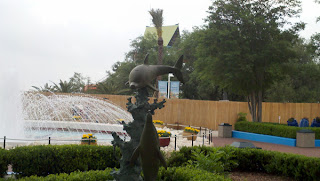 My friend Lily and I bought tickets a few weeks ahead of time for $75 for a Dolphin Discovery Tour.  There were about 8 of us in our group and we went behind the scenes.  Honestly I was a little disappointed in what we got for our $75.  We were under the impression that you get to go in the water (they suggested a bathing suit when I called for the reservation), but we didn't even get to stick our feet in the water. Hmm. Must ask more questions when requesting info. :/  There are actually two options at Sea World San Antonio for dolphin experiences, this option was the Discovery Tour but there is also an Encounter Tour that is a bit cheaper.  We choose the Discovery Tour because it was less people in the group and you get more one on one interaction with the dolphins. (edit:  There doesn't seem to be another option for the Encounter Tour anymore, I guess they discontinued it.  Check with Sea World to be sure though)


My 30 under 30 item said to Swim with Dolphins, but there is no place in Texas where you can actually swim with the dolphins and honestly I think I would have been freaked out if I was asked to hold on to a fin and let them pull me out to sea.  I compromised with Sea World!  I will say it was really fun and exciting, I just wish I could have gotten in the water with them.

They took us behind the scenes and we passed different pumps and wildlife areas.  We learned a few facts that were neat.  For instance, did you know that all the water in the park has been there since it opened?  All water is recycled, even the condensation from the pumps goes into a drain and is recycled.  Pretty neat!

They had us sit under a canopy and two trainers came to speak with us about the dolphins.  In the picture below you can see the area where the dolphins that aren't currently in the actual park are held (they are rotated every so often).  There are several different pools for the dolphins to swim.  Depending on the sex of the animal and how aggressive they are to the other animals depends on which pool they are in and how many are in the pool. 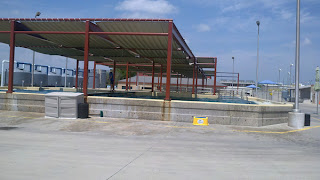 This is what they use to transport dolphins into different parts of the park. 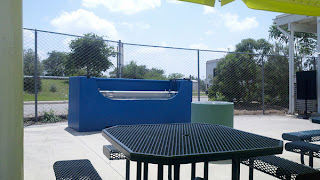 They showed us a few different pools and told us about the animals.  One pool held several dolphins and they just loved the attention!  Dolphins are adorable. 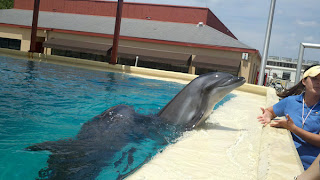 Then we got to pose with a dolphin so we could take home a free dolphin picture souvenir.  As another souvenir you got a tote bag and a waterbottle.  I kept the tote bag, but gave the water bottle away since I have so many at home.  I gave it to my friend Brandi that we saw there. 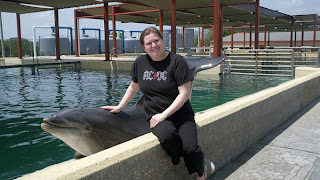 Then they let each of us do different tricks with the dolphins.  They would catch balls for us, twirl, wave, do flips, let us pet them, show us how they took medicine and got examined by the doctor, and lots more. 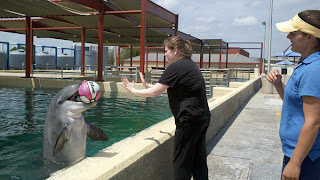 Then as we were saying goodbye they decided to splash us !  They told us beforehand that we might get wet and had the option to move. 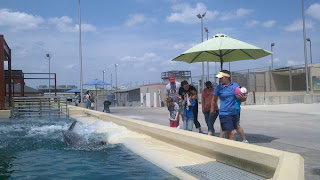 I had a fantastic time and fell in love with dolphins.  They have now become my 3 favorite animal behind flamingos and penguins.  I highly recommend seeing the behind the scenes tour.

Email ThisBlogThis!Share to TwitterShare to FacebookShare to Pinterest
Labels: 30 under 30, Fun Places, Fun things I can say I have done