#28 on my list of 30 under 30 was to ride in a limo.  I had been hoping that I would find a way to ride in a limo somewhere, but it was getting close to my deadline so I called and booked a limo myself.

I wanted to go around and bar hop finishing up the last of the 30 margaritas so I called some friends and asked them to go with me.  Mandy, Erika, Lili, Lori, Debra, and Kennisha were the people who ended up coming with me.  I told everyone to come around 7 pm and we would head out to dinner.

The limo got there around 6:50 was awesome!  I highly recommend Houston VIP Limo Service.  Our driver was nice and really fun.  He made sure we were having a great time. 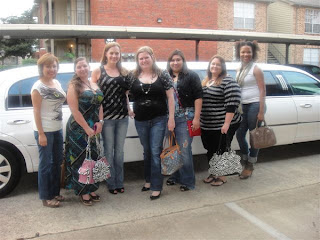 My original plan was to go to 5 different restaurants/bars and have a margarita at each one.  At this point, I had 6 margaritas left on my 30 list.  I wanted to have my last margarita at my 30th b’day party, so I chose 5 different places.  Yard House, Cyclone Anayas, Hank’s Crawfish, Next Door, and Three Sheets Bar and Grill.

We headed to the Yard House in City Center for dinner.  My friend Colleen had told me that they are super packed on Saturday nights and that I needed to call ahead to get a table.  At about 6:45 I told them we were on our way and to expect about 7 of us.  We got there and right away we were seated.

I had the shrimp pasta and it was really good!  Everyone chose something different, there was a pot pie, garlic seafood pasta, blue crab cake hoagie, turkey burger, mac and cheese (YUMMY!), and they have THE BEST parmesan truffle fries ever.  I highly recommend going there.  The margarita I got at the Yard House was the Silver Caddy margarita.  It was good, but not my favorite of the night. 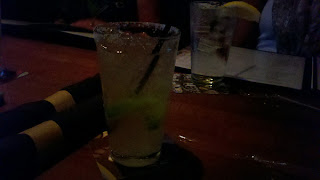 Then we hopped across the street to Cyclone Anayas.  We all got a margarita from there.  Kennisha and I both got a strawberry margarita, everyone one else got regular.  We were running low on time (dinner took forever!), so I told them all to chug the margarita!  Do you know how difficult it is to chug a frozen margarita?  Talk about brain freeze!  We headed out to the limo after we had finished our margaritas.
I told the driver that we were running low on time so we were going to skip Hank’s Crawfish (sorry Hank..catch you next time!) and head straight to Next Door. 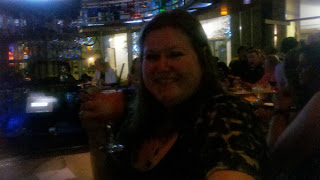 Once we got to Next Door we crashed a party and had their signature muddle berry margarita.  Not the best.  Actually, it wasn’t that bad but it needed to be stirred around.  We were talking to a group of cool people and somehow we got to talking about my 30 under 30 list.  They loved it!  After I took a picture with the birthday girl that’s party I crashed, we headed out to our next location. ..Three Sheets! 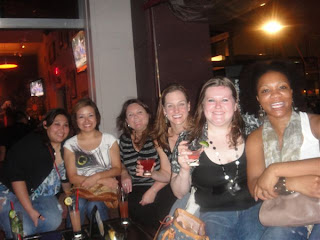 Ok, so when I read the reviews on yelp.com they said that the place looked sort of shady and they were absolutely correct!  The limo driver did not want to drop us off! LOL.  My friends were all weary of this place and didn’t want to go.  We almost didn’t go in, but my friends are troopers and they went in with me.  Safety in numbers!!!  The margarita I had at Three Sheets was by far my favorite of the night.  I had the bartender add grenadine to it (so good, I might try that with all my margaritas!). 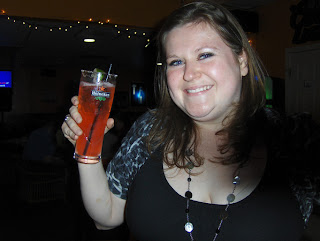 We sat down and noticed that a poker tournament was being played there that night and karaoke was being set up (SCORE!).  Now, many of you remember what happened last time I sang karaoke in public…it wasn’t pretty!  I was determined to redeem myself.  I tried and tried to get my friends to sing with me, but only Lori sang with me (right before that she sang Fancy by Reba McIntire-Lori is a great singer!).  What song did we sing?  Girls just want to have fun of course!  During the instrumental parts of the song I did a few dance moves.   You haven’t lived until you have seen me do the sprinkler, lawnmower, and the q-tip swab dance moves.  Classy.  The owner of the bar kept asking me if I got my free lap dance yet.  I tried to politely decline, but she kept insisting.  Now, I have never had a lap dance before and I wasn’t about to have one in a redneck bar on the shady side of the Energy Corridor!  Then she said that a lap dance was their signature shot. OH! OK. I can take a shot. Haha.  It tasted buttery but smelled awful (like a stripper!)  After I consumed my last drink, sang my heart out, and took more pictures, we left for the night and returned to our fancy limo that was waiting outside. 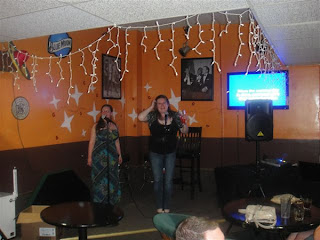 We got dropped off at my apartment and everyone left (I was the only one that had too much to drink so everyone could drive home).  I came home to my favorite kitty cat waiting at the front door for me to get home safely (and probably feed him!). :)  I heart my Jabba the Hutt.

Thank you to everyone who made my night a blast!!  I’m glad all of my friends got to come out and knock off a big item on my list.  Check out Houston VIP Limo Service for your next limo ride. :)
Posted by Stephanie at Saturday, June 02, 2012

Email ThisBlogThis!Share to TwitterShare to FacebookShare to Pinterest
Labels: 30 under 30, Cool places to eat, Drinking too much, Family and Friends, Fun Places, Fun things I can say I have done