Give me some beads

I am attempting to recap all of my 30 under 30 adventures and am running way behind.  This should have been posted in March! Enjoy reading about it though.

I drove down by myself (my Mom just about threw a fit about that-mind you it wasn’t that I was going, but that I drove by myself. LOL) on Saturday afternoon and got to the hotel about 9:30.  My sister had told me to make sure I stop and get gas no later than Lake Charles because random people walk up to you and ask you for money.  Once she freaked me out I pretty much hurried along when getting gas/stopping to pee so I wouldn’t get harassed.   I had already had a loooong day by getting up early to drive to Spring for my friend Mandy’s sons 5th birthday party then I got on the road about 2:30 (my goal was to leave Spring no later than 2 pm…I talk to much so that didn’t happen).  I had rented a car because I would be driving right at 1,00 miles that weekend (Route: Pearland to Spring, Spring to New Orleans, New Orleans to Nacogdoches, Nacogdoches to Pearland= 1,000 miles) and I didn’t want to put that many miles on my car. I already drive almost 100 miles a day to/from my new job (new apartment March 17th!) so to give my car a break I rented one (a Hyundai Santa Fe was really nice, you should get one!).

Anyway, Amber was coming from Nacogdoches and we would be in I-10 at the same time in Baton Rouge.  I had originally wanted to stop and eat dinner together then follow each other the rest of the way, but we were running late so I told her to meet me at the hotel.  I stopped at BBQ place and had dinner, I really wanted Cajun food but I couldn’t find one right off the road in Baton Rouge.  The restaurant was great though, I had a BBQ sandwich and a side salad.

Back on the road I got to the hotel around 9:30 (I still beat Amber…she drives slow!) and we changed clothes and headed out. We parked under the freeway and walked to Bourbon street.  Apparently we had just missed a parade because there were TONS of beads on the street.  Street beads=Don’t pick up because they smell like pee!  We made it to Bourbon street and got a drink (Margarita? Yes please!).

On the way to Bourbon street we saw a girl almost get abducted!  We were stopped at a light and all the sudden this van started jerking.  The driver and passenger were fighting (and the car wasn’t in park?! Really dude?) and the girl was trying to escape out of the van .  Someone from the back of the van got out and tried to push her back in, but eventually she got out and was all bloody and stumbling down the street.  We didn’t want to just leave her so we watched her until she went inside and got help with a police officer.  I don’t know if she wanted to go with those guys at first (she looked wasted-no sure if it was drugs or alcohol), but when she wanted out they almost didn’t let her go.

After that drama we kept going down the street and got some beads (nope, not that way!).  The balconies were filled with people throwing beads.  If you wanted big beads you could buy  them in a shop, or you could flash something.  I didn’t want beads to begin with, much less big beads so I stayed away (EDITED STORY :)  ).  I really got beads for my sister, my nephews school has a carnival every year that gives out mardi gras beads so all of the ones I got were for her (plus, she only needed smaller size beads so large ones wouldn’t have done any good and I didn’t want them at my house). 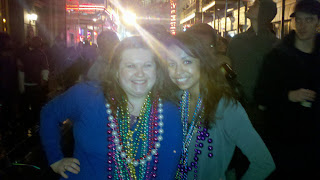 We left around 3:30 to drive back to the hotel and we finally fell asleep at around 4 am…super long day!

The next morning I knew I wanted to see a parade so we got up early and headed out around 10 am (9 am is early when you got to bed at 4 am!).  We took forever finding parking spots, we drove seperatley because I was going to leave straight from there to go to Nacogdoches and she was going to hang out with some of her other friends that were there.  We got to the parade route about 20 minutes before the parade started.  We knew that the cool people get on risers and catch beads so we found one by Luke’s restaurant and walked up the steps.   No one stopped us and we hung out there talking to people while there.  They said we should have had wrist bands on but we could stay as long as the bouncer didn’t kick us out.  We caught tons of beads there!  I told them about my sister’s carnival and people handed me bags of beads.  I got a to-go bag from Luke’s restaurant to hold them all. 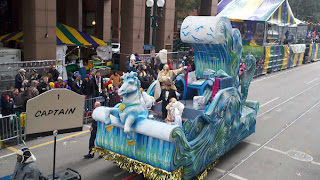 After the parade was over we were starving!  We wanted Cajun food, but at that point any food would work.  Luckily we found a great cajun restaurant towards where we parked.  Amber we to check on the cars and drop off my beads while I waited for the table (one of us had to stay).  When she came back she said she had gotten a parking ticket (oops! Note to self: don’t park on the streets of New Orleans!) but my car was fine.  We ordered the most AMAZING cheeseburger French fries. OMG, it makes me want them just typing this. Then we both ordered other food.  Nothing compared to those freakin’ French fries.

After we ate we went back to see another parade.  We couldn’t get back up on the balcony (we actually didn’t try, but decided not to press out luck) and went to look for another good place.  We got lots of beads and kept going down the street further to find a better spot.  We ended up next to a set of bleachers for military families that were super sweet.  I also told them about my sister’s carnival and at the end of the carnival one family gave me all of their beads!!!  At the end of the parade I had so many beads my bag was breaking. 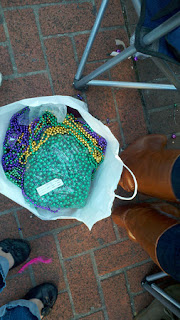 I decided it was just about time for me to get going because I still had a 6 hour drive home.  My original plan had me leaving right after lunch.  What time did I end up leaving New Orleans?  6 pm!  Amber and I headed back to the car, but were held up by the parade when we were trying to cross.  The police were going to let about 40 people from our side go across when the parade finished so there wouldn’t be a mad rush and everyone get trampled.  I told Amber to hold on to me so we could both go and not lose each other.  We were one of the lucky 40 people but Amber got stuck and her shoe came off. I kept pulling on her to make sure she came with me but she wanted her shoe. LOL. She said she had contemplated leaving it, but remembered how disgusting the streets were and went back to get it.  We laughed so hard. (It WAS funny, you had to have been there and been sleep deprived).  One little boy fell down and another guy was being a jerk, but we made it across and it was time for me to go. I said goodbye to Amber and left for Nacogdoches!

The ride to Nacogdoches was semi un-eventful.  About 10 pm my phone started to die and I didn’t have a car charger.  I stopped at a gas station to ask where a Wal-mart was and told them I needed a car charger, a guy in the store said he had one that I could have.  I was scared that if I went out there I would get attacked or something, but he brought it in to me and said that he had bought one of those kits with all of the attachments and he had that one left over.  Cool!  (thanks random guy at the gas station, that was really nice of you!).  I did keep watching my rearview mirror to make sure he wasn’t following me, lol.  He wasn’t though.  I was so tired when I got to the Texas line that I stopped in a church parking lot and fell asleep (with the doors locked!) for about 30 minutes and got back on the road.  I made it to Nacogdoches about 1:30 am and fell right to sleep.

That’s my Mardi Gras story.  Nothing to wild, as you all know I am not a big partier anyway so I hope you didn’t expect some wild story.  Even if something had happened, it would have been edited. ;)

Do you have any wild Mardi Gras stories?  I want to here them!
Posted by Stephanie at Saturday, June 02, 2012

Email ThisBlogThis!Share to TwitterShare to FacebookShare to Pinterest
Labels: 30 under 30, Beer, Drinking too much, Fun Places, Fun things I can say I have done