In addition to the other stuff that I am bringing on my trip, I also made a ton of file folder games for the kids.  I figured that they probably played a lot outside and people who volunteered probably brought balls and stuff all of the time.  I decided to bring educational toys as well as ‘fun’ stuff for them to do.  Plus, it’s colder outside now and they need indoor games as well.  Enter file folder games. 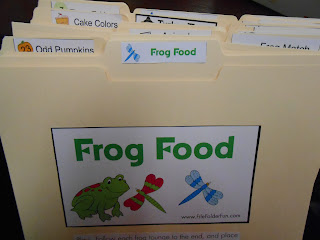 File folder games are a bunch of educational games, that teach a skill, that are housed in a file folder for easy storage.  I have loved the idea of file folder games forever!  When I worked at a childcare center in high school and college they had them for the kids, but I would always have to color them with crayons or markers which got very annoying.  I was about to go to the teacher supply store down the street when my sister told me to look on Pinterest or the internet.  I did and I found a ton of free printables that were already in color that I didn’t have to worry about coloring myself.  What a timesaver!   There were several other sites my teacher friends told me about also, but my favorite was www.FileFolderFun.com

I got a ton of free file folder games from that site and they have all been great.  You have to watch the spelling on that site though, some of the files have spelling mistakes.  I printed out the games and went to work cutting them out.  I over estimated how long they would take me to cut them all out!  My hand started cramping with all of the cutting I was doing.  I bought a bunch of glue sticks and file folders at Target to create them with.  I think the pack of 100 file folders was only $6 at Target.

I had no idea what reading and math levels the kids were on, so I printed out a variety of games for different levels and ages.  I stuck with the basics of addition, subtraction, and multiplication as far as math goes.  For the younger kids I printed out counting games, color matching, and animal matching games.  There were others on the site that had decimals, noun/verb distinction, rhyming, etc but since I didn’t know if they were learning that in school I didn’t want to confuse them, especially if I am not there to play the game with them.  Also, they are learning more of a European curriculum, so some of the American curriculum might not be the way they are learning it or spelling the words.

My nephew was over when I was cutting them out and I had a few of them put together.  He loved playing with them and didn’t realize they were actually reinforcing what he learned at school.  He thought they were fun games.  So if he likes them, then I am hoping they will like them too. 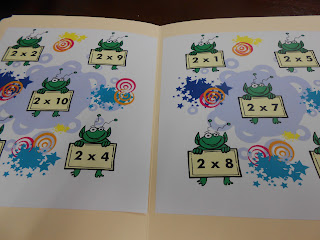 This is a multiplication game, all the multiplication ones have an answer key on the back of the folder.  This one has a little space ship as the pieces to the game. 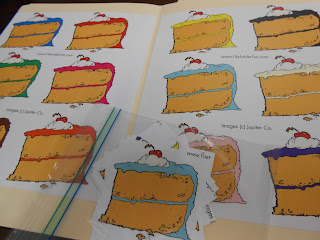 This one is a color matching game.  They match the colors of cake icing together.