I hope you all have had a wonderful start to 2014!  My New Year’s Eve was super fun this year.  My original plan was to travel to Dallas like last year and we would all go out again, but in mid-December I decided that I didn’t want to travel to Dallas and wasn’t up for partying too much.  I have never been one to drink a ton and babysitting a bunch of drunk people til 3 am just wasn’t something I have the energy for these days.  Last year was really fun, but I just wasn’t up for it this year.  I was really sad that I wouldn’t see my Dallas friends, but hopefully they will come to Nacogdoches for the DrivingJacks 5K in April!


So what did I end up doing for New Year’s Eve?  I went to a Rockets game and then we had a private party at the stadium for about 500 of us.  My church, Houston’s First, has a HUGE single’s department and each year they host a New Year’s Eve party at a different venue.  Last year the party was some sort of hoe-down, but that isn’t my thing (plus I went to Dallas).  There isn’t drinking at the party, which was 100% fine with me!  It is so much easier to have fun without worrying about DD’s and making sure your friends don’t get arrested or go home with someone they shouldn’t. LOL. 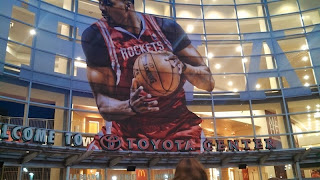 I got off work at 3 pm and headed straight to Starbucks.  I knew that I wouldn’t be able to stay awake by myself without some sort of caffeine in me, so I got a venti pumpkin spice with an extra shot.  I am a person who goes to bed early (by 10 pm) everyone night and anything past mid-night better be a REALLY special occasion. :)  I also had volunteered at a New Year’s Day 5K and had to be there at 6 am and I knew that Starbucks wouldn’t be open then, so I got another iced latte without the ice.  Trick/life hack:  Get the ice latte without the ice, stick it in the fridge, add ice whenever you are ready to drink it so it won’t have a watered down taste! 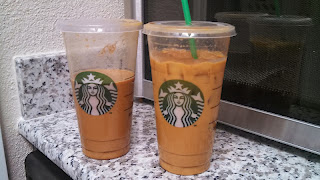 I wasn’t sure what I wanted to wear to the party; I had a few ideas but when I went to try them on, they didn’t fit or didn’t look right.  I am determined to lose the weight I gained back since finishing marathon training.  I ended up wearing the dress I wore to Chelsea and Matt’s wedding last year with a sweater and heels.  Several people were carpooling to the event, so we all met up at the church at 5pm.  We got to the Rocket’s game right at 5:45 pm and got our tickets and wrist bands.  I had never been to a professional basketball game before (or even college game I don’t think), but I have always wanted to.  You know what that means? BUCKET LIST ITEM!!!  :) 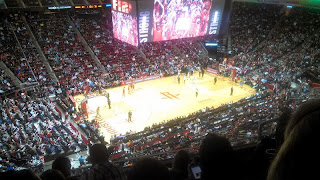 We sat down in our seats and watched the game.  At first I wasn’t into the game, but then as time went on I started to enjoy myself.  Let me tell you, Rockets games are much more entertaining than Astros games.  I love the Astros (or any Houston team), but OMG they are boring to watch.  Plus, in baseball they really don’t have a close up monitor.  In basketball you can see their faces  and stare at the hotties.  ;)  Just sayin’.  They also had great entertainment throughout the game, I especially liked the senior dance skit and the basketball players that did somersaults on trampolines!
After the game they moved us downstairs to the court for two people to talk to us.  One of them was the chaplain for the Rockets, and the other was a pro basketball player talking about his testimony.  I was upstairs helping set up for the event (it’s the event planner in me) so I only partly heard his story.  After I was done setting up the tables, I went downstairs just in time to get to shoot a free-throw on the court!  I did my best impression of a NBA player, but alas I did not make the shot.  My much hoped for career of being a pro basketball player did not work out. :/  Any scouts in the audience were disappointed I am sure. 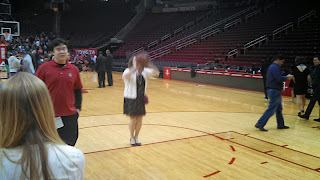 After we were all done shooting free throws, we all went back upstairs to the Sky Court area to play game and get our party on.  They had karaoke set up and guess what song we sang?  New Kids on the Block’s “You got the Right Stuff”.  We thought it would be super fun, but it turns out that it wasn’t a song we remembered very much so it sort of blew. LOL.  Next time I am totally singing Call me Maybe! 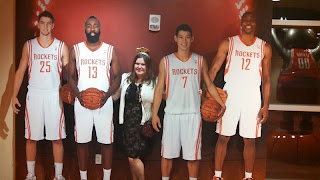 There were a ton of other games like basketball (obviously). 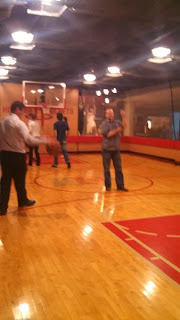 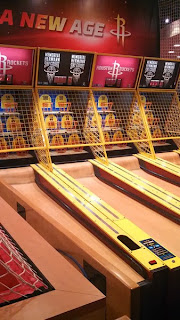 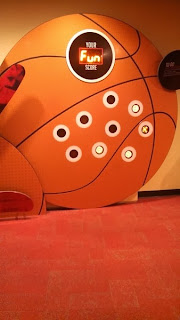 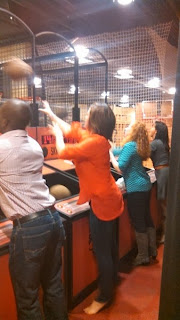 Wii (which I of course did not play) 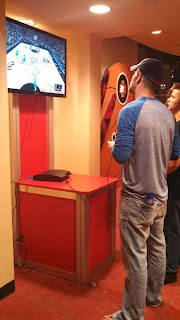 Then, you could put your feet in a model of pro basketball player’s feet.  These guys shoe size are huge! 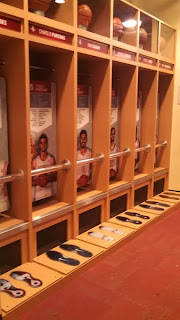 There was also a dance floor where we all met to countdown the night.  So fun!  We did some YMCA, Cupid’s Shuffle, and more.  They also had a late night breakfast of eggs, pancakes and sausage for us plus tons of sodas and juice.  The tables I had set up earlier had mints, party hats, blowers, horns and games to play. 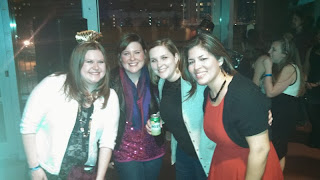 The party was over at 1 am, but the group I ended up riding with left around 12:45.  I got hope around 1:30 am and kissed a very cute cat Happy New Years and promptly went to bed.  I had to get up at 5 am to volunteer the next day.
Posted by Stephanie at Thursday, January 02, 2014