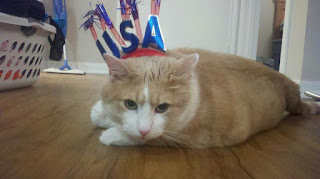 Everyone knows that I have the cutest cat in the world…Jabba the Hutt!  Every morning at 5:11 am Jabba wakes me up so he can eat.  Every morning.  However, for some reason he thinks that I will forget to wake up at that time and decides to try and let me know it’s ‘almost time’ to feed him.   Starting at 4:30 am he does a few things to wake me up.  He sits by my head and purrs really loud (which always wakes me up), he touches his nose to my skin (which always wakes me up), he sits on my chest or legs (which always wakes me up), or he jumps over my head and moves the entire bed.  Each time I exclaim “Jabba, go nigh night!” which usually gets me a “Meow” and a stomping to the end of the bed.  This is repeated 3-4 times within 45 minutes.  At 5:11 am my alarm clock goes off and Jabba goes nuts!  He will not let me lay back down in the bed after he hears the alarm.

You would think having a cat sit on you or jump over you would not bother you too much, but nope!  Jabba is 26 lbs so he quite literally can stop you breathing or cut off your circulation.  When he jumps over your head  and shakes the entire bed, you wake up.  For the past two years I have been dealing with Jabba doing this, but it has gotten progressively worse the longer I have had him.  I always wake up and feed him, he never goes without a meal, so I am not exactly sure why he feels the need to interrupt my sleep.

So instead of dealing with it forever, I decided to try and train him not to do that.  A few nights ago I got so aggravated that I got out of bed and of course Jabba followed me, once he was out of the room I shut the door so he couldn’t get back in.  Does that sound mean?  Well, sorry.  He was so confused and was just laying on the other side of the door and scratching it. :/    At 5:11 am I got up and fed him like I normally do, fed him, and got back in bed for another hour.  I have never shut a door on him in the entire two years that I have had him, so he was not happy.  The next night he didn’t bother me at all until I woke up at 5:11 to feed him.  It worked!  I think he got the hint that I didn’t want to woken up until the alarm went off.   Hopefully it works from now on, but it might take a few times for him to totally understand why I am doing it.

Hopefully I don’t sound mean, but I like to sleep and he gets fed about 45 minutes later.  #crazycatlady