On Saturday I co-hosted a mustache themed baby shower for my friend Krista.  Krista and I have been friends since college, and we even started Driving Jacks together.  Krista and her husband Tyler are having a boy who will be named Levi in May. 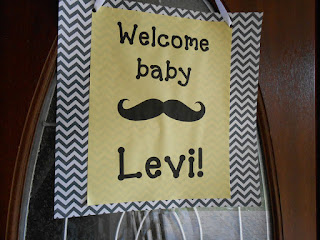 A few months ago I talked to Krista and asked who was hosting her a shower, she said her friend Katie was hosting it, but I could help if I wanted.  Katie emailed me a while later and asked if I wanted to help, of course I did!  Katie did a lot of the work and decorations, and I was in charge of the chocolate fountain and game.  I wouldn’t really call myself a co-host, I didn’t do as much as Katie did!

Future Grandma's!  Or Gigi's?  I don't remember what they said they would be called. 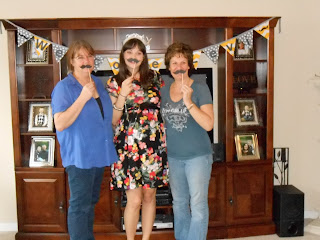 Katie had tons of cute decorations around the house with a mustache theme.  She had a banner sewn with “Welcome Levi” on it, and also onsies with a ties for the “little man’’ theme. 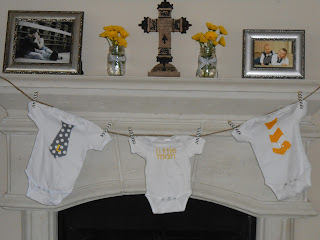 When you walk into the front door there was a wishing tree that everyone could write wishes on for Levi.  When I was writing mine all I could think of was the song by Rascall Flatts that says “My wish for you is that your life..” so my note may or may not have said something to that effect. LOL.  True story. 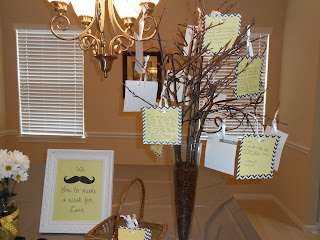 For food we had a chocolate fountain with marshmallows, pretzels, Oreo's, and strawberries.  I also made the tortilla roll up things with cream cheese, chives, and ham that went super fast! I <3 those things!  There was veggies and dip, and also pita chips with a cheese ball. Katie has a friend who is starting a cupcake business out of her house and she made chocolate cupcakes with peanut butter icing (OMG, so good!!) and vanilla cupcakes with chocolate chip cookie dough in the middle.  Katie also made the shower punch with grape juice, ice cream, and soda that is famous at showers.  I have only ever had it with sherbet, but the ice cream works just as well.  Delicious! 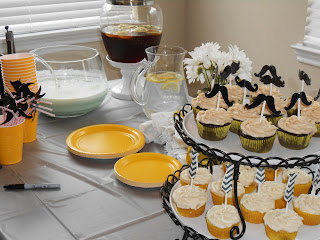 Originally, for the game we were going to have a Price is Right baby game where you name the price of certain baby items, but I dislike the normal baby shower games so I went on a google search of other games.  Since it was a mustache theme I found a game idea called “Name that Mustache” where you name the celebrity who’s mustache is shown.  I found 20 celebrities who had mustaches and cropped their mustache out of the picture and glued it to a half piece of yellow paper (the colors of the shower were grey and yellow).  The guests had about 10 minutes to look at all 20 mustaches and figure out who’s mustache it would be.  I didn’t give them a list of the celebrities, but I did go around telling them hints if they asked.  For Will Smith I said that he likes to save the world or with Matthew McCounney (sp?) I gave the hint that he likes to play bongo’s naked. LOL.  The person who had the most names listed would win a prize (Bath and Body Works lotion in blue since she was having a boy). 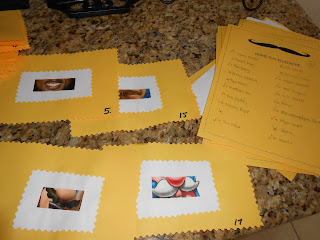 Of course there were straws with mustaches on theme. 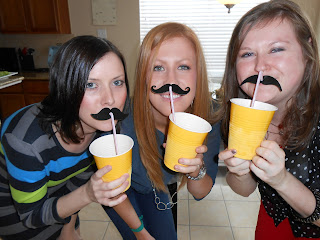 And we all took group pics with mustaches. 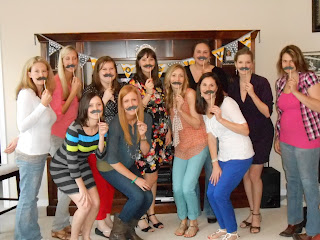 As a favor, everyone went home with cute cookies made in the shape of a tie. 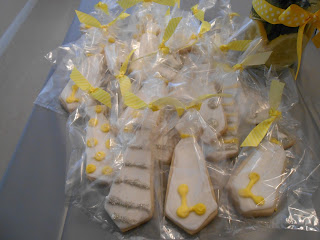 The baby momma and her shower hostesses. 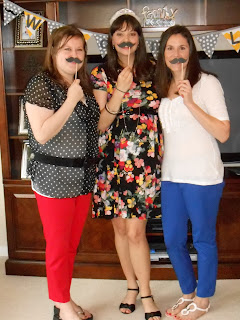 It was a fantastic shower and I am so glad I got to be involved and celebrating this fabulous future baby boy!  I can’t wait to meet him in May!

For more pictures go to www.flamingosandfun.smugmug.com
Posted by Stephanie at Monday, March 11, 2013