The Power of a Beanie Baby

You right remember this post from when I completed #30 on my list to send a care package to . Then, this post of when I got a letter back from one of the troops saying thank you!
Well, since then a soldier (his name in Kona) from that troop and I have became Facebook friends, have been chatting back and forth and are now FB pen pals J.  He told me an awesome story about one of the items in the care package I sent them.  He said I can share it with you.
In the care package I sent him were mini beanie babies that the website http://www.anysoldier.org/ said soldiers loved to get so they can give them to kids in villages that they visit. This is what happened when Kona’s troop went to a village about 10 miles outside of the base.  I have no idea where this was except that it was in somewhere (plus, even if I did know where it was I don’t think I would be allowed to say, lol). 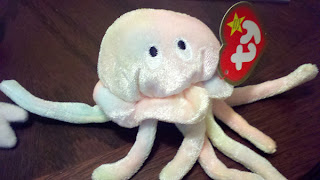 ----Kona’s troop went to a village that they had never been before and all the kids were afraid of them.  Kona had some of the beanie babies in his pockets and he pulled them out, a mob of kids came rushing towards him.  So instead of being tackled by children for little toys, he threw them up in the air.
One of the kids that didn’t get a toy literally kicks one of the kids that did get a toy in the chest, snaps the toy out of his hands, and runs to his house (he said qalat-I guess that means house?).----
Now, that story is funny, sad, and encouraging at the same time.  Funny because I can only image the scene of 20+ children fighting and kicking for toys that come in happy meals in the and all the soldiers just watching it all happen.   I really wish they had a video of that!  Sad because those children have to literally fight for a small toy because their parents can’t afford food, much less toys for their children. Unfortunately, violence is an every day occurrence there (everywhere actually) and that child might be taught it’s ok to cheat, steal, and fight their way through life.  The story is also encouraging to hear that soldiers are making a difference in those children’s lives.  A small gift of a beanie baby will bring happy times to that child and he/she will remember that a soldier gave it to him.  That child will (hopefully) remember the soldier who gave him that toy and when he grows up he will remember that we ( Citizens) aren’t as bad as the Taliban is making us seem. ßOne can dream!
Since that story makes me smile I sent set of beanie babies, matchbox cars, and random Happy Meal toys to Kona’s troop so they can give them to more children.  The box ended up being two packages, one a large flat rate box filled to the brim of toys and one care package + toys.   Originally I had sent out three care packages and only two of them got to the troops (the soldier had come home and it wasn’t delivered).  The 3rd care package is sitting on my couch and I am resending it to Kona’s troop with a few extra goodies and toys. 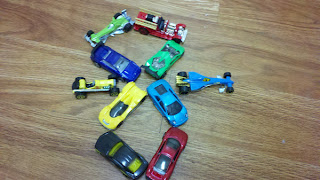 If you are interested in sending a care package/toys to a soldier go to http://www.anysoldier.org/ and choose a troop today!  It’s super easy and you never know who’s heart you will touch. A small gift can make a world of difference to a child.
Posted by Stephanie at Wednesday, December 21, 2011

Email ThisBlogThis!Share to TwitterShare to FacebookShare to Pinterest
Labels: 30 under 30, Giving