When I donate money to a charity I want my money to go directly to said charity, not only a portion of it.  For work we took a fieldtrip to the Lighthouse of Houston which is a seeing impaired facility.  At first I was hesitant about going, but once I got to the facility and saw who they were helping I was intrigued. 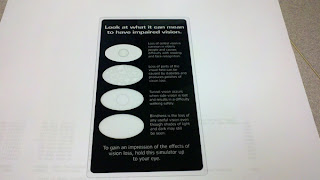 We went upstairs to a media room where they showed us the different types of computers that can be purchased (or someone can get one free through the government if they are a full time student) and also different portable systems to take with them for doing routine tasks like reading menus and typing.  These computers and programs range from about $800 to $1,000 retail so the need for funding assistance is great.
The tour guide told us about the different programs that the seeing impaired can take to lead them to jobs like medical transcriptionists, phone system operators, general office assistance, etc.  Next we went downstairs and down the hall to the activity rooms where she told us all about the M-F program where the mentally impaired go to learn basic life skills.  One thing about this section was that the huge toy directly in front of the window was missing pieces and two screws/nails were sticking out.  Dangerous!  We pointed them out to the tour guide and hopefully they will either fix it or remove it.
Next was the retail store were they sell items to help with day to day tasks for blind people.  There was watches, games, clocks, calendars, color indicators, etc. They even had Scrabble and Monopoly with brail letters.  So cool! 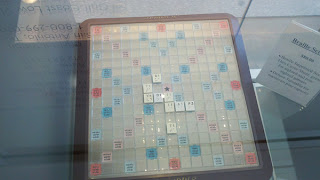 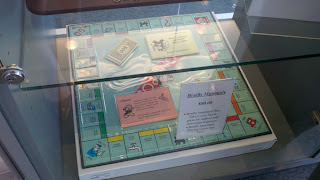 Overall the tour was great, but there were a few times when we all looked at each other and wondered why she just told us that…TMI.  Personally, I was expecting more of a sales tour as to why we should support this organization, rather than this is this and that is that.  It’s a great organization, and I might be interested in volunteering one day, but they need to re-vamp that tour a bit so they can get the people behind them.
Thank you to the Lighthouse of Houston for giving us a tour and showing us about your program and how you are helping the seeing impaired of and the
There is a big company that hosts huge campaigns to raise money and they divvy out the money that is raised to smaller charities that might not be able to get the money from corporations.  This said company (who I do not like and therefore will not say the name on my blog) has a huge overhead and not all the money goes to charities so I do not donate to them (plus they have been in the news for some shady things).  Like I said, if I want to donate money, it will be directly to the charity and not to a middle man that takes a fee. (ßedited to add: I understand that the large organization has to take a portion of the donation for their expenses, but when their expenses reach crazy and outrageous overhead levels, it’s time to cut back and I refuse to participate in that.)
Anyway, so we toured the Lighthouse of Houston and got to see many great things that they do for the blind and seeing impaired community.  According to their brochure, they service over 9,000 people annually through life skills training, outpatient rehabilitation, diabetes education, orientation and mobility services, Braille services, employment skills development, and many, many other great services.
One thing I thought was really neat was that the building was designed for blind people.  There is nothing hanging from the walls because seeing impaired people use their hands and canes to feel their way around so if items were on the wall they could be knocked down.  Also, the floor is white on the inside and darker on the outside so the seeing impaired would know when they are getting close to the edge of the wall or maybe a doorway.  Also right inside the lobby there was a big glass wall that had the brail system over and over.
We got this cool handout where you can see different way that people are blind such as tunnel vision, diabetes vision loss, central vision, and all the way blind that can see shades of light.
Posted by Stephanie at Wednesday, November 16, 2011