I have wanted to go to the Kemah Lighthouse Maze ever since I did the Toughest 10K Kemah run last year.  Several people wanted to go, but our schedules just couldn’t match up and time went on.  I had mentioned it to my church small group as an activity too, and they planned it as a teen outing instead and asked me to be a chaperone.  Yay!! I finally get to go to this thing!!!

I had my niece that week so she was able to go too.  She wanted to “beat everyone” because she is “so fast”. LOL.

Since I wasn’t sure how long an almost 4 year old would last at a maze plus concert afterward (every Thursday during the summer the Kemah Boardwalk has a concert), I decided that I would drive separately and meet them there.  We left around 2 PM to beat the traffic but stopped at a special place first. 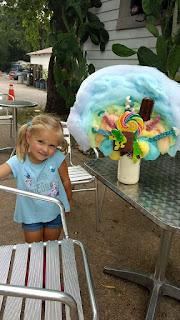 My sister had told me about this place called Brain Freeze in Pasadena off of Preston that had amazing frozen treats.  I showed the FB page to Kali and she of course wanted to go there. We got there and I wanted to get a smaller version of the drink but Kali wanted to “beautiful one like the picture” from earlier.  OK then.  I can’t say no to that little face. LOL. I’m a push over.

Brain Freeze only takes cash so be aware of that.  We waited around for about 30+ minutes before it was ready and there was no one else in line.  I mean, the creations are HUGE and take a little while to make, but the wait time is looooooooong.  It seems even longer with a four year old.

When this came out Kali’s face was like “whoa!”  Kali is allergic to strawberry (artificial or natural) so they had to alter it a bit.  Normally this one is full of strawberry candy and is even more colorful, but they were able to work around her allergy.  Just ask them!  They are super accommodating.  We ate a little bit, but there is only so much you can eat before you had to stop.  Luckily they have some to-go containers where I was able to take some of the candy home.

We headed to Kemah afterwards to meet up with the group. They split us up into two teams and everyone got their own punch card to go through the maze.  I thought it was just a maze but it turns out that you have to find five letters throughout the maze and get your card punched.  Kali was so cute running through the maze like a mad woman looking for the blocks.  She was SO excited when we found a letter. 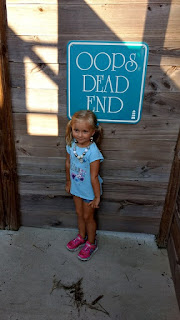 The last letter was difficult to find but we finally made it out of there.  We got a small toy when we finished for “beating” everyone.  We were actually about 5 minutes slower than the fastest team, but she doesn’t know that. LOL.  We were waiting for the rest of the group when she asked to do it again.  I asked if we can just walk through again and they said sure. I just pretended to punch a card since it was mainly to keep her busy while waiting.  The rest of the week she kept asking to go back there.  I think she liked it. 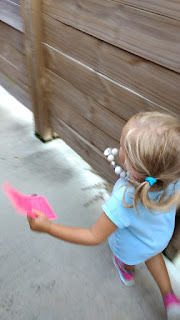 After the maze we went to the concert area (the Boardwalk) and walked around.  4 year olds don’t really like to sit still and watch concerts so we walked around and found the train.  We waved to everyone like we were princesses. :) 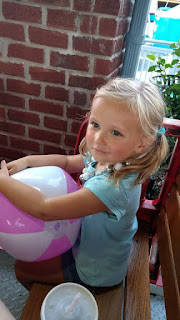 She promptly fell asleep on the way home.
Posted by Stephanie at Tuesday, August 15, 2017