Now that it is winter and my summer plants have officially quit on me, it's time for an update!  Do y'all remember when I planted my garden last Spring?  Well, my harvest was quiet plentiful for my first try, in my opinion. 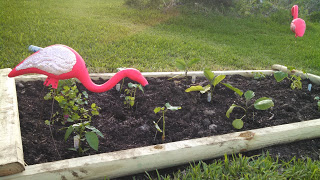 Here is the count:

Okra: 208
Cucumbers: 27
Bell Pepper:  1! It was tiny but it grew in December
Cilantro:  0 so ummm, these died almost right away in the Texas heat
Eggplant:  0  the plants themselves look awesome, but no eggplants came to be


Obviously, the okra did the best out of all of them.  I planted three plants and all three were very fruitful.  Okra is easy!  I had originally planned to pickle the okra but I never learned how to pickle stuff so that didn't happen.  I mostly just cut them up into small pieces to add to gumbos or bake as a side dish.  On my next garden I will for sure plant these.

The cucumbers were growing great at one point but tasted awful!  I heard that when they taste bad they need more water but I watered them a ton!  Oh well, I won't plant them again.  Towards mid-summer they just died all of the sudden due to what we think was some type of bug.  The bug didn't touch any of the other plants, but it loved the cucumber plant.  Plus, the cucumber took over everything in the garden so if I were to plant them again, they would be in a separate garden. 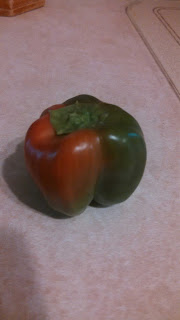 The bell pepper was always a tiny plant that didn't grow over a foot tall.  I think the Texas heat got to it because in the fall it started to have flower buds.  In late November/early December it started to have a little pepper on it.  BUTTTTTTTTT when I picked it to bite into it, it had been sitting there too long and it was moldy inside.  I KNOW!  I am grossed out again just thinking about it, but it happened.  LOL. I learned my lesson about biting into vegetables (that I grew at least) before I cut into them.  #dontdoit


Will I grow a garden next year?  Ummmm.  I'm not sure. I have been travelling a lot lately and I'm not sure if I want another one at this time. It isn't fair for them not to get watered or someone else to have to do it for me. I want to buy some land eventually and can just have one there in the future.

So, I will not be applying to get a date on farmersonly.com ;) haha
Posted by Stephanie at Friday, January 13, 2017

Email ThisBlogThis!Share to TwitterShare to FacebookShare to Pinterest
Labels: garden