For the new year this year I didn't feel like going out but I didn't feel like being an old lady and staying home either.  Lucky for me I remembered my bucket list and decided to cross off a couple of things.  That's right, this New Year I crossed off two bucket list items:  Seeing Dinosaur Valley State Park's dinosaur tracks and doing a polar plunge!  This post is about the dinosaur tracks and I will write a few more about the entire weekend.

I headed out on my first solo roadtrip and camping experience to Dinosaur Valley State Park (DVSP).  I knew I wanted to do a bucket list item but which one?  I started searching online and somehow came across a first day hike posting for a majority of hte Texas State Parks.  Two of my bucket list parks (within a weekend driving distance) were having a first day hike:  Dino Valley and Colorado Bend State Park.  I almost chose Colorado Bend State Park so I can see Gorman Falls, but I figured they would be better in the spring time plus DVSP was having a dino dive (polar plunge)!

All of DVSP's campsites were sold out so I needed to find alternate accommodations.  I thought about staying at a B&B but it was just me and $150 a night was not in my last minute budget.  Camping it is!  I found an RV site that allowed for tent camping at $20/night with electricity and a bathroom.  Score!  I set up my (newly purchased) tent and only needed three random people to help me put it together.
That night was New Year's Eve and I thought there might be some fun things to do in town, like a bar or something.  NOPE! Apparently (according to my friend Savannah), pasture parties (it is just like it sounds) are the rage in town but everyone else stays home with the bars/restaurants closing early.  In one of the building on the property they were having a Bluegrass concert/event that sounded fun.  And when I said sounded fun, I meant that there wasn't anything else to do except look at my shoes so I went so I would not be bored. 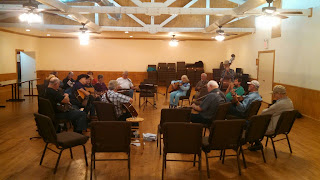 I thought it would have tons of people but it was a bunch of older people sitting in a circle playing instruments and singing.  No dancing, hardly any chit chat.  I decided to make friends though and a lady even taught me how to play spoons! It turned out to be a fun night.  The group travels all over the country in their RV's and meet up a few times a month in various places.  Pretty cool

The First Day Hike
First day hikes are a nationwide event where everyone meets at a designated spot on the campgrounds to do a group hike.  The purpose is to get out and move on the first of the year and (hopefully) continue to be outdoors doing lots of activities the rest of the year. 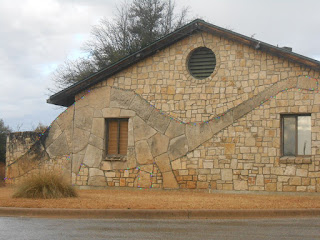 Everyone met at fossil site #3 at 10 AM and we split off in a short hike and a long hike.  I wanted to do the long hike but Clarissa was due to be there soon so I went with what I thought was the short one, but it turned out to be the long hike.  I was talking and wasn't paying attention. :/  Oops! 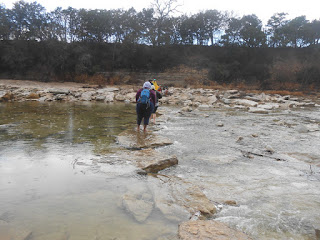 We had to wade in the river (shoes off) to get to the hike and I got to see my first set of dinosaur tracks!  The big holes are dinosaur tracks of a huge oval shaped foot and you can also see a three toed foot too.  (more pictures here-PW is flamingo) 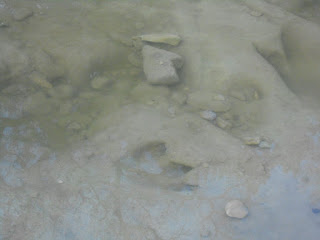 We passed by the area where the short hike was going and then I turned around.  There was another girl in my group that came back with me and hung out with me until her friend was done hiking.


We waited for about 15 minutes before Clarissa got there!  See part two tomorrow!!
Posted by Stephanie at Monday, January 09, 2017