My final destination for the weekend, Dinosaur Valley State Park, is 3.5 hours from Houston and you need to travel through Waco to get there.  I was reviewing the map and my bucket list when I realized that Jacob's Ladder was in Waco, too.  Perfect!  I can do that while passing through. 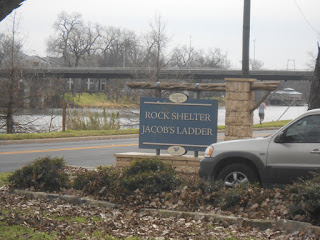 My GPS took me to the park easily and the signs inside the park led me directly to Jacob's Ladder.  Jacob's Ladder was originally an actual ladder but was replaced with  88 zig-zaging steps to the top of a steep hill.  It was just as hard going down as it was going up.  My thighs got a workout that day! 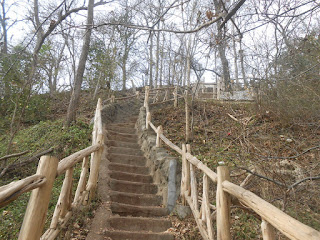 After Jacob's Ladder I had lunch at the Mad Hasher, which is a "hash" inspired food truck.  Mine was a potato hash with eggs (not plant based!), pico, assorted veggies, feta (??), and a creamy sauce.  It was so good and I highly recommend stopping by if they are open when you visit.  They were parked at a food truck area with several other trucks near the college, I believe. 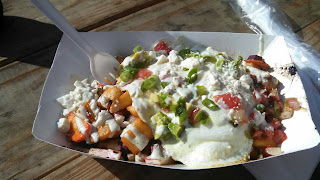 After filling my belly it was off to the Waco Mammoth National Monument to see some still in the ground mammoth bones!  At first I was not really feeling this place but I figured that I  had some time to kill before I needed to leave and it might be cool. Let me tell you, it was one of the coolest things I have seen. 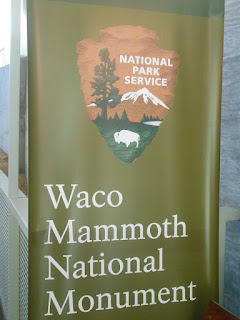 You have always seen pictures of fossils on TV or maybe fossilized rocks but these were actual bones that are still partially in the ground on a real live excavation site.  I LOVED it.  The tickets are only $5 and it is well worth the $$.

They take you to the actual dig site where some college kids back in the 70's thought they found a cow leg bone but it turned out to be a mammoth femur bone I think.  They turned it over to Baylor where they knew a paleontologist and they started excavating the site not too long after. 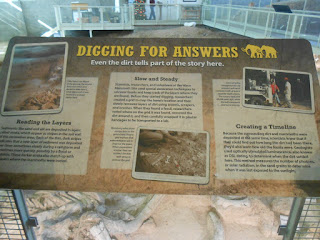 The area was a narrow strip of land between two rivers at one time and a flash flood came and wiped out about 20+ mammoths that were part of a nursery herd.  They figured out what had happened because the bones were sticking straight up as if they were caught in the mud when a flash flood came along.  They said that some of the mothers were even holding the babies in their tusks out of the water to try and save them when they died. ;(

They have found a ton of bone sites, even on layered on top of each other spanning years.  So the area must have been known for flash flooding because they would dig a little further down and find more, like the mud created layer upon layer of accidental cemeteries. 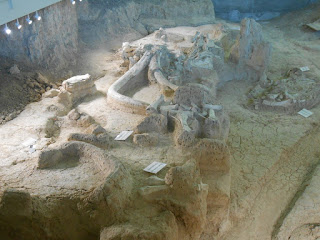 This is a real life example of the size of the mammoth from back then!! 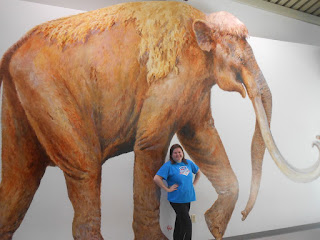 There are  more animals that they found in there including a camel and a sabor tooth tiger.  They believe there was a tiger cub den that collapsed at one time in the area.  So interesting! 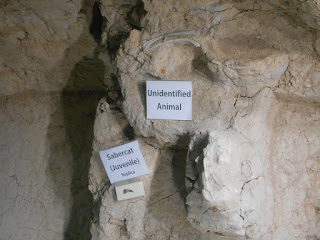 The building itself is on the actual dig site and can move to protect more fossils as they unearth them and can be expanded as the dig site uncovers more. 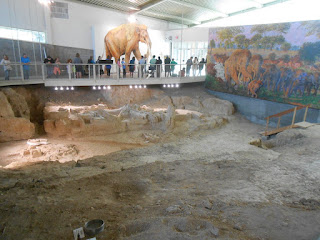 So, Central Texas is full of pre-historic animals between this site and Dinosaur Valley State Park. I can only imagine what they will uncover in the area next!  For $5, it is well worth the hour you will spend there.  Go visit it!!
Posted by Stephanie at Wednesday, January 11, 2017