Everyone knows Jabba is a bit ‘fluffy’.  Obviously Jabba likes to eat, a lot.  Well last weekend Jabba started eating about half of his normal food.  When I would get home for the day, he would still have tons of kibbles in his bowl that he didn’t eat.  My kid is an eater so I knew he was getting sick.  About two weeks before I left for Africa, the same thing happened and I had to take him to the emergency vet. 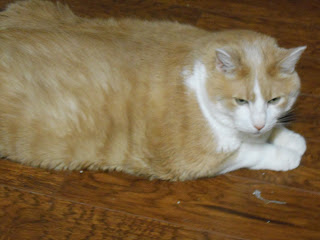 So on Saturday or Sunday when he stopped eating, I just hoped and prayed that he would get better and not throw up like last time.  On Tuesday though he threw up about 10 pm and I knew it was time to go back to the vet.  The next morning I took him to the vet’s office at 7:30 am before I headed in to work. I was hoping that they would see him right away, but it turns out that even though the vet’s office opens right at 7 am, he actual vet does not get there until 9 am.  I was debating whether or not I should just go home until 9 am and then take him, but I made the decision to leave him there and just call to check on him when the vet got there.  It was so heartbreaking to leave him there in a cage; I just knew that he was having flashbacks to when he was left at the shelter by his last owner. :/  Luckily there was a large (double) cage that he could rest in, instead of being cramped up in a small (regular) cage.  He refused to look at me the entire time I was there, I hoped he didn’t think he was being given up!  Heartbreaking! I think the nurses thought I was crazy. LOL.

So I called back around 9:30 am and they said that the doctor was just now checking up on him.  The doctor told me that they needed to run some blood work on him and also give him fluids so he wouldn’t get dehydrated.   Let me tell you, vet bills are expensive!  Jabba is worth it though, I don’t know what I would do without him.

The next day she called me back to say that Jabba’ triglycerides were in the 300’s (normal is 100-150 for cats) and he has IBS (irritable bowel syndrome).  The triglyceride problem will hopefully be fixed with his weight loss, but the IBS will be a reoccurring problem.  The vet said that the IBS might be lessened with weight loss, but we will have to wait and see.

When I picked up Jabba from the vet that afternoon around 1:30 pm, she had told me to stay and watch him for a few hours to make sure he didn’t throw up again.  He got home and I let him out of the cage, but he didn’t want anything to do with me.  I tried to sit by him once and all he did was get up and walk away.  Then I layed down by him, but he just looked at me and ‘meowed’ and walked away again.  He was not happy with me. Oh and he was also limping from where they took the blood out.  <--That was sad but I am hoping that he just has a flair for the dramatic and wanted to make me feel bad about getting tests done. 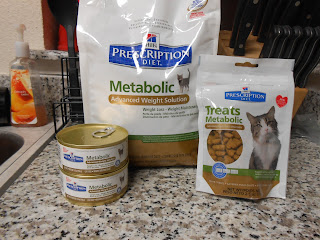 So, Jabba’s new diet.  They gave me a new food (dry and wet) to give him each day with very strict instructions on how much he is allowed to eat.  Normally he is my 5:11 am alarm clock each morning and he eats wet/dry food, and then at night he gets  a few kibbles.  That is his routine, and you don’t mess with Jabba’s routine.  He is allowed one scoop of wet food a day and 1 cup of dry food a day, so I give him ¾ cup in the morning with the wet food and ¼ at night.  I am already seeing a difference in his weight.  We have an appointment to see how well the new diet is working in a few weeks.

I was afraid that he wouldn't like his new food or treats since he is so picky.  He will only eat fish flavored wet food and catnip flavored treats.  I don't know if it tastes good or if he is just super hungry, but he is eating all of it!  Fingers crossed it will work.  I love having a big fluffy cat, but I want Jabba around for awhile so his health is my main concern.  He will still be super cute at 20 lbs.  <--The vet said that 20 lbs will be his weight loss max, he will be a boney cat at 20 lbs! 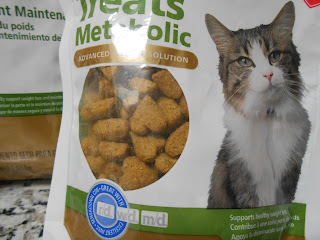 Look!  The treats are in the shape of little hearts!!  So cute.