Last Thursday a group of friends went to a performance at the Hobby Center called “Dixie’s Tupperware Party.”  DTP is a real Tupperware party that you can order products that are shown by a man in drag named ‘Dixie’. 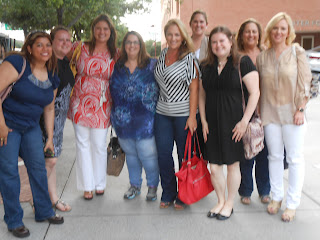 We met at 5:30 pm to eat dinner at Damien’s Cucina in the Midtown area.  I got there before everyone else and played on my tablet while I was waiting.  There were about 10 of us and we had to be on the free shuttle bus by 7 pm to get to the theater on time.  Damien’s was fabulous; I would absolutely recommend going there anytime, or for a dinner before a play.

Dixie came on stage in a blue dress with hooker heels and Texas size hair.  Dixie is a fast talking girl from the trailer parks of Alabama, who was forced to get a job by her parole officer in order to get her three kids back.  There was a crystal like bowl on the table of the parole officers desk and she was inspired to become a Tupperware sales(wo)man.  Moving up the ranks quickly, Dixie became Tupperware’s #1 sales (wo)man.

Dixie drank from her favorite cup that had a spill proof lid so she wouldn’t spill her wine (she drank actual wine on stage).  The show was hilarious!  We got to see her favorite products including a chip and dip set that the dip bowl rests inside the chip bowl for your cheese or your “Gawn, Gawn, Guantanamo”.  Dixie has a bit of trouble saying words like ‘guacamole’. :) 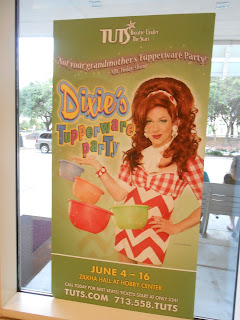 The show was a bit on the sexual side of things.  There were some very inappropriate jokes (that made you crack up) that were not very PC, but it was all in fun.  Trust me, if you name gets called for a giveaway, DON’T GO ON STAGE!   Everyone gets a nametag when you go in the theater with a number on it, if your number gets called you get to go onstage and she gives you a giveaway.  The giveaways are typical Tupperware products (miniature size) but you have to do/say stuff that would have embarrassed me!   It’s all in good fun though, just go with an open mind.
After the show you could purchase real Tupperware products and take pictures with Dixie herself.   Our shuttle was leaving so I had to take a quick picture and leave.  Apparently the top three sales(wo)men in the company are all men in drag who drive around the country selling products.  From what I hear, it’s hundreds of thousands each year.  Great job ladies, umm gentlemen, umm Tupperware person! 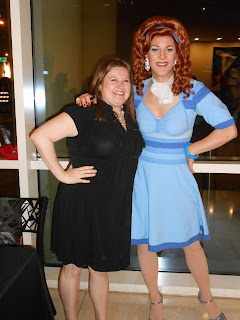