(This is an old post that should have been posted in August, sorry!)


I have always wanted to see a t.v. show being taped, so while in LA I made sure to see one!  When I went in early August, most of the t.v. shows were still on haitus so it was either Jay Leno or Conan O'Brien.  Since I had already had tickets to Jay Leno I decided just to go to him. This is Jay Leno's last year to be on air, so that is another reason I chose him.  I didn't know who the celebrities were going to be on his show that day, but I wanted to go anyway.

The tickets said to be there no later than 3 pm, but I heard that you should get there about lunch time to make sure you get a seat.  I got there just in time too because the line was long!  There is a section that has covered seating, but there were so many people that some had to stand in the sun.  They gave each of us a number based on when we got to the studio, and that is how they decided who got in.  Apparently though there are two lines, one is for friends of the show or friends of the guests, and the other was my line.  Not everyone in my line got to go in though...but I did!! :)

You aren't allowed to take any pictures while there, so I don't have any to show of inside the studio, but the set was smaller (but bigger at the same time) than I expected.  Jay's desk and chairs were in the middle and his band was to the right (my right, his left) and the guest bands equipment were to my left (Jay's right). The decor had a car steering wheel and sort of chrome feel to it.  Very man-ish.

The two guest stars were some model (Karolina Kurkova) and a guy from Breaking Bad (Bryan Cranston).  I don't care anything about models (skinny witches! hahaha, kidding!) and I don't watch t.v. so I wasn't too into that.  I mainly watched how the camera man, makeup artists, producers, etc ran the show.  It was really neat!  There was  a lady that seemed to call the shots from a desk with a phone on it.  She moved her desk when the band that was playing came on and talked with the guests off stage too.

There were interns (I guess they were interns) that were in charge of the line outside and seating us inside.  You could tell they were super bored with their job.  They gave a mini eye roll when people asked questions-I probably would too after a whole summer of that. LOL.  Even while they were watching the show they didn't smile or anything, they just looked bored to be there. Oh well, I had fun!

Afterwards we walked out and people were waiting for the celebrities to drive out.  I did see Jay Leno's car in the parking lot though!  There was a cut out picture of Jay Leno that you could take a picture with, but there was a line so I decided to just take a picture of the cut out. 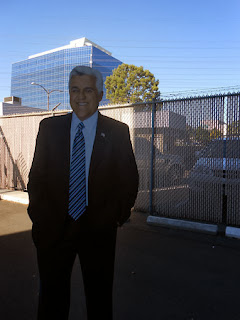 Email ThisBlogThis!Share to TwitterShare to FacebookShare to Pinterest
Labels: celebrities, Fun things I can say I have done