All the Single Ladies

In Houston, we have a morning radio show called The Rod RyanShow on the 94.5 the Buzz.  Each year the morning show hosts a single’s event on Valentine’s Day called Mile of Meat.  I have always heard about it each year, but never had the nerves to actually drive down to where they were.  Since I have turned 30, I have decided that I am having new experiences and this year I was going to this party!  I am did it more for fun than anything.  I mean really, does anyone expect to meet their dream guy at a party called Mile of Meat? Haha.

Here’s how it works:  Single guys submit an application with a picture to the show, 25 guys get picked to be the “Meat”.  On Valentine’s Day morning (7am-10am) the guys line up on Westheimer (near Gessner by Easy Tan) and single women drive by and ‘pick out’ a guy.  The guys are wearing shirts that are numbered 1-25 and the women call into the station to see if Rod accepts them as an applicant.  Rod asked the women random questions to learn more about them.  Later that night all 25 women and men have a meet and greet at Big Woodrow’s off Chimney Rock. 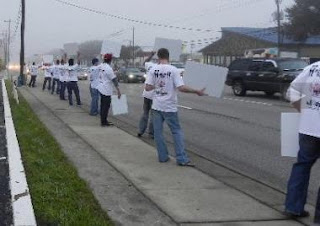 You all know how I love to do fun things, and now that I live on the west side of Houston, of course I drove by!! :)  I had told my boss that I would be a bit late that morning and told him why, he just laughed at me and told me to have fun.   I got up early, got dressed, and headed down Westheimer to where they were standing.  I thought it would be on the left, but literally as soon as I switched lanes I saw them on the right!  Darn it!  I made a u-turn and got in the right lane.  I drove by too fast this time so I turned around again (I know!).   Let me tell you, the sun was blinding, I couldn’t see a thing. Or maybe it was LOVE that was blinding?  Hahahahaha.  Kidding. ;)  Seriously though, I honestly could not see very well because the glare from the windshield (they really should be on the opposite side of the road because of the sun, but I digress).  I didn’t want to drive by again for a 4th time, so I just picked the first cute guy I saw.  #25 was my man.


I called into the show and they asked me a few questions like my age, name, and what celebrity I looked like.  They asked if I could for sure be at Big Woodrow’s at 5:30 and I said yes.  They told me that I needed the radio to be on silent, and to have my windows rolled up completely when I talked to Rod.  I was on hold for about 5 minutes when Rod came on the line, and we were live on the air.  I had texted my sister and told her to listen to the show and she texted me to tell me she was listening.  I was the third girl to call in so I got the guy I wanted (i.e. the only cute guy that I could see with the sun blaring in my eyes).  Rod asked me my age (30) and told me my guys name was Taylor and that he was 24, then he proceeded to call me a cougar!  Haha.  Then he asked what I did for fun because Taylor is really athletic and they need to hook me up with someone who is, when I told him I ran the Houston marathon last month is when I think it was a no brainer that I would be ‘accepted’.  I honestly think that if you have the balls to actually drive by, then you are automatically picked they just need something to say on the radio.  He asked me more questions like my bra size (what?!), what I did for a living, and if I had a tattoo. I told him yes, I did have a tattoo, but my parents didn’t know so I hope they weren’t listening. LOL.  They said he looked like a guy that would be on the cast of Save by the Bell and also Steven Lynch.  Haha.  After we talked I was put back on hold and they told me to show up at 5:30 at Big Woodrow’s for the party that night.

When I got off the phone I called my sister to ask if I sounded like an idiot, she said I did not and was excited for me.  We talked for a bit more, but I kept getting text messages from friends who asked if that was me on the radio just then, and then some of my FB friends also heard me.  Then I got to work and one of our IT guys had heard me and asked me when I was going to tell my parents I had a tattoo.  Wow!  I didn’t think people at work had heard me, that is embarrassing! Oh well! 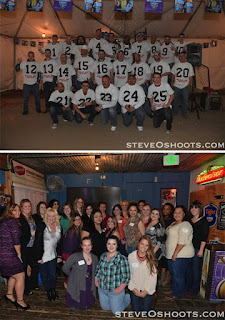 Night event:  I got to Big Woodrow’s right at 5:30 pm and headed inside.  When I walked in all the guys were on the right just dying to see who the girls were that were coming in and to see if that was ‘their girl’. Haha.  I gave them no indication which one I was though. ;)  I checked in and they sent us all upstairs so we would be separated until the event started.  They bought us drinks (woo hoo) and all the girls just chatted away until it was time.  The event was supposed to start right at 6 pm, but since the traffic was so bad (construction plus the All Star game) we didn’t start until closer to 7 pm.


We headed downstairs to meet our guy one by one when we were called on stage, of course I had to pick #25 and was the last one to go on stage.  I walked onstage and Tyler handed me a rose, a bear, and a beer.  <- My kind of guy.  ;) haha.  We walked off stage and were free to mingle with each other and the other 24 couples.  Taylor was so sweet!  I told him I didn’t realize how young he was (I blame the sun!) and I am sure he didn’t want someone who was so much older than him, so he was free to talk to whoever.  He stuck by my side the entire night though and I met two of his friends (who were super sweet also).  Taylor told me that he didn’t even sign up, one of his friends did it but he decided to be a good sport and play along. 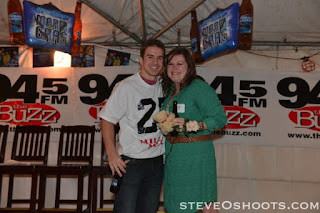 My friend Leslie stuck by us the entire night, holding my purse, taking pictures, and just being an awesome friend.  After a while they had 5 couples at a time play a game (Toilet paper, Beer Head, Plunger Sandpaper, Apple Eating, Banana and Whipped Cream), and we got the Beer Head game which I will not explain for this is not a 50 Shades of Grey blog. ;)  I will however tell you that since I am super competitive, you all can be rest assured that my team won and that we got a super prize pack that I split with Taylor.  The prize package was from Zone Da Erotica, so use your imagination as to what we won. 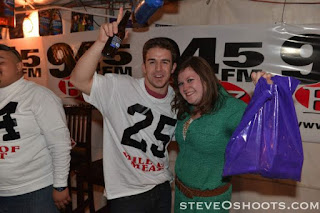 After our game we mingled with everyone until I left around 9:30/9:45 pm.  I had to get home so I could function in the morning; I knew I would have a wicked hangover in the morning.


The day after:  I woke up this morning with a stomachache and a headache…hangover. :/  That’s ok because I had so much fun last night that I couldn’t keep smiling!  I stopped at Starbucks (2 points away from being a Gold Card member..oh yeah!) to get some much needed coffee and headed into work.  My sister called me on the way to tell me that Taylor was caught on camera kissing another girl!  OMG, oh no he didn’t just cheat on me! WTH? Haha.  I always pick the bad boys.  SMH.  I will spare you all of the HEARTBREAKING photo of him cheating on me though. :) Just for fun I emailed the radio station with the email title being “Mile of Meat Cheater”.  This is what I wrote:

“Apparently after I left #25 decided to cheat on me! You would think it would be true love since we won our couples game (beer head), but I guess not.  Hmmmm, someone needs to call him out on the radio.  Maybe you should have both of us on the line at the same time. :)  I'm just kidding, he was really sweet but way too young for me, I am glad he found someone else.


Thank you for hosting the event, I had tons of fun.”


Rod and the gang all made a big deal of it and only read the part on air about  me being upset that he made out with another girl. Oh drama, where would this world be without you?  I couldn’t listen while at work, but I kept getting calls/texts/emails about how we were mentioned on the air several times about it.  Another girl called in and said that I had given him permission (which is true) to talk to whoever. LOL.  Hopefully people realized that I was totally kidding when I sent the email in.  Taylor and I are now friends on FB and he messaged me about it saying he was cracking up in his car and that he knew I was kidding.

So ladies, Taylor is still a super cute single 24 year old Stud Muffin that is just waiting to be snatched up.  I got the hook up on how to contact him so if you are interested let me know.  :) 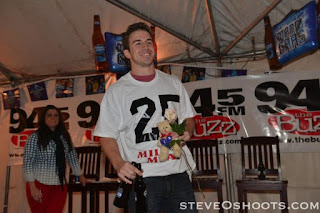 Email ThisBlogThis!Share to TwitterShare to FacebookShare to Pinterest
Labels: Embarrassing stories, Fun things I can say I have done