For Christmas this year I took my niece to the Polar Express Train Ride in Palestine, TX.  I prefer to give experiences as presents instead of actual gifts that they will outgrow or eventually not want anymore.  Plus, (most) kids have so many toys that they don’t need anything new.  I know my niece and nephews get so many presents on Christmas that they don’t even have time to open all of them.

The Polar Express is in Palestine, TX which is about two and a half hours from Houston.  We left the house about noon and I thought we would have plenty of time to make it before the 3:30 pm departure time.  Well, between the cries of “my chicken is too cold” and “I have to go to the bathroom” stops we didn’t make it until 3 pm.  They said to get there about an hour beforehand to make sure to get a parking spot.  I was sweating it out on the drive because I wasn’t sure we had time, but luckily we were able to get a parking space easily.  There was even a few golf carts that were giving people with little kids free (with optional tip) rides to the front. 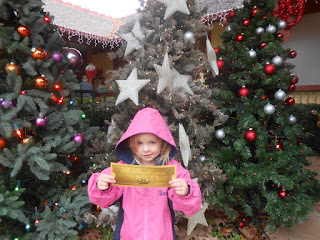 We started moving and they almost immediately served hot chocolate and a chocolate chip cookie to each of us (parents too).  Kali was not interested in the hot chocolate but loved the cookie. 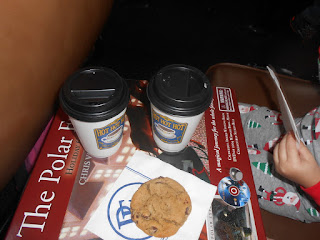 They had a recording over the loud speaker reading the book out loud and each of the servers were holding up a large book. You can buy a wrapped copy of the book with your tickets for $22 but I already had a copy that I won in a silent auction years ago that I just wrapped up and gave to her when we got on the train.

We got to the “North Pole” and there was a few houses with elves and a Santa that were waiving at us.  Santa came on board after all the kids “wished” for him to come.  He magically appeared!  He signed an autograph in Kali’s book (a few other characters did too-Hobo Nick??, the Conductor, and one of the Chef’s) and gave her a bell.  She was very excited that she met Santa. 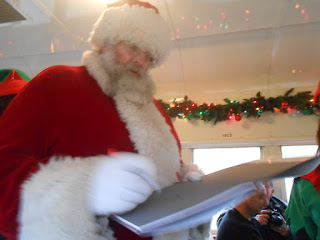 After Santa left there was dancing in the aisle for the rest of the time.  As we were leaving a few of the Chef’s said that Kali was there favorite.  I will admit that she looked super cute in her Santa pj’s and her hair up in pigtails.

Afterward we went to buy souvenirs from the gift shop.  The gift shop isn’t too small (about the same size as a nail salon) but it is crowded with all of the families.  There was so many options to choose from:  conductor hats, whistles, trains, ornaments (a few varieties), shirts, train track sets, etc.  I was only planning on getting an ornament for my collection, but Miss Kali decided that she just had to get a train.  Who am I to say no to that little face? 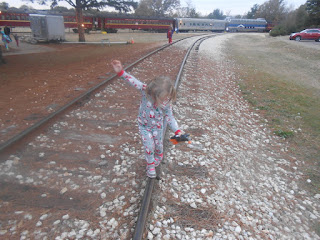 After we walked on the tracks for an hour, we went back to say hello to the train that was coming back.  She didn’t like how loud the train’s whistle was.  We think she has really sensitive ears because she doesn’t like loud noises at all.  We waved goodbye to the train and headed home. 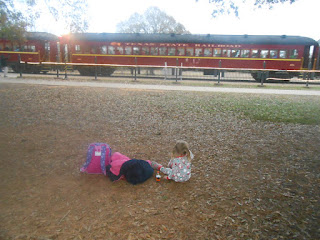 We got our picture taken outside by this sign.  We added it to the photo ornament that we bought to hang on the tree so that we will remember our time. 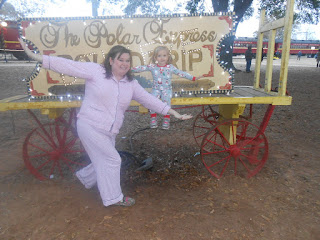 On the way home she watched a movie on the dvd player.  My mom has had this dvd player for years and it always starts over when it hits a bump.  On the way there the car hit a bump and she was so disappointed.  She wanted to “try it just to see” so we did.  When the movie was over she said “I’m so proud of it!” because it didn’t skip. LOL.  She’s too funny.

Posted by Stephanie at Wednesday, December 28, 2016

Email ThisBlogThis!Share to TwitterShare to FacebookShare to Pinterest
Labels: Christmas, Fun things I can say I have done, Kali